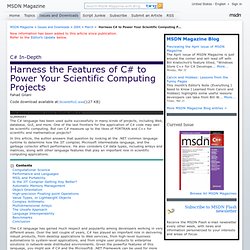 Refer to the Editor's Update below. C# In-Depth Harness the Features of C# to Power Your Scientific Computing Projects Fahad Gilani This article assumes you're familiar with C# The C# language has been used quite successfully in many kinds of projects, including Web, database, GUI, and more. In this article, the author answers that question by looking at the .NET common language runtime to determine how the JIT compiler, Microsoft intermediate language, and the garbage collector affect performance. Flex programming. Algorithms and Data Structures. "Languages come and go, but algorithms stand the test of time" "An algorithm must be seen to be believed. 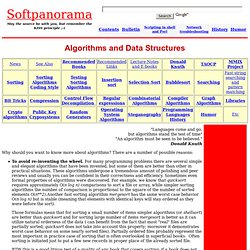 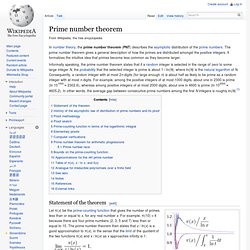 The prime number theorem gives a general description of how the primes are distributed amongst the positive integers. It formalizes the intuitive idea that primes become less common as they become larger. Informally speaking, the prime number theorem states that if a random integer is selected in the range of zero to some large integer N, the probability that the selected integer is prime is about 1 / ln(N), where ln(N) is the natural logarithm of N. 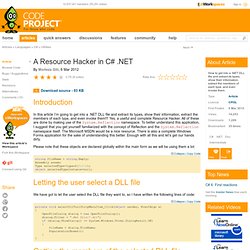 Yes, a useful and complete Resource Hacker. All of these are done by making use of the System.Reflection namespace. To better understand this application, I suggest that you get yourself familiarized with the concept of Reflection and the System.Reflection namespace itself. Please note that these objects are declared globally within the main form as we will be using them a lot: string fileName = string.Empty; Assembly assem; Type selectedType=typeof(Int32); object selectedTypeInstance=null; Letting the user select a DLL file We have got to let the user select the DLL file they want to, so I have written the following lines of code: Getting the members of the selected DLL file The last line of code, there is a call to a method named PopulateListBoxes which populates the listboxes we have on the form.

High Speed Prime Numbers Calculation. A Coder Interview With John D. Cook. Welcome to our continuing series of Code Project interviews in which we talk to developers about their backgrounds, projects, interests and pet peeves. 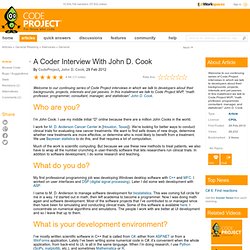 In this installment we talk to Code Project MVP, “math professor, programmer, consultant, manager, and statistician” John D. Cook. Who are you? I’m John Cook. I use my middle initial “D” online because there are a million John Cooks in the world. ASP.NET MVC 4 Highlights, Part 1. By John V. 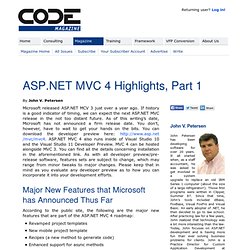 Petersen Microsoft released ASP.NET MCV 3 just over a year ago. If history is a good indicator of timing, we can expect the next ASP.NET MVC release in the not too distant future. Introduction to Cryptography. On Writing Unit Tests for C# Is it realistic to keep to principles of 'Test-First' and 100% coverage for unit tests when in the heat of developing commercial C# applications? 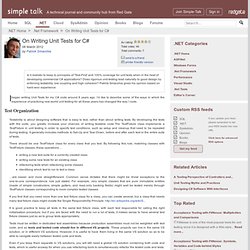 Does rigorous unit-testing lead naturally to good design by enforcing testability, low coupling and high cohesion? Patrick Smacchia gives his opinion based on hard-won experience. I began writing Unit Tests for my C# code around 8 years ago. I’d like to describe some of the ways in which the experience of practicing real-world unit testing for all these years has changed the way I code. Test Organization Testability is about designing software that is easy to test, rather than about writing tests. There should be one TestFixture class for every class that you test. Writing a new test suite for a currently created class writing some new tests for an existing class refactoring tests when refactoring some classes identifying which test to run to test a class …are easier and more straightforward. Test-First and specifications. Fast Mathematical Expressions Parser. Download complete project - 753.2 KB (Release notes) Introduction Many applications require the parsing of mathematical expressions. 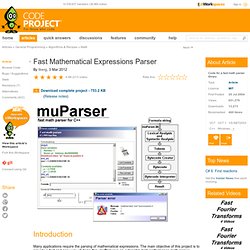 The main objective of this project is to provide a fast and easy way of doing this. muParser is an extensible high performance math parser library. It is based on transforming an expression into a bytecode and pre-calculating constant parts of it. The math parser library is written in pure C++ and should compile on every standard-compliant compiler. Learn to code. Probabilistic Graphical Models.