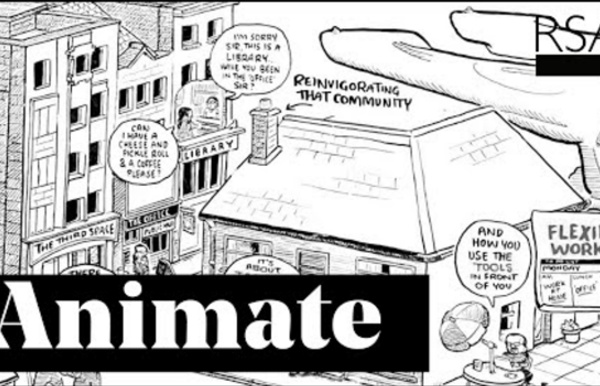 The New Leadership is Horizontal, Not Vertical Several decades ago, when “leadership” became a Big Thing, it was heavily personality-based. It posited Leadership as something done by Leaders, who had learned the art of how to Lead. As a consultant friend of mine, Renee Wingo, put it, “It’s a subject whose proponents can’t figure out whether it’s a noun, a verb, or a gerund.” Leaders were thought of as those who were followed by others. This dichotomy fed the idea that there are two kinds of people in this world – those who lead, and those who follow.

15 Little-Known 'Frozen' Facts Packed Into One Video If you have kids or little brothers and sisters, you've probably seen 'Frozen' ohhh a thousand times by now. But, even if you can sing "Let It Go" forwards and backwards in your sleep, you still might not know everything there is to know about Disney's biggest animated movie ever. For example, did you know that there is a hidden Mickey Mouse in 'Frozen'? Or, that it took a team of 600 animators over 3 MILLION hours to make this movie? These are just some of the little known bits of trivia packed into the latest episode of You Think You Know Movies, which focuses on Disney's modern classic 'Frozen'. 'You Think You Know Movies?'

5 Kickstarter Champs Share the Secrets of Their Success This post originally appeared on the American Express OPEN Forum, where Mashable regularly contributes articles about leveraging social media and technology in small business. Watching your product come to life through public support after pouring blood, sweat and tears into it is every entrepreneur's biggest dream. Kickstarter has become famous for making that a reality, serving as the birthplace of many now-thriving small businesses.

My sister-the-doctor has graduated – just as the world has turned on medical experts Last weekend I went to my sister’s graduation ceremony. A mere seven years, including two maternity leaves, since she started medical school, my little sister is now an actual, swear-to-God, real live doctor. But I need to rephrase that first sentence: it wasn’t a graduation, it was, my sister-the-doctor firmly informs me, an affirmation ceremony (those medical people – such sticklers for accuracy). This is because it was where the new doctors recite the “declaration of a doctor” – essentially an updated version of the Hippocratic oath, promising to “alleviate pain”, and so on. It was very moving to hear this declaration in a hall in Westminster, but also strange, at a time when the main medical story in the news is the Charlie Gard case. Others, though, have made a different diagnosis.

Einstein's Puzzle # Copyright (C) 2004 Lauri Karttunen # # This program is free software; you can redistribute it and/or modify # it under the terms of GNU General Public License as published by # the Free Software Foundation; either version 2 of the License, or # (at your option) any later version. # This program is distributed in the hope that it will be useful, # but WITHOUT ANY WARRANTY; without even the implied warranty of # MERCHANTABILITY or FITNESS FOR A PARTICULAR PURPOSE. See the # GNU General Public License for more details. Einstein's Puzzle Variations of this riddle appear on the net from time to time. It is sometimes attributed to Albert Einstein and it is claimed that 98% of the people are incapable of solving it.

Gods and Goddesses [Gods and Aliens] When you study the mythologies of ancient civilizations, you realize they are all designed by the same geometric blueprint that follows into humanity's current timeline. In the physical we find duality on all levels, especially in the pantheons of creational forces linked to one another. We further find the pattern of creation and destruction ... repeating in the cycles of time ... embracing the human experience. Designing the gods and goddesses falls into the same categories of duality - good and bad - light and dark - forever seeking balance and the return to full consciousness. Six-Figure Businesses Built for Less Than $100: 17 Lessons Learned Photo: 401K. The following article is a guest post by Chris Guillibeau, who’s traveled to 150+ countries and studied more micro-businesses than anyone I know. I hope you love this piece as much as I did.

Who are ‘experts’, anyway? Over the past months senior politicians in the UK have called into question the role of experts in politics. Much of this view is linked to the Brexit debate and Michael Gove’s comment that ‘people in this country have had enough of experts’. He was responding to alarming predictions from economic experts, including the governor of the bank of England, the IMF, the treasury, and the OECD. Pundits in the elite press, from the Economist to the Financial Times gave the same message. The meaning of the term ‘expert’ in this context was linked to an institutionally and professionally established role. News - Is it good for people to fail occasionally? 2 March 2014Last updated at 19:47 ET By Lucy Wallis BBC News In our highly competitive world, we prize success and hate it when things go wrong, but is there actually a value in failing? When Irish author Flann O'Brien submitted the manuscript for his second book, The Third Policeman, to a London publisher in 1940 it was rejected. But rather than admit this lack of success to his friends, he pretended the manuscript had accidentally blown out of the boot of his car on a trip to Donegal and had been lost forever.

Love American Skin Last week German photographer and filmmaker Diana Scheunemann unveiled her probing debut film, Love American Skin, a road trip across America that documented the many contrasting characters and viewpoints that make up one of the biggest nation’s in the world. Compelling watching, the film throws up opinions that may ruffle a few feathers but adds to our understanding of the vastness of the country, and the differences that one encounters from state to state. We catch up with Diana to talk through her experiences of making the film. Me and my partner had been living in NYC for a few years. You hear all these partisan views on the TV but we wanted to see for ourselves what this country we now live in is like, and form an opinion based on our own experience instead of from Hollywood movies and charged news commentators.

Sean Parker's Airtime Officially Launches The much hyped, yet highly secretive Airtime, founded by Sean Parker and Shawn Fanning, has finally revealed itself to be a browser-based video chatting application to help you create shared experiences with people you know and people you’ve never met before. The app lets you connect with existing Facebook friends, but most importantly, it connects you anonymously with strangers, finding them in relation to your location and interests. Essentially, it’s like Chat Roulette, but not nearly as creepy, and with little to zero nudity. From Jimmy Fallon, who opened the event presentation (Joel Mchale, Ed Helms, Jim Carrey and Snoop Dogg also took part): “Airtime is going to change the whole way we connect on the Internet.” It allows you to “make new friends based on interests.

Earth Day 2017: ‘The experts are fighting back’ ‘An exuberant rite of spring” is how the New York Times described 22 April, 1970. In Manhattan, and across America, “huge, light-hearted throngs ambled down autoless streets.” Earth Day had been born, an outburst of protest – and revelry – that involved everyone from save-the-whales activists to opponents of new freeways. Denis Hayes, now 72, was the man tasked with organising it. “What we did was pull together an event that told all of those people, ‘You know you’ve really got something in common and this should be one big movement where we’re supportive of one another’.” It sparked, he tells me, the most profound change in American society since the New Deal.