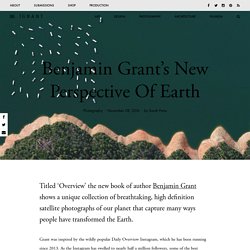 Grant was inspired by the wildly popular Daily Overview Instagram, which he has been running since 2013. As the Instagram has swelled to nearly half a million followers, some of the best images have been collected for a miscellany. The project was developed during a space expedition by astronauts who spend extended periods of time in cosmic space. The book contains more than 200 original images of industry, agriculture, architecture, and nature that demonstrate graphically breathtaking patterns across the Earth’s surface. Colourful Aerial Landscapes Of Salt Ponds In San Francisco By Cris Benton. Cris Benton, a retired professor of architecture and former department chair at UC Berkeley captures these colourful and impressive landscapes of the San Francisco Bay area using a radio-controlled camera, for his book “Saltscapes”… 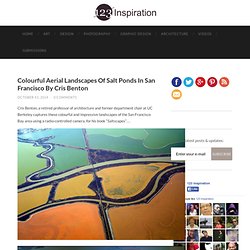 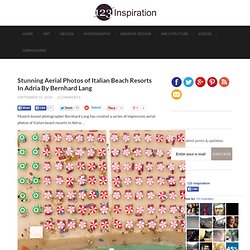 Daily Overwiew changes your perception of Earth. Daily Overview is an amazing project that shares one satellite photo from Digital Globes a day in an attempt to change the way we see our planet Earth. 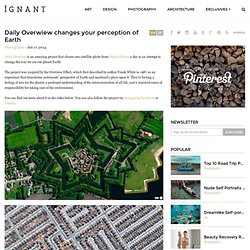 The project was inspired by the Overview Effect, which first described by author Frank White in 1987 as an experience that transforms astronauts’ perspective of Earth and mankind’s place upon it. They’re having a feeling of awe for the planet, a profound understanding of the interconnection of all life, and a renewed sense of responsibility for taking care of the environment. You can find out more about it in the video below. You can also follow the project via Instagram, Facebook or Tumblr. Tito Mouraz. Die Serie ‘Open Space Office’ wurde von Tito Mouraz über einen Zeitraum von 2 Jahren in Portugal aufgenommen. 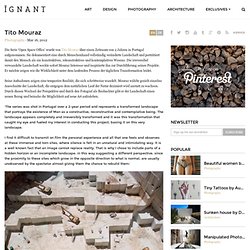 Sie dokumentiert eine durch Menschenhand vollständig veränderte Landschaft und porträtiert damit den Mensch als ein konstruktives, rekonstruktives und kontemplatives Wesens. Harbor Aerial View Photography. Paul0v2 Tue, 11/12/2013 - 13:39 I never imagined seeing a Harbor from an aerial view and now that I did it's super awesome, so many colors and shapes make you feel on a game of tetrix. Take a look how small everything is and how cool is the view from above. Enjoy! These photos were taken by German photographer Bernhard Lang, for more visit bernhardlang.de/. Share this post with your friends and followers using: Aerial Photos of Botswana Wildlife. Zack Seckler created pictures of animals, vegetation and salt ponds in Botswana from 500 feet above the ground. 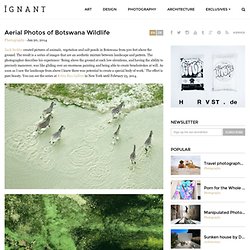 The result is a series of images that are an aesthetic mixture between landscape and pattern. The photographer describes his experience: ‘Being above the ground at such low elevations, and having the ability to precisely maneuver, was like gliding over an enormous painting and being able to create brushstrokes at will. As soon as I saw the landscape from above I knew there was potential to create a special body of work.’ The effect is pure beauty. You can see the series at Robin Rice Gallery in New York until February 23, 2014. Kite Aerial Photography: Seeing the World from New Heights. Sometimes, pointing and clicking just isn’t enough. 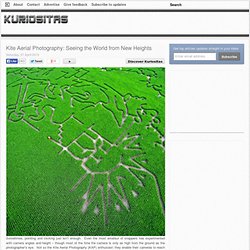 Even the most amateur of snappers has experimented with camera angles and height – though most of the time the camera is only as high from the ground as the photographer's eye. Not so the Kite Aerial Photography (KAP) enthusiast: they enable their cameras to reach for the sky with often spectacular results. Observing the Earth, Beautiful Satellite Photos of Earth from the ESA. iGNANT. On a trip to Sicily, Mauritius and Morocco photographer Joseph Ford spent several days flying around over all sorts of terrain in a helicopter. 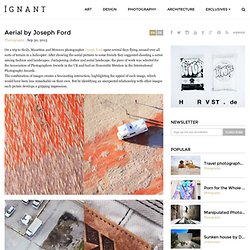 After showing the aerial pictures to some friends they suggested shooting a series mixing fashion and landscapes. Juxtaposing clothes and aerial landscape, the piece of work was selected for the Association of Photographers Awards in the UK and had an Honorable Mention in the International Photography Awards. Aerial photographer. Jason Hawkes. Aerial Photography. Kaleidoscope-Inspired Aerial Landscape Photography by David Thomas Smith. 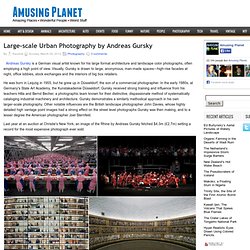 Visually, Gursky is drawn to large, anonymous, man-made spaces—high-rise facades at night, office lobbies, stock exchanges and the interiors of big box retailers. He was born in Leipzig in 1955, but he grew up in Düsseldorf, the son of a commercial photographer. In the early 1980s, at Germany's State Art Academy, the Kunstakademie Düsseldorf, Gursky received strong training and influence from his teachers Hilla and Bernd Becher, a photographic team known for their distinctive, dispassionate method of systematically cataloging industrial machinery and architecture. Gursky demonstrates a similarly methodical approach in his own larger-scale photography. 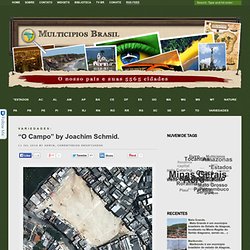 [Image: (top) The "remains of White Castle Fort"; (bottom) the "remains of the Northshield Rings. " Photos courtesy of the Royal Commission on the Ancient and Historical Monuments of Scotland]. "As the glaciers of the last Ice Age receded," we read, "Scotland's earliest ancestors ventured northwards, exploring a wild, fertile territory. Nomadic hunter-gatherers at first, they made the decision to stay for good—to farm and to build. Aerial Photographs of Ethiopia's Danakil Desert, the Hottest Place on Earth. Jamey Stillings - Project Photography on the Ground and in the Air. Joachim Schmid. O Campo, or in its translation The Field, is a series of photographs of football fields in Brazilian cities. The images were taken via satellite and they show the rather oddly shaped football pitches that seem to be built wherever possible – the desire for playing the game has clearly surpassed and ignored the limitations of natural topography and FIFA’s laws of the game.

‘It is a river! Bas Princen. Rotterdam-based photographer Bas Princen was first trained as an architect, before earning a reputation for documenting the vast structures and spaces he might once have helped create. With his photographs of giant construction sites and apparently absurd human artefacts he describes the oddity of human ‘civilisations’. ‘I go out to find photographs in which the artificial and the natural take each other’s forms and in which one is unable to see if things are being constructed or destroyed. I think that is the most interesting thing that can be said right now about the cities in which we live, and the landscapes in which we dwell (and vice versa).’ Aerial Photos of Tulip Fields In The Netherlands. Aerial Photography by Bernhard Edmaier. This fantastic aerial photo of NYC turns Manhattan into 'Sim City'

Brett Beyer. The Architectural Firm OMA recently completed construction of Milstein Hall at Cornell University’s College of Architecture Art, and Planning. Stunning Aerial Photography by Edward Burtynsky. Aerial Photography by Gray Malin. Stephan Zirwes. Hanging out of a helicopter, Stephan Zirwes questions our reality while the world is presented to him on a platter. He searches for patterns, structures, connections, uniformities and contrasts, is that a cornfield or a doormat? Hong Kong Streets Transformed Into a Retro 2D Games. ‘Honkey Kong’, a brilliant photo series by Stockholm-based photographer Christian Åslund. The photos were created as part of an ad campaign for the shoe brand Jim Rickey… Life On The Edge. Edgar Martins. From Below. Room Portraits. House Watch.