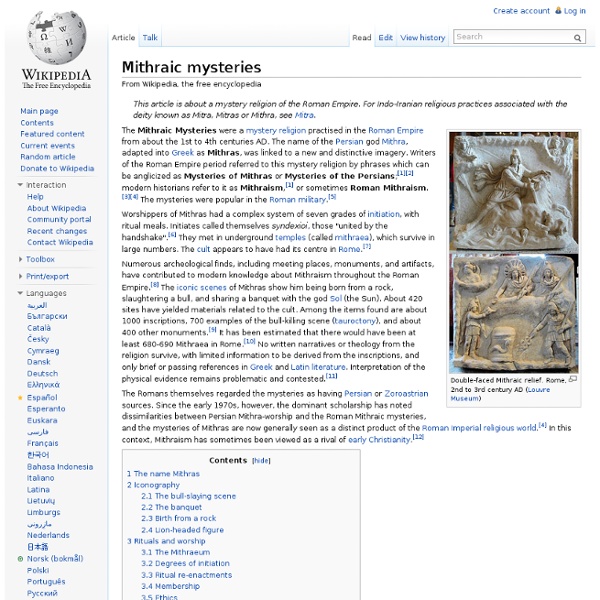 Double-faced Mithraic relief. Rome, 2nd to 3rd century AD (Louvre Museum) The Mithraic Mysteries were a mystery religion practised in the Roman Empire from about the 1st to 4th centuries AD. The Romans themselves regarded the mysteries as having Persian or Zoroastrian sources. Rock-born Mithras and Mithraic artifacts. The name Mithras[edit] The name Mithras (Latin, equivalent to Greek "Μίθρας",[13]) is a form of Mithra, the name of an Old Persian god.[14][15] (This point has been understood by Mithras scholars since the days of Franz Cumont.[16]) An early example of the Greek form of the name is in a 4th-century BC work by Xenophon, the Cyropaedia, which is a biography of the Persian king Cyrus the Great.[17] Related deity-names in other languages include Iranian "Mithra" and Sanskrit "Mitra" are believed to come from an Indo-Iranian word mitra meaning "contract, agreement, covenant".[24] Modern historians have different conceptions about whether these names refer to the same god or not.

Sol Invictus Coin of Emperor Probus, circa 280, with Sol Invictus riding a quadriga, with legend SOLI INVICTO, "to the Unconquered Sun": the Emperor (at left) wears a radiated solar crown, worn also by the god on the obverse The idea, particularly popular in the 18th and 19th centuries, that the date of 25 December for Christmas was selected in order to correspond with the Roman festival of Dies Natalis Solis Invicti, or "Birthday of the Unconquered Sun", is challenged today. Invictus as epithet[edit] Sol Invictus played a prominent role in the Mithraic mysteries, and was equated with Mithras himself.[15] The relation of the Mithraic Sol Invictus to the public cult of the deity with the same name is unclear and perhaps non-existent.[16] Elagabalus[edit] Aurelian[edit] The Roman gens Aurelian was associated with the cult of Sol.[20] After his victories in the East, the Emperor Aurelian thoroughly reformed the Roman cult of Sol, elevating the sun-god to one of the premier divinities of the Empire.

Five Temperaments Five temperaments is a theory in psychology, that expands upon the Four Temperaments proposed in ancient medical theory. The development of a theory of five temperaments begins with the Two-factor models of personality and the work of the late William Schutz, and his FIRO-B program. It is a measure of interpersonal relations orientations that calculates a person's behavior patterns based on the scoring of a questionnaire. Although FIRO-B does not speak in terms of "temperament", this system of analysis graded questionnaires on two scales in three dimensions of interpersonal relations. When paired with temperament theory, a measurement of five temperaments resulted.[1] History and the ancient four temperaments[edit] This is also related to the classical elements of air, water, earth, and fire; as sanguine, phlegmatic, melancholic, and choleric, respectively. Development of related "two factor" models and the regaining popularity of the ancient temperaments[edit] The FIRO-B connection[edit]

Acupuncture Modern Views Acupuncture Facts Acupuncture Modern Views When the human body was finally described in terms of cells, biochemicals, and specific structures (most of this accomplished less than 150 years ago), the Chinese method of acupuncture and its underlying concepts were evaluated in these new terms. As a first effort, researchers sought out physical pathways that might correspond to the meridians, and even a fluid substance that might correspond to qi. Neither of these were found. From the modern perspective, diseases and injuries are resolved by a complex set of responses; the responses are coordinated by several signaling systems. Modern studies have revealed that acupuncture stimulates one or more of the signaling systems, which can, under certain circumstances, increase the rate of healing response. This modern explanation of how acupuncture works does not explain why the acupuncture points are arrayed along the traditional meridian lines. Please also visit the website of

7 'Ancient' Forms of Mysticism That Are Recent Inventions scion_cho The secret collection of ninja skills and wisdom known as "ninjutsu" has been around for like a thousand years, and you're still able to learn it today, despite the fact that modern America lacks a strict class system, honor-based fighting rules and any real opportunities for assassinating feudal lords. Throw a shuriken in your average martial arts dojo and it'll hit someone offering to teach you ninjutsu. Maybe you'll even end up getting invited to one of those secret underground death fights! Getty"I can teach you nine ways to kill a man for a Mounds bar and some soda." The Reality: We've already revealed that ninjas never wore black jumpsuits and masks like Hollywood taught us. Getty"Hey, a mysterious stranger! GettyAbove: Karate. Getty As newspaper articles and Dan Brown alike tell us every time the date rolls around, Friday the 13th's bad reputation dates back to October 13, 1307. "From now on, stupid people will avoid driving or gambling on the anniversary of this day."