Imperial Japan, the Bomb & the Pacific Powder Keg. Letter of Recommendation: Fortean Times. Photo I was 30,000 feet in the air and halfway through the November issue of Fortean Times before I considered what it must look like to the woman sitting to my left. 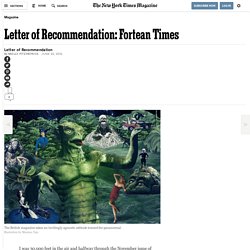 On the cover of the magazine lurked a giant Lizard Man, with a rippling reptilian 14-pack, orange eyes with vertical-­slit pupils, a forked tongue, a jaw lined with needle teeth. He was wading between lily pads in standing water, before a moonlit, misty backdrop. “A lot of things that seem simple aren’t so simple”: Seymour Hersh on the untold story of Osama bin Laden killing and the way Washington — and the media — really work. Investigative reporter Seymour Hersh broke the story of the My Lai massacre in 1969. 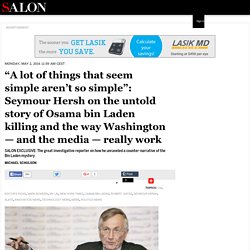 He was the first to report the atrocities at Abu Ghraib prison, back in 2004. Hersh’s most recent break threatens to blur the boundary between investigative reporting and conspiracy theory. A Unified Theory of Corruption - The Deep State. The Holy Grail of physics has always been to find what Einstein called a Unified Field Theory, or, as we’ve come to know it today, a theory of everything. 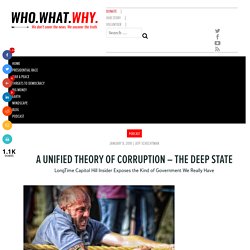 One idea, one set of equations that could explain the physical universe. Imagine if such a thing existed in government and politics. “Serial” Season Two Is Here. This morning at 6 A.M., “DUSTWUN,” the first episode of season two of the “Serial” podcast, quietly made its début. 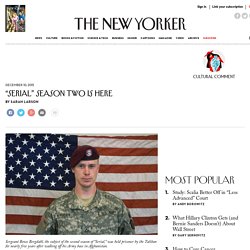 It’s the first chapter in a season-long exploration of the case of Bowe Bergdahl, the American former prisoner of war. Bergdahl walked off his Army base in Afghanistan in 2009, and he was soon captured by the Taliban. Six U.S. soldiers who were killed in Afghanistan after his disappearance, some claim, died directly or indirectly because of his actions. The Bomb Didn’t Beat Japan… Stalin Did. The U.S. use of nuclear weapons against Japan during World War II has long been a subject of emotional debate. 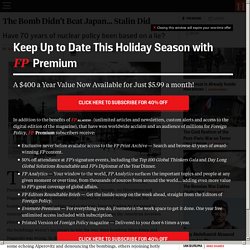 Initially, few questioned President Truman’s decision to drop two atomic bombs, on Hiroshima and Nagasaki. But, in 1965, historian Gar Alperovitz argued that, although the bombs did force an immediate end to the war, Japan’s leaders had wanted to surrender anyway and likely would have done so before the American invasion planned for November 1. Their use was, therefore, unnecessary. Obviously, if the bombings weren’t necessary to win the war, then bombing Hiroshima and Nagasaki was wrong. John McCain is Not a Hero! 'Manchurian Candidate' His POW Commanding Officer Submitted a Charge of Treason to Military Prosecutors! (Before It's News) I served as a Marine infantryman in Vietnam during 1969 and 1970. 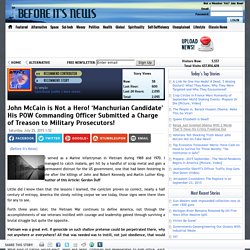 I managed to catch malaria, get hit by a handful of scrap metal and gain a permanent distrust for the US government, one that had been festering in me after the killings of John and Robert Kennedy and Martin Luther King. Author of this Article: Gordon Duff. From the Bacon's rebellion to the Boston Bombing: How well do you know American extremism? a quiz. Carpet-Bombing History. J. 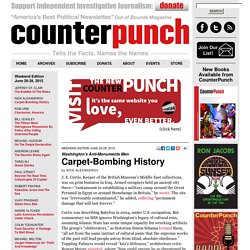 E. Curtis, Keeper of the British Museum’s Middle East collections, was on grim business in Iraq. Armed occupiers held an ancient city there—“tantamount to establishing a military camp around the Great Pyramid in Egypt or around Stonehenge in Britain,” he wrote. The site was “irrevocably contaminated,” he added, suffering “permanent damage that will last forever.” Curtis was describing Babylon in 2004, under U.S. occupation. “Palmyra,” Moore emphasized, “is an ancient Roman site whose significance and value is exceeded by very few others: those in Rome itself, Pompeii, possibly Petra in Jordan.”

The Enduring Lies of Ronald Reagan. Though the GOP continues to canonize the fortieth president, we can’t forget his legacy as a liar and a foreign policy flop The canonization of Ronald Reagan rests crucially on one thing Reagan himself did well: forgetting the facts. 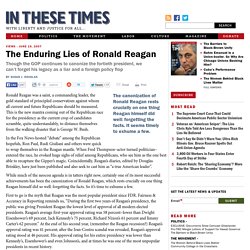 It seems timely to exhume a few. Ronald Reagan was a saint, a commanding leader, the gold standard of principled conservatism against whom all current and future Republicans should be measured. This is the new mantra coming out of the Republican race for the presidency as the current crop of candidates scramble, quite understandably, to distance themselves from the walking disaster that is George W. Bush. Ronald Reagan’s wartime lies: The president had quite a Brian Williams problem. When it emerged that NBC News anchor Brian Williams had misled the public for years with a harrowing account of coming under enemy fire on a military helicopter during the 2003 invasion of Iraq, observers were quick to draw comparisons with other public figures caught telling tall tales about combat experiences. 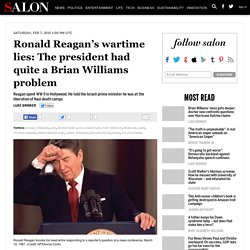 Some hearkened back to Hillary Clinton’s bogus 2008 assertion that she had landed “under sniper fire” during a trip to Bosnia a dozen years earlier; in reality, video from the trip showed a smiling Clinton and her daughter walking calmly on the tarmac, with no sign of trouble whatsoever. There’s another figure who merits mention in this discussion, one whose serial blurring of lines between fiction and reality was a mainstay of his public career. That figure, of course, was Ronald Reagan.

Reagan’s fibs were manifold. Once in office, Reagan’s deception in the Iran-Contra scandal briefly threatened his presidency. Antipas Ministries. GEORGE BUSH, THE "PROMISE KEEPERS," THE PRINCIPLES OF MESSIANIC LEADERSHIP. By: S.R. 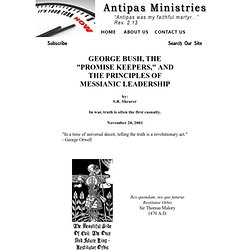 Iran-Contra Revisited. "At last, the Reagan administration's Iran-Contra affair finally has a comprehensive history worthy of the scandal ... Malcolm Byrne has told the complex story in brilliant fashion. "— Seymour Hersh Advance praise for Iran-Contra: Reagan's Scandal and the Unchecked Abuse of Presidential Power by Malcolm Byrne: "A remarkable book about a remarkable scandal that shook American politics more than a quarter century ago. " Soldiers, Spies and the Moon: Secret U.S. and Soviet Plans from the 1950s and 1960s. Earth rising behind the moon. (Photo courtesy of NASA, Lewis Research Center) Washington, DC, July 20, 2014 – Forty-five years ago, astronaut Neil Armstrong took his "one small step" for mankind, becoming the first person to set foot on the moon.

The program that resulted in that historic event — managed by the National Aeronautics and Space Administration (NASA) — had been a very public one ever since its announcement by President John F. Kennedy in 1961. Even the Soviet government had publicized aspects of its own effort. But there were also highly secret elements to the U.S. and Soviet schemes, which are the subject of today's National Security Archive posting of previously classified records. Mithraic mysteries. Double-faced Mithraic relief. Rome, 2nd to 3rd century AD (Louvre Museum) The War at Home. Most Americans of a certain age can recall exactly where they were and what they were doing on October 20, 1964, when word came that Herbert Hoover was dead. The heart and mind of a nation stopped.

But how many recall when and how they first became aware that one or another of the Bill of Rights had expired? For me, it was sometime in 1960 at a party in Beverly Hills that I got the bad news from the constitutionally cheery actor Cary Grant. He had just flown in from New York. He had, he said, picked up his ticket at an airline counter in that magical old-world airport, Idlewild, whose very name reflected our condition. The Meaning of Timothy McVeigh. Obama’s New Ukraine. Navy Captain Fired After Leading Unauthorized Whaling Expedition. Mae Brussell: Jonestown Was a CIA Mind Control Experiment (12-01-1978) PT 1 of 3. Buddhist Extremist Cell Vows To Unleash Tranquility On West. Boston, False Flags and the Strategy of Tension. A Coincidence Theorist’s Guide to Political Assassinations. How alien conspiracists are just like creationists. Why I am no longer a skeptic. Is this proof the Virgin Queen was an imposter in drag? Shocking new theory about Elizabeth I unearthed in historic manuscripts.

World War III began in May 2006: Building the New Map of the Middle East in Real Time. I. I Was A CIA Sex Slave. The Bomb Didn't Beat Japan... Stalin Did - By Ward Wilson. The U.S. use of nuclear weapons against Japan during World War II has long been a subject of emotional debate. Initially, few questioned President Truman's decision to drop two atomic bombs, on Hiroshima and Nagasaki. How To Respond To An Anti Conspiracy Theorist.