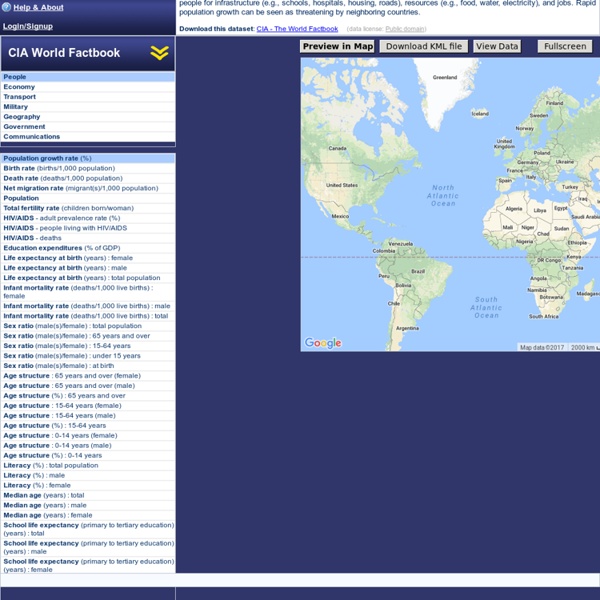 Atlas for the End of the World Précis On May 20, 1570, Abraham Ortelius, book collector and engraver from Antwerp, published the Theatrum Orbis Terrarum (Epitome of the Theater of the World), the world's first atlas… Read more Essay: Atlas for the End? How We Share the World This interactive graphic shows how the world is divided according to six different socioeconomic variables. The land area of each country represents its share of the worldwide total. Click on a circle to reshape the map For attribution and data sources, scroll to the bottom. I have been having fun experimenting with cartograms lately.

The top 20 data visualisation tools One of the most common questions I get asked is how to get started with data visualisations. Beyond following blogs, you need to practise – and to practise, you need to understand the tools available. In this article, I want to introduce you to 20 different tools for creating visualisations: from simple charts to complex graphs, maps and infographics. Almost everything here is available for free, and some you have probably installed already. Entry-level tools

Map Projections & What They Say About You Comic by Randall Munroe at XKCD Most people go through life perfectly happy in the knowledge that the real earth looks like it does on a standard Mercator projection map. Cartographers, map nerds and those that have seen this scene from the West Wing know that this is not really the case. Wikipedia sums up why map projections are necessary in the first place: Map projections are necessary for creating maps. All map projections distort the surface in some fashion. Trainspotting: Europe's railway lines - Views of the World Passenger transport in Europe is largely dominated by cars. In the past decade, cars kept a consistent share of around 83 per cent of the modal split within the European Union, followed by buses and coaches (around nine per cent in most recent statistics) and trains (between seven and eight per cent). The modal split describes these modes of transport as ‘transport kilometres travelled by all inland passengers’. In the debate about sustainable development, this is an important measure to monitor the environmental and social impacts of the specific modes of transport. Cars are generating the most emissions and pollution per passenger kilometre and also have significantly higher accident rates.

Geology of Britain Functionality to search for a borehole can be found under the Menu button, when the Boreholes data mode is selected: In this mode, boreholes are displayed on the map. In ‘3D Below ground’ mode boreholes sticks are displayed below the Earth’s surface. Mapping that changes lives – UCL Antenna “It is not just women and men in Latin American cities but dwellers living in informal settlements across African and Asian cities that face similar avoidable and often invisible risk traps that deny their right to the city.” Risk traps Between 2012 and 2017, a new wave of students studying the UCL/DPU MSc in Environment and Sustainable Development spent several weeks in Lima, having prepared themselves in London with in-depth research that builds upon previous year’s results and contributions. The students have a variety of disciplinary backgrounds, such as environmental studies, architecture, sociology and engineering, adding fresh eyes that complement and benefit from the different phases of the research project. Over the years, the team also enlisted Peruvian young professionals as interns, to support the UCL students and to strengthen the local capacity and legacy of the project. Fires and ruptured sewage pipes occur often in Barrios Altos.

World trade system in danger of being torn apart, warns IMF The postwar global trading system risks being torn apart, the International Monetary Fund has warned, amid concern over the tariff showdown between the US and China. In a sign of its growing concern that protectionism is being stimulated by voter scepticism, the IMF used its half-yearly health check for the world economy to tell policymakers they needed to address the public’s concerns before a better-than-expected period of growth came to an end. Maurice Obstfeld, the IMF’s economic counsellor, said: “The first shots in a potential trade war have now been fired.”

Getting Started with Google Tour Creator Visit Tour Creator and press “Get Started” – as this new service rolls out Tour Creator may not yet be available to all accounts and it may require admin to tun on Poly and Tour Creator – while you are waiting you sign in with your GMail Account.Press “+ New Tour” Give your tour a Title, Description and Cover Image and press Create. Press Add Scene to add additional images to your tour. You can now either select 360 Panorama’s from Google Maps (including content added by other users) or upload your own images. Photospheres must have a 2:1 aspect ratio. Omnistereo panoramas must have a 1:1 aspect ratio. Once you have selected or uploaded an image you can add some text details about that scene.