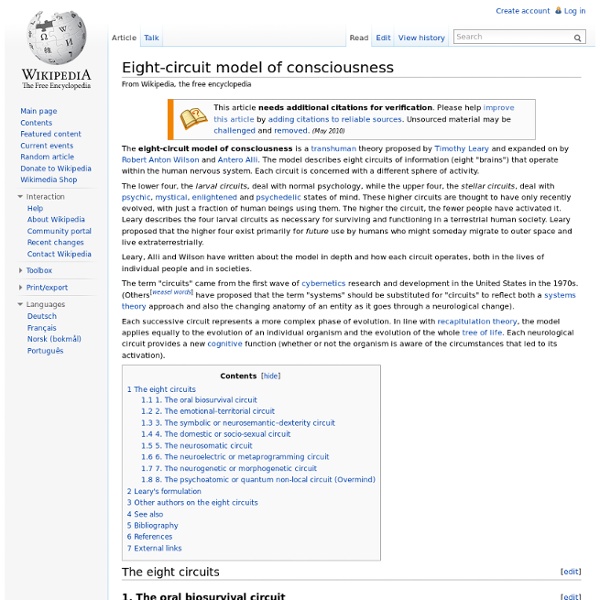 The eight-circuit model of consciousness is a theory proposed by Timothy Leary and expanded on by Robert Anton Wilson and Antero Alli. The model describes eight circuits of information (eight "brains") that operate within the human nervous system. Each circuit is concerned with a different sphere of activity. Leary, Alli and Wilson have written about the model in depth and how each circuit operates, both in the lives of individual people and in societies. The term "circuits" came from the first wave of cybernetics research and development in the United States in the 1970s. The eight circuits[edit] 1. This circuit is concerned with nourishment, physical safety, comfort and survival, suckling, cuddling etc. This circuit is activated in adults by opioids such as morphine and heroin. A positive imprint sets up a basic attitude of trust. This circuit is said to have appeared in the earliest evolution of the invertebrate brain and corresponds to the reptilian brain of triune brain theory. 2. 3.

Erik Erikson Although Erikson lacked even a bachelor's degree, he served as a professor at prominent institutions such as Harvard and Yale. Early life[edit] Erikson's mother, Karla Abrahamsen, came from a prominent Jewish family in Copenhagen. She was married to Jewish stockbroker Valdemar Isidor Salomonsen, but had been estranged from him for several months at the time Erik was conceived. Little is known about Erik's biological father except that he was a Danish gentile. Following Erik's birth, Karla trained to be a nurse and moved to Karlsruhe. At Das Humanistisch Gymnasium his main interests were art, history and languages, but he lacked interest in school and graduated without academic distinction.[5] After graduation, instead of attending medical school, as his stepfather had desired, he attended art school in Munich, but soon dropped out. Psychoanalytic experience and training[edit] In 1933 he received his diploma from the Vienna Psychoanalytic Institute. North America[edit] Bibliography[edit]

Hard problem of consciousness The existence of a "hard problem" is controversial and has been disputed by some philosophers.[4][5] Providing an answer to this question could lie in understanding the roles that physical processes play in creating consciousness and the extent to which these processes create our subjective qualities of experience.[3] Several questions about consciousness must be resolved in order to acquire a full understanding of it. These questions include, but are not limited to, whether being conscious could be wholly described in physical terms, such as the aggregation of neural processes in the brain. If consciousness cannot be explained exclusively by physical events, it must transcend the capabilities of physical systems and require an explanation of nonphysical means. For philosophers who assert that consciousness is nonphysical in nature, there remains a question about what outside of physical theory is required to explain consciousness. Formulation of the problem[edit] Easy problems[edit] T.H.

America’s Broadband Crisis | Wireless for America This country has been challenged to make broadband available to 98 percent of Americans. It’s a challenge to lay the foundation for education, innovation and equal opportunity in the 21st century. Unfortunately, recent research shows that our country ranks No. 15 in broadband penetration. We rank No. 26 in broadband speed, behind countries such as South Korea and even Romania. The Shrinking Spectrum With hundreds of millions of Americans using smartphones, tablets, and other devices to access the Internet, wireless spectrum is nearly at capacity. The result? A Restrictive Duopoly An even more pressing issue that is slowing broadband momentum is the wireless industry’s competitive landscape. And our nation is paying the price, because without a vibrant broadband economy, innovation, education, creativity, and discovery all will suffer – at a time when we can least afford it. American Ingenuity and Our Broadband Future Just as important, this fix will come from American ingenuity.

Spotify vs. Rdio vs. Grooveshark: features showdown – Cell Phones & Mobile Device Technology News & Updates 2011 has been the year of on-demand music. Spotify‘s US arrival, Facebook Music, and faster mobile data speeds contributed to skyrocketing subscriptions. This is our feature-by-feature breakdown of three top streaming services: Spotify, Rdio, and Grooveshark. Mog, Rhapsody, and Napster could have been included, but we chose these three based on their larger catalogues. We have also spent the most time hands-on with them. Songs Picking a service with a quality music library is essential. Grooveshark’s library is hard to quantify: much like YouTube, it consists of user uploads and dances around the DMCA. Albums as playlists Spotify and Rdio let you easily save any album to a playlist. Facebook integration Until a few months ago, you could sign up for Spotify without a Facebook account. Rdio heavily pushes its Facebook integration and encourages you to sign in with it. Forced public sharing Rdio doesn’t offer any way to turn off public sharing. Sharing individual playlists Mobile apps Summing up

David Chalmers David Chalmers I am a philosopher at New York University and the Australian National University. Officially I am Professor of Philosophy and co-director of the Center for Mind, Brain, and Consciousness at NYU, and also (20% time) Professor of Philosophy at ANU. I work in the philosophy of mind and in related areas of philosophy and cognitive science. I am especially interested in consciousness, but am also interested in all sorts of other issues in the philosophy of mind and language, metaphysics and epistemology, and the foundations of cognitive science. This site includes quite a bit of my own work (e.g. all of my papers), and it also includes a number of resources I've put together on topics related to consciousness and/or philosophy: e.g., MindPapers (a bibliography), directories of online papers, and some philosophical diversions. What's New: Three Puzzles About Spatial Experience, Why Isn't There More Progress in Philosophy? Background Activities Research

Muscles Used When Pedaling The value of these two diagrams created by Stephen Lardson (USA Cycling Coach) is just outstanding. I have gotten several requests for references on this diagram so here is what I have found for those of you doing research projects at university.(Morphed Bianchi Camaleonte IV 2006, Ridley Damocles 2006, Garmin, Mac) It really lets you know what muscles are working and when during the pedal stroke. One observation I can make is that the hip extensors are used during the power stroke. 1) Weak Glutes: The gluteus maximus and minumus are two extremely important muscles in terms of structural support and the application of force to either the ground or pedal. 2) Weak Hamstrings: Again, this muscle group is used in cycling but not as much during the power stroke with the exception of the knee flexor on the upstroke. Ironically, both muscle groups above are crucial in not just supporting the back but in supporting our entire body structure when we are not on the bike.

we need that chart view. working on it. by adamhansil Apr 7