How walking through a doorway increases forgetting 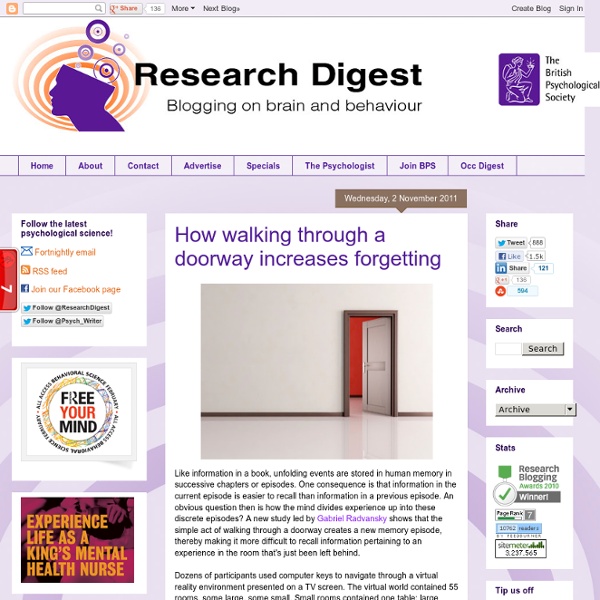 Like information in a book, unfolding events are stored in human memory in successive chapters or episodes. One consequence is that information in the current episode is easier to recall than information in a previous episode. An obvious question then is how the mind divides experience up into these discrete episodes? A new study led by Gabriel Radvansky shows that the simple act of walking through a doorway creates a new memory episode, thereby making it more difficult to recall information pertaining to an experience in the room that's just been left behind. Dozens of participants used computer keys to navigate through a virtual reality environment presented on a TV screen. The virtual world contained 55 rooms, some large, some small. The key finding is that memory performance was poorer after travelling through an open doorway, compared with covering the same distance within the same room. But what if this result was only found because of the simplistic virtual reality environment? Related:  Psycho

Are You a “Pre-crastinator”? The views expressed are those of the author and are not necessarily those of Scientific American. Each of us, at times, can be a procrastinator, putting off something that is hard to do or that we don’t want to do. But three researchers at Pennsylvania State University think we humans may also be precrastinators—hurrying to get something done so we can cross it off our mental to-do list, even if the rush ends up being wasteful. The researchers also claim to have coined the term “precrastination.” Psychology professor David Rosenbaum and his two collaborators reached their conclusion after asking 257 students to complete a bucket challenge. Almost all of the students chose the bucket that was closer to them—meaning, farther from the end of the alley, requiring more physical work to complete the task. Rosenbaum actually designed the experiment to investigate aspects of walking and reaching; he is an expert in human perception and motor control.

Perfectionism, Procrastination, and Distress | Psychology Today Excessive concerns about making mistakes, pernicious self-doubt, harsh self-criticism, impossibly high standards or expectations for performance, a strong and chronic tendency to evaluate one’s performance as not measuring up to levels expected by oneself or others - these are features of maladaptive perfectionism that predict psychological distress. In a longitudinal study across the semester of a sample of predominantly female undergraduate students, Kenneth Rice, Clarissa Richardson, and Dustin Clark from the University of Florida examined the relations between measures of perfectionism, procrastination, and psychological distress. They explored a number of different potential models that might explain the relation among these variables, with a particular emphasis on a model where perfectionism leads to more procrastination that increases psychological distress. Interestingly, this isn’t what they found. Perfectionism and Procrastination Results Implications The authors write, References

The Effects Of Emotional Abuse & How To Heal Them - mindbodygreen Insomnia, appetite changes, constant fear, a sense of doom, and hopelessness: self-destruct mode. This is your body saying "no more." Your patchwork — the above four solutions — aren't working anymore, and your body is going to torture your mind until you surrender to the only permanent solution: love. You should seek professional therapy for anxiety and depression, but I would highly recommend that all emotional abuse survivors approach therapy from the perspective of love rather than constant analysis of your undesirable behaviors. After emotional abuse, there are so many lies obstructing the heart: not enough, inadequate, worthless, bad, broken, replaceable, unlovable, my fault. Related reads:

Half of Your Friends Aren’t Actually Your Friend -- Science of Us Here’s a fun exercise: Take a minute and count up all your friends. Not just the close ones, or the ones you’ve seen recently — I mean every single person on this Earth that you consider a pal. Got a number in your mind? Good. Now cut it in half. Okay, yes, “fun” may have been a bit of a reach there. The study authors gave a survey to 84 college students in the same class, asking each one to rate every other person in the study on a scale of zero (“I do not know this person”) to five (“One of my best friends”), with three as the minimum score needed to qualify for friendship. Overall, the researchers documented 1,353 cases of friendship, meaning instances where one person rated another as a three or higher. Which makes sense — you probably wouldn’t call someone a friend, after all, unless you thought that definition was mutual.

On Smell Smell is one of our primary and most immediate ways of understanding and interpreting the world and everything in it. We naturally categorise things into good and bad smells, and gravitate towards the former. Billion dollar industries exist around masking smells; making our environments and bodies smell better and less human. We often intuitively talk about smell as a shortcut to memory — with a certain, distinct scent being enough to remind us of of a certain time or place, often with great emotional intensity. Yet throughout history, smell has oftentimes been considered a lower sense, through which we can only access a baser reality. Plato renounced smell. Philosopher G.W. When the Black Death swept through Europe in the 14th century, understanding of the modern germ theory of disease eluded doctors. Enlightenment thinkers dismissed smell as irrational and unverifiable. But not all throughout history have rejected smell as low and base. “Not just smells.

Introverted Feeling feeling is particularly vulnerable in regard to such experiences. This vulnerability — which may become as intense at that of the sensitive plant — is one of the most characteristic peculiarities of this type. Just as with the introvert of thinking-type, we find here, too, a marked contrast between inner security on the one hand, and uncertainty in external behavior on the other. But whereas with the introverted thinker this opposition gives rise to thought concerning the problems of life, with the individual of feeling-type it leads to deep feeling, and to a strange mixture of inner tenderness and passionate conviction. These people are absolutely certain as to the soundness of their ideals, but this is accompanied by a helpless feeling that it will never be possible to realize them in this world. They conceal their sensitiveness behind a mask, which may be childish or simple, or again conventional, remote, or it may be friendly. This feeling-type is particularly found among women.

Extraverted Intuition The vision of the extraverted intuitive individual is directed chiefly on to relationships and circumstances in the external world, which are suddenly seen in a certain context, without his being able to work out how he came to it. This knowledge, and the spontaneous activities in which it is expressed, often prove to be absolutely correct and to the point, when checked by later experience. The extraverted intuitive is also readily able to grasp the views of others. The extraverted intuitive is in many respects the opposite of the introverted instinctive person. Owing to this excessive spontaneity in their nature, extraverted intuitives find it extremely difficult to bind themselves to keep rules or appointments. With intuitive people judgment takes the form of a strong, momentary conviction, which they often express so persuasively that others are influenced by it. Reason is in intuitive people subordinate to spontaneous inspiration.

This Nifty Infographic Is a Great Introduction to Neuroplasticity and Cognitive Therapy It's startling to think about how we've got a spaceship billions of miles away rendezvousing with Pluto, yet here on Earth there are major aspects of our own anatomy that we're almost completely ignorant about. We've climbed Everest, sent men to the moon, and invented the Internet — but we still don't know how our brains work. The positive outlook is that many health, science, and research specialists believe we're on the precipice of some major neuroscientific breakthroughs. One example of a recent discovery with major implications is our further understanding of neuroplasticity. Simply put, we used to think our brain was what it was — unchangeable, unalterable. We were stuck with what nature gave us. Below, broken up into two parts, is a terrific infographic detailing the essence of what we know about neuroplasticity and how it works. Want a high-res, unedited version of the image above? (h/t @DaniMansfield) Want to learn more about neuroplasticity?

11 Signs That Someone You Know Is Hiding Depression – Learning Mind Depression is a monster, plain and simple, and there is no other way to look at this debilitating disease. Most people think that depression is easily recognizable too, but that’s not always the case. Some people move through this life wearing a mask to hide their depression. I love using that analogy because I have worn many masks to conceal my depression – the mask of fake cheer, the mask of anger and the mask of comfortable numbness or complacency. I bet you wonder why we do this, why we choose to hide our true feelings. Well, there are many reasons, but the main reason is that others usually fail to understand us. If you feel that someone you love is hiding depression, then here are the indicators. 1. Those who are hiding depression may seem happy, even overly ecstatic at times. 2. We victims of depression are great at fabricating things to hide what’s really going on in our life. 3. Those who suffer from depression have a subtle way of crying for help. 4. 5. 6. 7. 8. 9. 10. 11.