This is (not) psychology 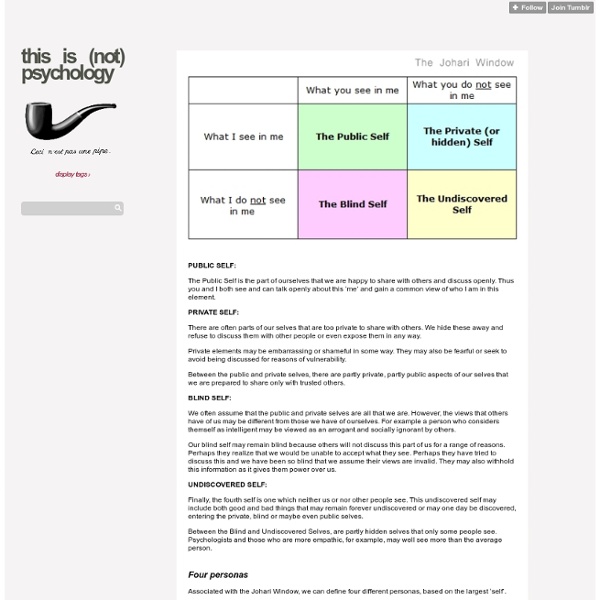 Color Psychology by David Johnson Like death and taxes, there is no escaping color. It is ubiquitous. Yet what does it all mean? Why are people more relaxed in green rooms? Why do weightlifters do their best in blue gyms? Colors often have different meanings in various cultures. Black Black is the color of authority and power. White Brides wear white to symbolize innocence and purity. Red The most emotionally intense color, red stimulates a faster heartbeat and breathing. The most romantic color, pink, is more tranquilizing. Blue The color of the sky and the ocean, blue is one of the most popular colors. Green Currently the most popular decorating color, green symbolizes nature. Yellow Cheerful sunny yellow is an attention getter. Purple The color of royalty, purple connotes luxury, wealth, and sophistication. Brown Solid, reliable brown is the color of earth and is abundant in nature. Colors of the Flag In the U.S. flag, white stands for purity and innocence. Food for Thought

5 Psychological Experiments That Prove Humanity is Doomed Cracked.com's new book is now on sale. What follows is one of 22 classic articles that appear in the book, along with 18 new articles that you can't read anywhere else. Psychologists know you have to be careful when you go poking around the human mind because you're never sure what you'll find there. A number of psychological experiments over the years have yielded terrifying conclusions about the subjects. Oh, we're not talking about the occasional psychopath who turns up. The Asch Conformity Experiment (1953) The Setup: Solomon Asch wanted to run a series of studies that would document the power of conformity, for the purpose of depressing everyone who would ever read the results. Subjects were told that they would be taking part in a vision test, along with a handful of people. The Result: Questions the subjects were asked were like the puzzle shown here: All they had to do was say which line on the right matched the one on the left. ... and make sure you conform to it perfectly. C.

Ten Psychology Studies from 2009 Worth Knowing About - David DiSalvo - Brainspin Image by AFP/Getty Images via Daylife Several great psychology and neuroscience studies were published in 2009. Below I’ve chosen 10 that I think are among the most noteworthy, not just because they’re interesting, but useful as well. 1. 2. 3. 4. 5. 6. 7. 8. 9. 10. Does the comfort of conformity ease thoughts of death? - life - 25 February 2011 AS THE light at the end of the tunnel approaches, the need to belong to a group and be near loved ones may be among your final thoughts. So say Markus Quirin and his colleagues at the University of Osnabrück in Germany. The team prompted thoughts of death in 17 young men with an average age of 23 by asking them whether they agreed or disagreed with a series of statements such as "I am afraid of dying a painful death". To compare the brain activity associated with thoughts of death with that coupled to another unpleasant experience, the team also prompted thoughts of dental pain using statements like "I panic when I am sitting in the dentist's waiting room". Quirin's team found that thoughts of death, but not of dental pain, triggered heightened activity in brain regions such as the right amygdala, which is associated with fear and anxiety. Quirin thinks the work of German philosopher Martin Heidegger could explain the unexpected result. New Scientist Not just a website! Promoted Stories

Hedgehog's dilemma Both Arthur Schopenhauer and Sigmund Freud have used this situation to describe what they feel is the state of individual in relation to others in society. The hedgehog's dilemma suggests that despite goodwill, human intimacy cannot occur without substantial mutual harm, and what results is cautious behavior and weak relationships. With the hedgehog's dilemma, one is recommended to use moderation in affairs with others both because of self-interest, as well as out of consideration for others. The hedgehog's dilemma is used to explain introversion and isolationism. Schopenhauer[edit] The concept originates in the following parable from the German philosopher Arthur Schopenhauer's Parerga und Paralipomena, Volume II, Chapter XXXI, Section 396:[1] A number of porcupines huddled together for warmth on a cold day in winter; but, as they began to prick one another with their quills, they were obliged to disperse. Freud[edit] Social psychological research[edit] References[edit]

Madonna–whore complex In sexual politics the view of women as either Madonnas or whores limits women's sexual expression, offering two mutually exclusive ways to construct a sexual identity.[4] The term is also used popularly, often with subtly different meanings. Causes[edit] Freud argued that the Madonna–whore complex is caused by oedipal castration fears which arise when a man experiences the affection he once felt for his mother with women he now sexually desires. In order to manage this anxiety, the man categorizes women into two groups: women he can admire and women he finds sexually attractive. Whereas the man loves women in the former category, he despises and devalues the latter group.[5] Psychoanalyst Richard Tuch suggests that Freud offered at least one alternative explanation for the Madonna–whore complex: According to Freudian psychology, this complex often develops when the sufferer is raised by a cold and distant mother. In popular culture[edit] See also[edit] References[edit] Notes Literature John A.

Stockholm syndrome Stockholm syndrome, or capture-bonding, is a psychological phenomenon in which hostages express empathy and sympathy and have positive feelings toward their captors, sometimes to the point of defending and identifying with the captors. These feelings are generally considered irrational in light of the danger or risk endured by the victims, who essentially mistake a lack of abuse from their captors for an act of kindness.[1][2] The FBI's Hostage Barricade Database System shows that roughly 8 percent of victims show evidence of Stockholm syndrome.[3] Stockholm syndrome can be seen as a form of traumatic bonding, which does not necessarily require a hostage scenario, but which describes "strong emotional ties that develop between two persons where one person intermittently harasses, beats, threatens, abuses, or intimidates the other History[edit] Stockholm syndrome is named after the Norrmalmstorg robbery of Kreditbanken at Norrmalmstorg in Stockholm, Sweden. Similarly named syndromes[edit]

5 Ways Stores Use Science to Trick You Into Buying Crap A big chunk of the world economy runs on human weakness. Peer pressure, vanity, insecurity, the fact that we just cannot resist the sight of melted cheese -- all of these will make us fork over our cash. And really, we're fine with that. But what you may not know is that there are some other, much weirder scientific principles that factor into what you buy. You Move in Predictable Patterns You step in the front door of your nearest chain grocery store. This is the only sheep-based image we'll use this article. This is because, after years of analysis of how humans move in a store, they've found that we're as easy to predict as animal migrations. Grocery stores are laid out to lead you around a set path you didn't even know you were following. "Boy, those fresh carrots sure did help me forget that everything in this aisle has been dead for weeks." And sweet lady Boxed Wine. Remember, the goal is to keep you in the store as long as possible, and to make you pass as many shelves as possible.

Concert pianist: how to perform under pressure BPS Research Digest