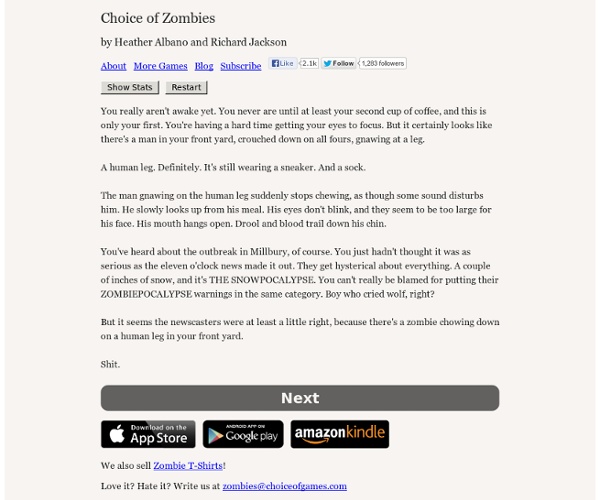 You really aren't awake yet. You never are until at least your second cup of coffee, and this is only your first. You're having a hard time getting your eyes to focus. But it certainly looks like there's a man in your front yard, crouched down on all fours, gnawing at a leg. A human leg. Definitely. The man gnawing on the human leg suddenly stops chewing, as though some sound disturbs him. You've heard about the outbreak in Millbury, of course. But it seems the newscasters were at least a little right, because there's a zombie chowing down on a human leg in your front yard. Shit.

10 Famous Films That Surprisingly Fail The Bechdel Test All this week, Film School Rejects presents a daily dose of our favorite articles from the archive. Originally published in September 2011, Ashe Cantrell applies the simple, ever-relevant Bechdel Test to a number of high profile movies… The Bechdel Test, if you’re not familiar with it, is a benchmark for movies developed by Alison Bechdel in 1985. For a movie to pass The Bechdel Test, it must contain just one thing - a scene in which two or more named female characters have a conversation (that is, back and forth dialogue) about anything at all besides men. Anything, even if it’s something stereotypically feminine, like shopping or shoes.

Learn Criss Angel Style Magic Tricks "Awesome, you're a great illusionist!" Criss Angel is a great entertainer, performing many stunning illusions. Here are some great Criss Angel style coin tricks that look like real magic! THE EFFECT: You place any coin on the palm of your open hand, giving a magical snap, it vanishes into thin air! A dream treehouse · Sheepy Me I've always wanted a treehouse when I was a child but living in a city made it a little difficult. Instead, we would built forts, tents or just crawl under the bed to play. It's weird right now but back then we really loved having those hideouts where nobody could find us. We could stay there for as long as we wanted. Telling horror stories and feeling like these were the safest places to be.

30 game scripts you can write in PHP, Part 1: Creating 10 fundamental scripts Getting started As both a game master/storyteller and a developer, I frequently find myself writing little utilities and scripts to help me when running, planning, and playing games. Sometimes I need a quick idea. Other times, I just need a whole pile of names for Non-Player Characters (NPCs). Occasionally, I need to geek out on numbers, work out some odds, or integrate some word puzzles into a game. A Video Game Timeline (1967-Present) Embed the image below on your site Presented by <a href=" Education</a><br><a href=" src=" alt="Video Game Timeline" width="500" height="200" border="0" /></a><br /> Created by Online Education In the history of consumer products the history of video games is a relatively short one. But it has had a significant impact on how people play games especially X generation and millennial children. Nowadays many people who are interested in video games aren’t children at all and the fastest growing segment has actually been adults.

PICTURE JOKES » Just some advice :) First post, 3 years in the lurking. This is me and my Papa (grandpa) He went on a trip last Friday… … and returned on Sunday to find his home of 50 years burnt to the ground. How the Necronomicon Works" Weird fiction author H.P. Lovecraft created a mythology that includes bizarre monsters, troubled communities, insane scholars and a library of books filled with forbidden lore. Of all the books detailing this mythology that Lovecraft mentions in his fiction, one in particular captures the imagination more than any other: the "Necronomicon." According to Lovecraft, it's a tome filled with secrets and rituals that can drive a reader to the brink of insanity. In reality, the "Necronomicon" doesn't exist, though more than a half dozen books with the title "Necronomicon" are available at bookstores. The book is yet another aspect of Lovecraft's fiction, invented as a mere plot device.

Einstein for Everyone Einstein for Everyone Nullarbor Press 2007revisions 2008, 2010, 2011, 2012, 2013 Copyright 2007, 2008, 2010, 2011, 2012, 2013 John D. Norton Published by Nullarbor Press, 500 Fifth Avenue, Pittsburgh, Pennsylvania 15260 with offices in Liberty Ave., Pittsburgh, Pennsylvania, 15222 All Rights Reserved John D. The Shield of Superman: The Evolution of an Icon If you want to dress up like Superman, it is important to understand which Superman your going to be. The Shield of Superman: The Evolution of an Icon infographic from HalloweenCostumes.com provides visuals and a brief synopsis of each Superman logo in the comics and pop culture. It’s a bird…It’s a plane…It’s Superman! Well, not Superman himself, but it IS a super awesome Superman infographic.2013 is THE year for everyone’s favorite Man of Steel. Between it being the hero’s 75th anniversary, and Man of Steel hitting the silver screen on June 14th, we’re bursting with red and blue excitement!

19 Outstanding Words You Should Be Working Into Conversation There are some of our favorite words that appeared in mental_floss stories in 2011. Some are foreign words. Others come from medical dictionaries. And there's a surprising amount of hobo slang. Have fun working these into conversation this holiday season! Gene Lee / Shutterstock.com

15 Bogeymen From Around The World Creepy The bogeyman is a legendary ghost-like monster. The bogeyman has no specific appearance and conceptions of the monster can vary drastically even from household to household within the same community; in many cases he simply has no set appearance in the mind of a child, but is just an amorphous embodiment of terror. This list looks at 15 bogeymen from around the world.

Gadget of the Week BoostTurbine2000 from Etón is a durable back-up battery with a hand turbine power generator that provides power for every day or emergency use; you can pretty much charge your mobile devices anywhere, at any time. In one minute the hand turbine power generator can produce enough power for a 30-second call or a few critical texts. When fully charged, BoostTurbine2000 fully charges most smartphones. With recent disaster like Hurricane Sandy we are reminded of how useless our devices are without access to electricity, for days and weeks. How To Draw Hands Tutorials So everybody knows that the hands and the fingers are one of the hardest things to draw. So here is a personal collection of different hand references, hope to enjoy it and never stop practice. Hogarth hand poses from Iron Giant (middle of page) Mickey Mouse Hand Model Sheet by Les Clark ca. 1932