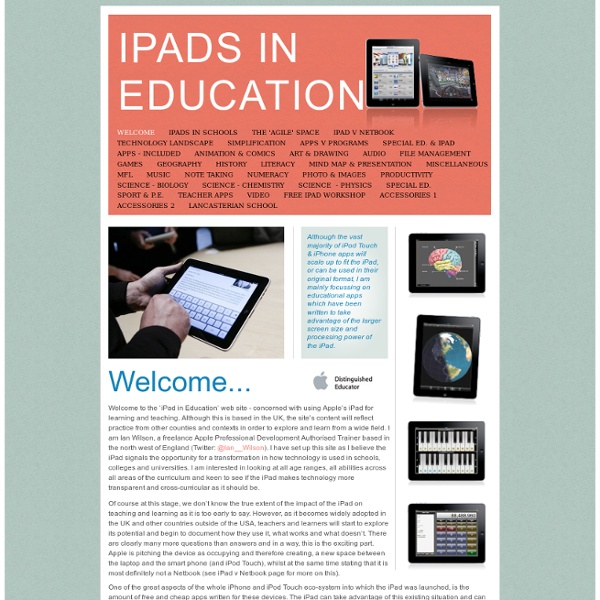 The Complete List of iPad Tips, Tricks, and Tutorials The Apple iPad is an amazing tablet, and to help you get the most out of it, we’ve put together a comprehensive list of every tip, trick, and tutorial for you. Read on for more. Note: This article was originally published earlier this year, but we’ve updated it with a real lot more content since then, so we’re republishing it for you.

iPod It’s hard to describe to people all of the magic that happens at Anastasis on a daily basis. It really does feel like something special, a magical quality of falling down the rabbit hole into another world where school is fun and challenging and wonderful. The learning that happens here is very organic, it lacks a formulaic approach. So when people ask us how they can do what we do, it isn’t a simple answer. 5 iPad Apps Every Teacher Should Have Just to wrap up our week of apps for teachers here are some favourites that will make your iPad a little more productive in the classroom. Enjoy iWork Until Microsoft release office for the iPad iWork offers the MS Works equivalent of a productivity suite for the iPad. Pages, Numbers and Keynote make for a fairly impressive productivity suite for $30, or $10 each.

Teaching Large Classes with an iPad » To this day I remain a big fan of the overhead projector. I truly believe it was more effective a tool for teaching than the projected Powerpoint slides will ever be. I stood facing the students, watching their expressions, which I could see since the lights were sufficiently bright. 10 Excellent iPad Applications for Teachers With the iPad2 on the launching pad, it’s a great time to share this list of useful iPad apps for teachers from guest writer Paula Dierkens. There’s no doubt that the iPad is an excellent device, and if you own this gadget, it makes sense to pick up the applications best suited to your lifestyle and profession. So if you’re a teacher, here are ten great iPad apps that you must try out: [Note to readers of this article! I conducted a survey in March of 2012 to update this list of iPad apps that educators like to use in their professional roles, so it is based on actual teacher input. The results are available in this post.

50 really useful iPad 2 tips and tricks An absolute gem of an article by John Brandon and Graham Barlow from MacLife on 30th March over at TechRadar. This is going to become my iPad manual from here on in. Customised iPads for all Thoughts on the iPad2 in Teaching By Shelly Blake-Plock Picked up my own iPad2 about three weeks ago and, as an experiment, I have set my laptop aside and have used nothing but the Apple in the classroom ever since. And I have found that there is nothing that I do in my normal activities as a teacher that I have done with a laptop or a tablet PC that I can not do with the iPad2.

Blooms and iPad Applications I just got tweeted a nice diagram showing iPad applications against different levels of Bloom’s revised taxonomy. Its a good and well considered diagram and I like it. Some applications there that I haven’t seen yet and I will have to look up. Collaborative Whiteboard Apps for the Classroom Interactive and collaborative - Whiteboards are a great way for teachers to explain concepts to their students. With the ability of some iPad apps to record, you ensure that students who did not develop understanding of the concept the first time have the opportunity to watch and listen again and again. Working in small groups or brainstorming as a class, collaborative whiteboards are a great way to share ideas. Work in the same room, on the same network or even from different parts of the country.

Measuring the iPad's Potential for Education Analysis Measuring the iPad's Potential for Education Educators and analysts weigh in on how the iPad could infiltrate the hallways of K-12 schools nationwide By Bridget McCrea01/27/10 Thanks to the fact that Pinellas County high schools release early on Wednesdays, Catherine Nothstein didn't even have to skip school to watch the live feed of the Apple iPad announcement on her home laptop. Glued to the screen, this ninth grader from Dunedin High School in Dunedin, FL, was among the millions who got a first glimpse of the revolutionary new gadget at shortly after 10 a.m. 10 Revolutionary iPad Apps to Help Autistic Children Teachers and doctors are using iPads as a tool to reach out to children with Autism or Asperger Syndrome and the results are remarkably great. Autistic children are showing tremendous improvement after playing fun-filled exercises on iPad which is less stressful and more fun for both the teachers and the students. Below is the list of 10 best iPad applications to give Autism a voice. Photo Credit: Kelly Nikolaisen Those who don’t know, Autism is a lifelong disability that affects the way a person communicates and relates to other people and the world around them. Those affected typically display major impairments in three areas: social interaction, communication and behavior (restricted interests and repetitive behaviors). 1 in 160 children have autism in some form, making it twice as common as cystic fibrosis, cerebral palsy, childhood deafness or blindness and ten times more common than childhood leukemia.

Top 200 best iPad apps 2011 If you've got yourself an iPad Air or new iPad mini, you'll want to start downloading the best iPad apps straight away. And if you already have an iPad 4 or older iPad, you might want to update it with some new apps. It's the apps that really set iOS apart from other platforms - there are far more apps available on the App Store for the iPad than any other tablet. So which which ones are worth your cash?

Great to find some resources. 25 iPads will be transforming my classroom this fall : ) by lindseyfuller May 31

Great to be a pearl in this initiative. by acalderon May 18

Related:  IPads • Tablettes et education • iPad reserach • Categories and apps • iPad a scuola • mcrau • dmahinda • iPads in the Classroom • IPAD information • Ipad • iPads in Schools • scafferty • iPads SCPS2013 • phoenix72
Related:  iPad Recommended Educational App Lists | Scoop.it   -  Projecting Your iPad Wirelessly - Without an Apple TV - iPads in Education   -  Educational Technology Guy: Real World Math - ideas for using Google Earth in math class   -  Blogging About The Web 2.0 Connected Classroom: Tools And Resources For Creating Infographics   -  5 Flash Players for iPad - TechShout   -  Six Examples of iPad Integration in the 1:1 Classroom | Edutopia   -  Top 10 Things NOT to do in a 1:1 iPad Initiative   -  How To Setup Parental Controls (Restrictions) on the iPad | iPad Insight   -  Bloom's Taxonomy for The iPad ~ Educational Technology and Mobile Learning   -  iDevices in the Special Education Classroom   -  Apps for Dyslexia and Learning Disabilities   -  Naace: The iPad as a Tool For Education - a case study   -  How to Roll Out a 1:1 iPad Program   -  The Top Educational iPad Apps Every Teacher and Student should Know about ( 100+)   -  What We Learned: A 1:1 iPad Reflection   -  Mrs.Wideen's Blog   -  What The iPad Has Done To Education -   -  15 Offline Activities with an iPad   -  iPads in schools! They just play games! |  IPAD 4 SCHOOLS   -  The Answer Pad – An ideal tool for engaging students in a flipped or blended learning classroom.   -  23 best iPad art apps for painting and sketching   -  inClass on the App Store on iTunes   -  Pair Activities With the iPad   -  The Single Most Important Factor for iPad Success in Schools — Learning in Hand   -  Virtual Manipulatives! on the App Store   -  Aurasma on the App Store   -  A list of All The Best iPad Apps Teachers Need   -  15 iPad Skills Every Teacher and Student should Have   -  Free Internet Safety Tutorial at GCFLearnFree   -  Adobe Reader on the App Store on iTunes   -  MindMeister (mind mapping) on the App Store   -  One iPad in the classroom   -  Creating on iPads   -  iPad uses in the classroom - Google Présentations   -  Teaching with Aurasma - YouTube   -  padagogy-wheel.jpg (JPEG Image, 1829 × 1829 pixels) - Scaled (54%)