The iPad as a Tool For Education - a case study 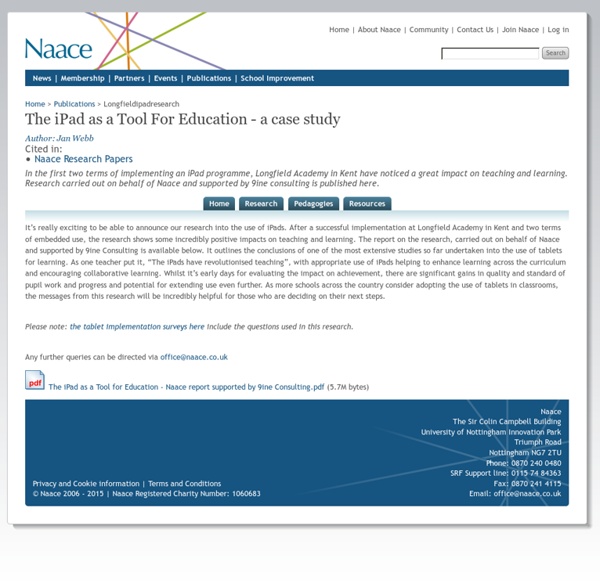 5 Critical Mistakes Schools Make With iPads (And How To Correct Them) Over the last few years K-12 schools and districts across the country have been investing heavily in iPads for classroom use. EdTechTeacher has been leading iPad professional development at many of these schools and we’ve seen firsthand how they approach iPad integration. While we’ve witnessed many effective approaches to incorporating iPads successfully in the classroom, we’re struck by the common mistakes many schools are making with iPads, mistakes that are in some cases crippling the success of these initiatives. We’re sharing these common challenges with you, so your school doesn’t have to make them. 1) Focusing on content apps The most common mistake teachers make with iPads is focusing on subject-specific apps. It simply didn’t occur to him use the VoiceThread app to record his students speaking Latin, or perhaps create a collaborative discussion of Cicero. And we don’t introduce a single subject app. 2) Lack of Teacher Preparation in Classroom Management of iPads It doesn’t.

A Small Collection of Studies of iPad Use in Education This week I got the itch to go beyond anecdotal stories about iPads in the classroom and look for some more substantial research and writing on the topic. Below are some of the reports that I’ve been reading through this week. The Department of Education and Early Childhood Development for Victoria, Australia iPads for Learning – In Their Hands field trial studied the use of iPads in nine schools. One of the observations to note here is that greater success was reported at primary and special schools than in secondary schools. The iPad as a Tool for Education is a study based on iPad use at Longfield Academy, Kent, England . Reading With iPads – The Difference Makes a Difference studied the impact on the reading comprehension, knowledge of content, and analysis skills of boys aged 11 to 13 who read using iPads. The Impact of the iPad and iPhone on Education was published in 2010 and is speculative in nature as the students surveyed had not yet been given iPads.

The SAMR Model Stephanie talked about the Apple Classroom of Tomorrow (ACOT) study from 1985-97, which looked at moving from instruction to construction of knowledge and measured teacher's comfort with technology. Now, however, the focus shouldn't be on the technology but on what you do with the technology - and what it can do for you. Stephanie showed a graphic of the technology use continuum, moving from substitution to redefinition: Substitution involves doing the same thing as you would do without the technology without any modification of the assignment, for example typing out the work using a word processor rather than handwriting. Augmentation - involves some functional improvement but is still a direct tool substitute - again the assignment is not changed, but perhaps some of the built in tools such as the thesaurus, word count, spell check etc might be used. These first 2 levels lead to ENHANCEMENT These 2 levels lead to TRANSFORMATION Photo Credit: Black Forest Gateau by Xynt4x

8 Studies Show iPads in the Classroom Improve Education 8 Studies Show iPads in the Classroom Improve Education Posted by Ashley Wainwright on Mon, Feb 18, 2013 @ 09:26 AM Since their release in April of 2010, Apple’s iPads have taken the US by storm. iPads have swept through almost every industry, especially education. Apple is pushing for iPad use in education, and several schools across the US have taken up the charge. There have been many interesting studies done about iPads in the classroom and the effects on both students and teachers. A research study, conducted in Auburn, Maine showed that Kindergartner students using iPads scored much higher on literacy tests than students that didn’t use the device. According to Open Colleges, 81% of U.S teachers think tablets can enrich classroom learning, and 86% of students believe that tablets can help them to study more efficiently. iPad technology in the classroom can be a powerful tool for learning and comprehension.

7 Key Findings for Successful Education Technology Integrations Continuing with the theme of measurable successes in education technology implementations that we’ve explored in a number of articles over the last few months, today we take a look at Project Red. Project RED conducted a national study of education technology focused on student achievement and financial implications. The coalition of three research organizations surveyed and studied nearly 1,000 schools and uncovered a replicable design for successfully introducing technology into the classroom, improving student performance, and yielding cost benefits. This exciting research endeavor developed 11 “success measures” and 22 independent measures and incorporated these into a survey tool that was central to the project’s effort to identify and prioritize the factors that make some U.S. K-12 technology implementations perform dramatically better than others. Project Red’s research produced 7 key findings, summarized briefly below (check out the complete findings for further details). 1. 2.

Lateline - 17/09/2012: Parents charged hundreds of dollars for free Apps Australian Broadcasting Corporation Broadcast: 17/09/2012 Reporter: Suzanne Smith Parents are receiving credit card bills for many hundreds of dollars for games which have been downloaded for free and played online by their children. Transcript EMMA ALBERICI, PRESENTER: There's a call tonight for urgent regulation of so-called free apps that end up costing parents hundreds of dollars on their iTunes accounts. It's known as an in app purchase, introduced by Apple two years ago. The Coalition's chief pollster and strategist, Mark Textor, has told Lateline parents should refuse to pay the iTunes bills because children are effectively being taught how to gamble. Suzanne Smith has this exclusive report. SUZANNE SMITH, REPORTER: Sylvie is your typical nine-year-old girl. SYLVIE: I'd say be careful, you never know what's going to happen and you never know how much money you’re going to spend. ANN BUCHNER, SYLVIE'S MOTHER: Over a three-day period, Sylvie had managed to rack up a bill of almost $600.

The iPad Toolkit for Learning? | dedwards.me It is interesting to reflect how this simplification of iPad key tools has changed in a relatively short space of time. iWork suite aside, you could purchase the above apps for less than the cost of a textbook and have a model that could enhance learning with the right application. For those educators who are using iPads in the classroom, the suggestions above will be nothing new. The hope is that other educators will not feel overwhelmed by the diagram and actually view a number of core apps as manageable for their own learning curve. It must be said that there are a number of applications that I could happily add to the diagram that would be useful for the toolkit. For example, Showbie (a way of collecting, assessing and handing back student work) would certainly meet the requirements of many iPad learning environments. You will notice that Google Drive and Explain Everything are an integral part of the learning process. -with thanks to Greg Hughes @deepexperience1 Like this:

The Single Most Important Factor for iPad Success in Schools When you think of iPads in schools, you probably think of a cart that's wheeled into a classroom. Youngsters cheer at the arrival of the cart. Devices are passed out, used for a lesson, and then returned to the cart. The cart is then whisked away to another classroom where the same thing happens. Having a cart of devices puts the adults in charge of the technology. The Technology Enhanced Learning Research Group, lead by Kevin Burden from the University of Hull, investigated the use of iPads at eight different schools in Scotland. The researchers found that "personal 'ownership' of the device is seen as the single most important factor for successful use of this technology." The study also found that teachers using iPads changed their approach to teaching. Not surprisingly, teachers and students want to continue to have access to iPads and are convinced that their use has changed learning for the better. In search of more research about iPads in education? schooltechnology.org

The iPad and Parental Engagement in Education Parents have a very different perspective. Whilst educators wax lyrical about the potential of the iPad for learning, there are concerns from parents about its impact on their child. Or so we thought. All parents of iPad trial students were asked to complete a questionnaire, attend a focus group meeting and email any further thoughts to inform the decision making progress for future iPad use. A great deal of time was taken by these parents as they were keen to convey their thoughts to inform the research process and we are very grateful for all their efforts. Below are direct responses to questions from the focus group where parents were encouraged to discuss with each other the various advantages and disadvantages of the iPad for learning. Have you noticed any change in the way your child approaches learning?. As suspected the increased motivation and collaboration we have witnessed from students has also been observed at home. Like this: Like Loading...

BYOT Information The York County School Division is recognized as an international leader in the effective practice of BYOT, Bring Your Own Technology, which encourages students to bring their personal technology tools to school for learning. YCSD was named a 2012-2013 Microsoft Innovative Pathfinder School District as a result of the division’s BYOT initiative. As students utilize their personal technology devices in school, they can learn new ways to use them for collaborating and interacting with their teachers and each other to research information, solve complex problems, create original products, and publish their work. BYOT was first introduced to secondary students at the start of the 2011-12 school year. General Information Get The Maximum out of Evernote with These Awesome Tutorials Evernote is one of the apps I use on everyday basis. I have already featured it in my "top 10 web tools as a teacher ". I know there are several other tools that can do the same and I have reviewed some of them here in Educational Technology and Mobile Learning, but the powerful features Evernote exhibits together with its ease of use make out of this app one of the must have for every teacher and student. I use Evernote for a wide variety of reasons most important of which is to organize my digital life and keep track of my projects. I also use it to jot down notes around web content I read, or to clip blog posts that interest me. There are also several third party tools I use with my Evernote and which enable me to get the maximum out of this application. Today I am sharing with you 5 of the most popular video tutorials on Evernote. 1- Evernote notes 2- How to Use Evernote Notebooks 3- How to Use Evernote tags 4- How to use Evernote Search 5- How to use Evernote Clipper