How To Setup Parental Controls (Restrictions) on the iPad 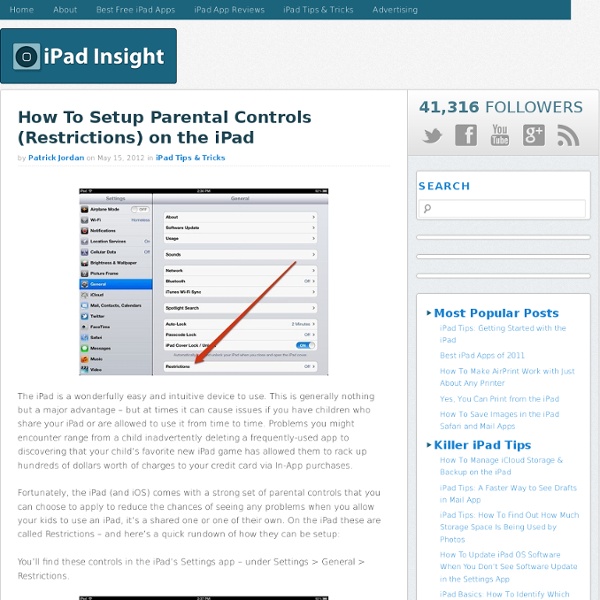 The iPad is a wonderfully easy and intuitive device to use. This is generally nothing but a major advantage – but at times it can cause issues if you have children who share your iPad or are allowed to use it from time to time. Problems you might encounter range from a child inadvertently deleting a frequently-used app to discovering that your child’s favorite new iPad game has allowed them to rack up hundreds of dollars worth of charges to your credit card via In-App purchases. Fortunately, the iPad (and iOS) comes with a strong set of parental controls that you can choose to apply to reduce the chances of seeing any problems when you allow your kids to use an iPad, it’s a shared one or one of their own. On the iPad these are called Restrictions – and here’s a quick rundown of how they can be setup: You’ll find these controls in the iPad’s Settings app – under Settings > General > Restrictions. There are four sections to the Restrictions area. Allow Allow Changes Allowed Content Game Center

Related:  iPad for Teaching & Learning • iPads in the Classroom

5 Ways to Integrate Technology Into Your Child's Education Jeff Galinovsky is regional manager for Intel’s classmate PC in North America where he focuses on expanding education products as well as building an education ecosystem. You can follow him on Twitter at @ClassmatePCDude. Most of us didn’t have today’s technology options when we were in school, so while parents realize technology has become an integral part of their child's education, they're sometimes finding it difficult to incorporate it into the learning process. transferring-worksheets-to-your-ipad Transferring worksheets to your iPad Recently I shared a photo with all of you with my daughter using printables I created on the iPad. Several people emailed me and asked how I did that. So, today I am giving a tutorial on how to do that. By putting worksheets on your iPad, you not only save tons of ink and paper.. But you also make worksheets a bit more fun.

40+ Super Secret iPad Features and Shortcuts We all want to get the very best out of our devices! Who doesn’t love finding out a new trick or shortcut? This roundup aims to enlighten those new to the iPad, and guide old hands to a few new tricks – the heading might be laced with hyperbole, but you’re going to have a look anyway… For those of you who are super-confident about your iPad knowledge, I’d like to propose a challenge. Go through and see how many features and shortcuts you didn’t know about, leave a comment with the number at the bottom of the post – and be honest!

How To Connect An iPad To A Smartboard It’s really simple–so simple that you’re going to feel silly for not having already known this–and if you tweet this out to a colleague without checking out the stunning simplicity of it all, you’re going to feel crunchy (remember that term?) later when you realize it wasn’t quite the revelation you’d thought it might be. Context If you’ve only got one iPad, or are trying to guide the entire class through an activity, the classroom projector can act as a modeling tool for students to follow along. The Must-Have App Review Rubric Added by Jeff Dunn on 2011-11-22 So you just downloaded a few educational apps that you think might be useful in your classroom. How do you accurately compare and contrast them? Thanks to a new app review rubric from by eMobilize , it’s easier than ever to understand just how useful an app may be in the classroom.

Projecting Your iPad Wirelessly - Without an Apple TV Important update: May 6, 2012 - Mirror to your Windows PC as well Shortly after the release of Relection a second mirroring solution called AirPlay was released - available at Reflection and Airplay both allow mirroring of an iOS device to a Mac. Many site members had asked about a solution that would allow mirroring to a Windows PC. My day with Siri I admit it: I love Siri. It helps that I work from home, so I can talk to my phone without inhibitions. It doesn't hurt that I generally crave pseudohuman contact. But the real reason is simply that I find Siri so useful. The Teacher's Guide To The One iPad Classroom Today, I’m going to tell you a fairy tale: Once upon a time, my mother in law (a third grade teacher) was in her classroom at school when her principal walked in and gave her an iPad for her class to use. Well, technically it was supposed to be for the entire third grade to share, but that’s almost beside the point. After some initial excitement, she discussed how the entire third grade was supposed to share a single iPad with her fellow third grade teachers, and the iPad was promptly banished into a drawer, never to see the light of day again. The end. Wait, should I have warned you that the fairy tale didn’t have a happy ending?

Middle School iPad Apps Create and publish your own wikis and blogs. Use these web services to communicate and collaborate with your friends and coworkers. It's easy to edit this page and create new wikis. iPad Apps that work with Smartboards The iPad looks amazing when projected onto a large screen. The students in a 1 to 1 iPad classroom gets to see the apps at work. Have a look at the list below to see if any of these might be useful in your classroom.

Related:
Related:  iPad for Teaching & Learning   -  iPads in the Classroom   -  iPad Recommended Educational App Lists | Scoop.it   -  iPad Multimedia Tools   -  Patterns: Learning, Thinking, Creating « The Window   -  Projecting Your iPad Wirelessly - Without an Apple TV - iPads in Education   -  Do I just Google that? Tools for Teaching Search Skills in the Primary Classroom « ICT for Teaching & Learning in Falkirk Primary Schools   -  Educational Technology Guy: Real World Math - ideas for using Google Earth in math class   -  Blogging About The Web 2.0 Connected Classroom: Tools And Resources For Creating Infographics   -  5 Flash Players for iPad - TechShout   -  Six Examples of iPad Integration in the 1:1 Classroom | Edutopia   -  Top 10 Things NOT to do in a 1:1 iPad Initiative   -  Bloom's Taxonomy for The iPad ~ Educational Technology and Mobile Learning   -  iDevices in the Special Education Classroom   -  Apps for Dyslexia and Learning Disabilities   -  Naace: The iPad as a Tool For Education - a case study   -  How to Roll Out a 1:1 iPad Program   -  The Top Educational iPad Apps Every Teacher and Student should Know about ( 100+)   -  What We Learned: A 1:1 iPad Reflection   -  Mrs.Wideen's Blog   -  What The iPad Has Done To Education -   -  15 Offline Activities with an iPad   -  iPads in schools! They just play games! |  IPAD 4 SCHOOLS   -  The Answer Pad – An ideal tool for engaging students in a flipped or blended learning classroom.   -  23 best iPad art apps for painting and sketching   -  inClass on the App Store on iTunes   -  Pair Activities With the iPad   -  The Single Most Important Factor for iPad Success in Schools — Learning in Hand   -  Virtual Manipulatives! on the App Store   -  Aurasma on the App Store   -  A list of All The Best iPad Apps Teachers Need   -  15 iPad Skills Every Teacher and Student should Have   -  Free Internet Safety Tutorial at GCFLearnFree   -  Adobe Reader on the App Store on iTunes   -  MindMeister (mind mapping) on the App Store   -  One iPad in the classroom   -  Creating on iPads   -  iPad uses in the classroom - Google Présentations   -  Teaching with Aurasma - YouTube   -  padagogy-wheel.jpg (JPEG Image, 1829 × 1829 pixels) - Scaled (54%)   -  Leading the Smart Video Revolution