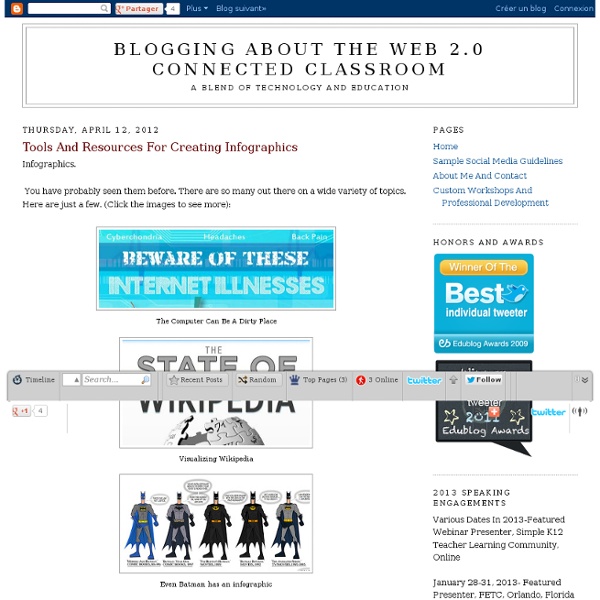 Infographics. You have probably seen them before. There are so many out there on a wide variety of topics. Here are just a few. (Click the images to see more): These really are a great way to visualize data. Here are a few of my favorite sites and tools to use when creating infographics. Wordle: Chances are this is one you have heard of. Visual.ly: It doesn't get much simpler than using Visual.ly. Stat Silk: This is a set of tools that you can download to create interactive maps and charts. Creately: Creatly is an online mindmapping program that is pretty powerful. Google Public Data Explorer: It probably goes without saying but Google has access to lots of data. Aviary Phoenix-Once you gather your images, charts and graphics, you are going to need a way to put them together. Kathy Schrock has an entire webiste dedicated to using infographics in the classroom. What other sites do you use to visualize data?

Patterns: Learning, Thinking, Creating By Kevin Washburn, on January 10th, 2012 It seems contradictory. The brain seeks and sees patterns, but when asked to find patterns, many people become uneasy. (Shelley Carson suggests that up to 80% of people find this type of thinking “uncomfortable.”1) This conundrum is the result of effort. When the brain instantly sees a pattern, it seems like a new insight has been sparked. When the brain has to search to find patterns, the rationalization begins. EdTech: 100 Tech Tools for Teachers and Students This post is #12 in DailyTekk’s famous Top 100 series which explores the best startups, gadgets, apps, websites and services in a given category. Total items listed: 104. Time to compile: 8+ hours.

The Best Resources For Creating Infographics Infographics are visual representations of data design to help communicate information clearly. They are great for English Language Learners, and the rest of us, too! The information can also be either serious or humorous. To see examples of some of the best ones, you can visit: The Best Infographics — 2010 Real World Math - ideas for using Google Earth in math class Real World Math is a site with lessons and ideas for using Google Earth in the math classroom. There are lesson ideas, examples, and downloads for math that are based on active learning and project based learning, including analysis and creativity. The Lessons page has lessons grouped into five categories: Concept Lessons, Project-Based Learning, Exploratory, Measurement and Space. There is a Community page for teachers to collaborate and share lesson ideas.

The A-Z Dictionary of Educational Twitter Hashtags Whether you’re a new or seasoned Twitter user, you likely come across confusing hashtags that probably look like a bunch of nonsense. First, What’s A Hashtag? The # symbol, called a hashtag, is used to mark keyword or topic in a Tweet. Any Twitter user can categorize or follow topics with hashtags.Those hashtags (usually) mean something and are a great way to get a tweet to appear in search results or discussion monitoring. 6 Reasons Most Infographics Don't Cut It You might have noticed that there's been an explosion of infographics over the last year or two. Unfortunately, they seem to have jumped the shark a bit lately with companies cranking out any old thing and sticking the "infographic" title on it. We get tons of pitches from companies about their latest infographics, but only a small fraction actually make the cut. While we love infographics at ReadWriteWeb, we want them to be high quality. Want to have a shot at getting traction with your infographics?

Do I just Google that? Tools for Teaching Search Skills in the Primary Classroom Nowadays many pupils, when given a research task, immediately might think to themselves, “I’ll just Google that.” Internet search engines (of which Google is only one of many) are powerful tools but many pupils use only a fraction of the power of them, and then can also have difficulty finding the information specific to the task. There are many resources now available to help in developing pupil skills in searching more effectively using online search engines. And, of course, when they do find information how do pupils know it is appropriate for the task?

How To Use Evernote for Bookmarking and More Last night on Twitter I mentioned that I had just installed Evernote on one of my Android devices. A handful of people followed up with questions about how to use Evernote and how I use it. Here is the outline of how I'm using Evernote now. Below the outline you will find some videos about how to use Evernote. How I'm Using Evernote Bookmarking - When Google announced that they were removing the list option from Google Bookmarks I started using Evernote for all of my bookmarks. Tips, tricks and resources to make your own gorgeous infographics Infographics (or Information Graphics) are graphic visual representations of data or information, presented in a way to make it easier to consume information. Infographics gained popularity in the mid-2000′s with the advent of sites like Digg and Reddit, and have quickly become one of the most popular methods to display researched data. There are three main types of infographics – where data is presented in a timeline, where statistical data is presented in graphs or with icons, or where data is presented on a map. In order to create an infographic which will be widely shared, think about your typography, colours, and layout.

10 Videos You Could Use to Inspire Writing. From the time teachers first viewed The Piano by Aidan Gibbons on a training course, it suddenly became legitimate to use short independent film to inspire writing. Films like the Piano are perfect for lessons as they are often: Emotive and thought-provokingAesthetic - the animation is often captivating and of high qualityShort and therefore easy for children to take in and teachers to build questioning aroundOriginal – as the children have not seen the film before they do not come at the clip with expectations or baggage. I love finding clips which I use with my class as a weekly alternative to class story.