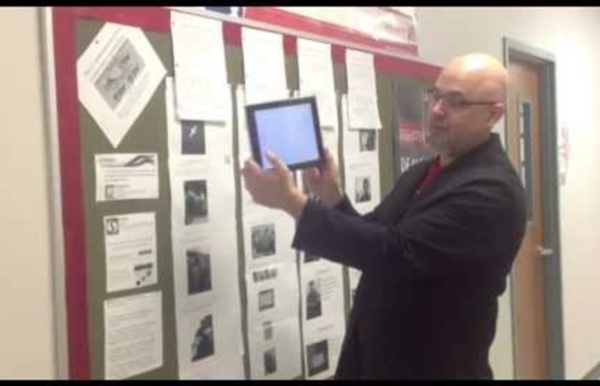 Virtual reality in elearning “We believe this is going to be one of the most transformative platforms for education of all time” – Brendan Iribe, CEO of Oculus VR When you’re exploring the elearning possibilities of a new technology, particularly one that’s as exciting as virtual reality (VR), it’s important to prioritise the needs of learners and not get carried away with capabilities that don’t help reach the learning outcome. There are clearly opportunities to create new types of content and experiences with VR. 5 Ways to Use Aurasma in the Classroom - Teq Post in Apps, BYOD, Classroom Tools, Technology by MarcBrea on Tuesday, February 18th, 2014 Aurasma is an augmented reality application that allows you to overlay any video or image on top of anything that your tablet, cell phone, or any other mobile device can scan with its camera. Using Aurasma is very much like using a QR code reader. In order to activate the overlayed image or video, the object will be scanned using the Aurasma app. Joseph covered using Aurasma in our iPad Appy Hour Webinar.

Augmented Reality in Education String Augmented reality is a 3D learning environment which connects real and virtual world. It provides interactive tools for learning, and fosters informal learning. Besides, augmented reality increases motivation and engages learners. Above all, augmented reality is good for kinesthetic learners; it enables learners participate interactively with computer generated simulations. Más arriba: Spanish Language Exercises Más arriba (©2013 by Gary Aitken) is an interactive workbook of introductory Spanish language exercises, based on the pictorial contextualization of fundamental vocabulary and language points. The exercise material includes full-colour drawings, sound clips, instant feed-back, vocabulary help and a voice recorder (powered by Vocaroo). Más arriba can be used with any introductory approach. You can follow the alphabetical Exercise Index directly below or click here to go to the Lesson Index, provided for users of the Third Canadian Edition of ¡Arriba!

Get Cardboard – Google How do I know which viewers will work with my phone? Choose a viewer that fits your phone's screen size. Most Cardboard apps work with Android 4.1+ and the latest iOS smartphones. Where can I find apps for Cardboard? From the Google Cardboard app on Android and iOS, you can discover Cardboard apps by selecting “GET APPS.”

EdTechTeacher How To Start Using Augmented Reality In Education - from Beth Holland on Edudemic Augmented Reality (AR) allows teachers and students to extend the physical world with a virtual overlay. Whether you have iPad, Android, or a smartphone, scanning a trigger in the physical world with an AR app allows a new layer of information to appear. This information could be a link to a web site, a video, an audio recording, or even a 3D model. Read on to learn more about how to use augmented reality in education. The two most popular tools for creating Augmented Reality, Layar and Aurasma, work with both iOS and Android devices. Using either of these tools, you and your students can create Augmented Reality experiences to extend and enhance the learning context, but how do you know where to begin?