What We Learned: A 1:1 iPad Reflection 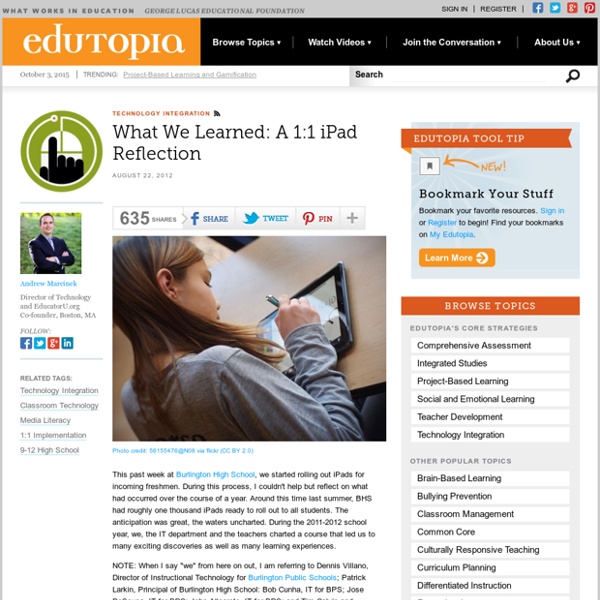 This past week at Burlington High School, we started rolling out iPads for incoming freshmen. During this process, I couldn't help but reflect on what had occurred over the course of a year. Around this time last summer, BHS had roughly one thousand iPads ready to roll out to all students. The anticipation was great, the waters uncharted. During the 2011-2012 school year, we, the IT department and the teachers charted a course that led us to many exciting discoveries as well as many learning experiences. NOTE: When I say "we" from here on out, I am referring to Dennis Villano, Director of Instructional Technology for Burlington Public Schools; Patrick Larkin, Principal of Burlington High School: Bob Cunha, IT for BPS; Jose DeSousa, IT for BPS; John Allegreto, IT for BPS; and Tim Calvin and myself, Instructional Technologists at BHS. The Launch When you unfold such a large-scale initiative as giving every student an iPad, you tend to overthink everything. Learning As We Go Embrace Patience

5 Must-Know Tips For Deploying iPads In Your Classroom If you’re looking to deploy iPads in education, you may think that it’s just a matter of expense and storage. Those things are big, but they’re not the biggest problems you’ll face. In fact, this is one of those situations where money is the least of your troubles. I was chatting with an Edudemic reader this week who wanted to know a few tips and tricks about deploying iPads in his classroom this coming school year. How many devices can use one Apple ID? This is a question that pops up all the time. But long story short, it varies. Basically, you should plan on using free apps for the most part as these are easy to install on any device you have, no matter how many Apple IDs you have / need. How do I store all these various devices? There’s more to storing all these devices than just locking them away in a cabinet you already have. In order to properly store, you’ll also want to have the iPads, Macbooks, iPod Touches, Android devices, etc. all charging at the same time.

Gifting an App How to gift an app from your master iPad account. As a individual consumer with an iTunes account you would normally buy one app and load it onto all of your iOS devices. As a school you need to ensure that you buy one app per device to ensure that you do not break the iTunes licensing agreement. The situation is even more complicated if you are using the device with multiple users, but that's another story. There are three or four viable ways you can do this, each of them have their advantages and pitfalls. The main ways of distributing apps include; Volume LicensingiTunes CardsStudent ManagedGifting Apps Gifting apps is one method I had not thought to use in an educational setting. Having said that many teacher don't want the hassle of managing the devices. A simple how-to for gifting apps. Your master account is simply the account you nominate as the MAIN account for the school. You must pay for the app/s with a credit card. The email received by the recipient will look like this.

Best Practices for Deploying iPads in Schools Digital Tools Teaching Strategies Flickr: Lexie Flickinger By Matt Levinson As schools get ready to deploy iPads this year, each one is scrambling to figure out how to develop an efficient and effective system that works. With no standardized system or uniform roadmap to follow, at the moment, it’s up to individual schools to reach out through their networks to find information about best practices and smooth, streamlined service. Without professional development and a set plan in place, educators in individual classes might be stumped by how to set up iPads for different uses. To that end, here are some ideas about how to put a system in place for iPad use in classrooms:

New approach to geometry takes shape with iPads in schools Holly Blocker’s geometry students at Northeastern Wisconsin Lutheran High School bring to class compasses, rulers and protractors. This year, they’re also carrying iPads. The school, like several others in the area, launched a one-to-one program this year, and is providing tablet computers to each of its 125 students to use both in the classroom and at home. Educators say the devices enhance classroom learning and also encourage students to become familiar with technology they will use later in life. N.E.W. Students also use the iPad to take pictures of formulas she’s written on the board which they can refer to later while doing homework. “It really is such a great resource,” Blocker said. School staff discussed ways to use the technology, and principal Chris Nelson said use varies between classrooms. Blocker, for example, expects about half of math tests will be done on the iPad and half with traditional pencil and paper. “Math is about training the brain,” she said.

Using iPads With Mixed-Ability Students, Teachers Must 'Give Up Some Control' Mobile Learning | Feature Using iPads With Mixed-Ability Students, Teachers Must 'Give Up Some Control' By Kim Fortson09/12/12 The power in today's classroom, according to Amanda Allen and David Lopez, who introduced iPads to their Los Angeles school, is no longer in the teacher's hands. In 2010, when Allen and Lopez helped to pioneer the implementation of 1-to-1 iPads at St. "Technology is too powerful not to use," said Allen, a primary school teacher at the time. St. A Control Issue Allen and Lopez both note that the iPads allowed teachers to cater to mixed ability students, or students of multiple learning levels, with varying learning styles, at the same time. "The biggest challenge was giving up some of the control and being OK with the fact that it might not go perfect the first time, but knowing that we were going to figure it out," Allen said. To achieve these outcomes, both Allen and Lopez gave their students great freedom in the way the tablets were used.

5 Critical Mistakes Schools Make With iPads (And How To Correct Them) Over the last few years K-12 schools and districts across the country have been investing heavily in iPads for classroom use . EdTechTeacher has been leading iPad professional development at many of these schools and we’ve seen firsthand how they approach iPad integration. While we’ve witnessed many effective approaches to incorporating iPads successfully in the classroom, we’re struck by the common mistakes many schools are making with iPads, mistakes that are in some cases crippling the success of these initiatives. We’re sharing these common challenges with you, so your school doesn’t have to make them. 1) Focusing on content apps The most common mistake teachers make with iPads is focusing on subject-specific apps. It simply didn’t occur to him use the VoiceThread app to record his students speaking Latin, or perhaps create a collaborative discussion of Cicero. And we don’t introduce a single subject app. 2) Lack of Teacher Preparation in Classroom Management of iPads It doesn’t.

What Students Can Actually DO With An iPad Online, in workshops, and even with friends, I frequently get asked What can the iPad actually do? as a sort of challenge to the worth of the device. I would rather that they ask, What can you actually do with an iPad? So last week, in preparing for the New England Reading Association Conference and the NYSCATE Mobile Learning Summit , I decided to change my approach. However, before addressing that question, I asked not only WHY iPads but WHY Technology ? I want my students to communicate in complex and modern ways. What does this tangibly look like in the classroom? I want my students to demonstrate their knowledge of the parts of a story. Learning Objectives: In addition to learning the story elements, students learn… To write a constructive review To assess the credibility of an author or source To create a sense of visual hierarchy for their information To document their sources Project: Book Posters – students create a movie-style poster to advertise their book.

New iPad App May Be The Future Of Collaborative Online Learning One of the biggest problems many people have with Khan Academy and YouTube Edu is simply the format. It’s not the fault of Khan or YouTube … it’s just that the passive video format is just that. It’s passive. A San Francisco-based startup called Net Power & Light Inc. wants to change that. Net’s software is called ‘ Spin ‘ which essentially turns passive video watching into interactive group learning. Right now, Spin lets you remix and interact with content from Harvard, Stanford, TED, and the National Geographic Channel. “Teachers felt web-based learning wasn’t giving them the full experience,” Tara Lemmey, Net Power & Light’s co-founder and chief executive officer, said in an interview. So How’s It Work? The App Screenshot The Spin software lets you, like any video player, fast-forward, rewind, skip chapters, and pause videos. Start the video, get your group to join in, watch a bit, then discuss. Get The App “The global class is the next stage in the experiment,” Sandel said. Prof.

How Students Can Create Their Own e-Textbooks On An iPad Two of the most powerful apps on the iPad may be completely invisible: iBooks and the Camera Roll. However, when used together, they have the potential to create powerful learning experiences and dynamic projects. Dynamic Math Portfolios In July, Greg Kulowiec and I taught a workshop on Creating Digital Course Content. One of our participants, a high school math teacher, initially set out to create his own textbook. However, as we started exploring BookCreator, he realized that the real value may be in the students creating their own collection of books over the course of the year. For each chapter covered in the text book, his students could create an eBook. We then discussed workflow and how the students could “turn in” their books. Science Lab Book Collection In August, I worked with a middle school science teacher at Ascension Episcopal School in Lafayette, LA. This year, since her students would be 1:1 with iPads, she would have them create their own collection of lab books.