How to Roll Out a 1:1 iPad Program 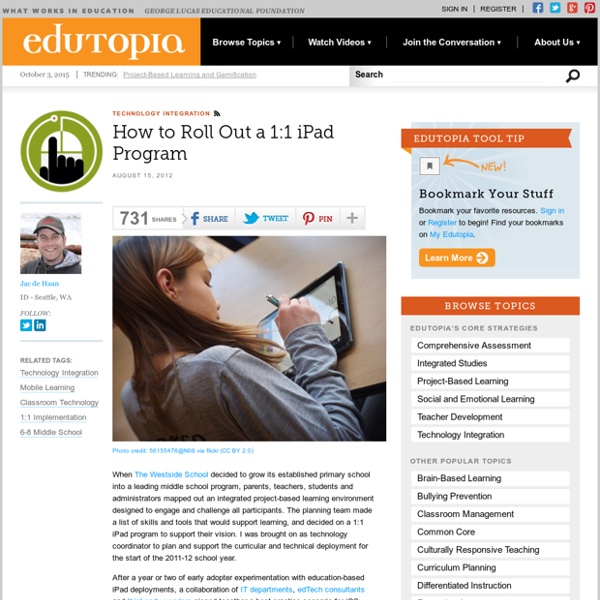 When The Westside School decided to grow its established primary school into a leading middle school program, parents, teachers, students and administrators mapped out an integrated project-based learning environment designed to engage and challenge all participants. The planning team made a list of skills and tools that would support learning, and decided on a 1:1 iPad program to support their vision. I was brought on as technology coordinator to plan and support the curricular and technical deployment for the start of the 2011-12 school year. After a year or two of early adopter experimentation with education-based iPad deployments, a collaboration of IT departments, edTech consultants and third party vendors pieced together a best practice scenario for iOS management. Equally as important to successfully implementing a 1:1 program is the social and curricular roll-out to your school community. Outline of a Phase-In EdTech Guiding Statement Week 1-2: Personal Academic and Social Success

3 Conditions Where 1:1 iPad Programs Make Sense Does your school have a 1:1 iPad program? A 1:1 Chromebook program? Are you thinking about going in this direction? A 1:1 (one-to-one) iPad program is a tough sell. 29 iPad Resources, Tutorials, and Guides Every Teacher Should Know about iPad is gaining momentum in the educational sphere and might , in the near future, be integrated as a leading learning method. iPad is part of the gesture-based technology that is widely embraced by teens and which has pushed some school districts especially here in Canada and also in the States to start using the BYOD approach, for the costs of iPad and their apps is still relatively high. As a teacher who has not yet tried mobile technology in his teaching, you might be wondering where and how to start. What resources to use ? Well, Educational Technology and Mobile Learning has some answers for you.

What We Learned: A 1:1 iPad Reflection This past week at Burlington High School, we started rolling out iPads for incoming freshmen. During this process, I couldn't help but reflect on what had occurred over the course of a year. Around this time last summer, BHS had roughly one thousand iPads ready to roll out to all students. The anticipation was great, the waters uncharted.

Launching an iPad 1-to-1 Program: A Primer Mobile Computing | Spotlight Launching an iPad 1-to-1 Program: A Primer By Mitchell A. Salerno, Michael Vonhof12/14/11 Technology is redefining traditional educational paradigms, and many schools are interested in integrating the latest technological advancements into the school curriculum. While increased incorporation of technology seems to be inevitable, most schools are ill-prepared to enter the 21st century owing to a lack of resources, a dearth of appropriate personnel, and some unrealistic expectations.

100+ Tips on how to Integrate iPad into your Classroom I don't think you should ever miss this slide from Tom Barret. It is one of the best ones available online that provides awesome tips on how teachers can use iPad in their classrooms. We have already covered this topic in several posts in the past but upon checking this slideshow we discovered we mere missing some other tips which we are really glad to know about. The slideshow features 102 ways to use iPad in the classroom and these tips are relevant for all teachers regardless of the subject matter or content area they teach. St. Joseph High School: 1:1 iPad Program In the fall of 2014, St Joseph High School began its 1:1 Apple iPad initiative across all grades. After several years of research, school visits, and conferences, the iPad was selected as the most accessible, resourceful, and practical technology for the college preparatory classroom. Why iPads? The iPad:

After bungled iPad rollout, lessons from LA put tablet technology in a time out Los Angeles – “D” is the letter of the day in Maria Martinez’s kindergarten class at Maywood Elementary. On a recent weekday, Martinez drew a capital and lower-case d on the white board. “Beautiful!” the children shouted. “Nice!” Gadget Turns an iPad into a Document Camera AV & Presentation | News Gadget Turns an iPad into a Document Camera Belkin today unveiled a device, set to ship in March, that converts an iPad into a document camera for classroom presentations. A free companion iPad app, available now, provides whiteboard capabilities and wired and wireless video output for classroom presentations. The Belkin Tablet Stage, pictured, is a stand that's compatible with most tablets, according to the company, including the iPad and iPad mini, with or without a case. It provides an adjustable mount that allows educators to alter the orientation of the iPad, adjust its angle (from flat to vertical), and adjust the device's height.

Apple Overhauling iPad in Education Program to Simplify Sharing Devices and Apps Apple will be making significant changes to iPad deployment for education during the upcoming school year that should eliminate some of the hurdles that school districts face when adopting iPads for use in the classroom. In an email obtained by MacRumors, the company outlines plans to make app distribution easier by eliminating the need for an Apple ID to load apps, tweaking the Apple ID for Students program and unifying several deployment programs into one. Apple plans to simplify app distribution by allowing schools to assign and distribute apps to a device without an Apple ID this fall, reducing the number of steps needed to set up an iPad.

Top 10 Things NOT to do in a 1:1 iPad Initiative Part of the benefit of jumping forward with a 1:1 iPad deployment like we have tried is that we get the opportunity to impart knowledge to other districts looking to do a similar initiative. While that might not seem like a benefit, it actually also means we can make some mistakes because there is not a long history of this type of deployment in the world. Many districts have had 1:1 Laptop projects, which we have benefited from and could easily be applied to this list I’m about to share. However, for the sake of our specific district, and the questions I get from other districts on a daily basis, I’m going to break down the ten things you should NOT do when implementing a 1:1 iPad program. 1. Do NOT wait until the last minute to give them to staff.

50 resources for iPad use in the classroom The transition to the more extensive use of technology in classrooms across the West has resulted in the integration of bring your own device (BYOD) schemes, equipping students with netbooks and tablet computers, and lessons that use social media & online services. Gesture-based technology is on the rise; according to the latest NMC Horizon Report, gesture-based technological models will become more readily integrated as a method of learning within the next few years. The iPhone, iPad, Nintendo Wii and Microsoft Xbox 360 Kinect technology are examples of these kinds of developments, and in particular, resources for Apple products in education are becoming widely available online. For teachers, some of which are just beginning to use tablets and mobile devices in class, these resources can be invaluable in promoting more interactive classrooms and understanding how best to use and control such products. Tutorials:

Professional Development is the Key to 1:1 Success Bellmawr School District in Camden County, New Jersey has long recognized that teacher training is critical for the district to meet its educational objectives. To that end, the district schedule includes dedicated and protected time for ongoing professional development, with peer-led professional learning communities, common planning times, and regular team meetings for teachers at all grade levels. As such, it’s no surprise that when Bellmawr administrators decided to implement a 1:1 initiative at the district’s middle school, providing training to help teachers effectively integrate technology into their classrooms was deemed as important as selecting the right computing devices. “That’s where Intel really stepped up for us,” says Anthony Farinelli, Principal of Bell Oaks Upper Elementary School (grades 5-8), where students began receiving HP EliteBook* Ultrabook™ devices in the fall of 2013. Boosting Student Engagement

WATCH VIDEO: How to Deploy a 1:1 iPad Program in Education So your school is about to launch an iPad program, and you’re not sure where to start? The Apple Management Experts at JAMF Software can help ensure your iPad program is a success. By knowing the right steps and using the right tools, you can easily deploy iPad devices in your school. Going 1:1 with Chromebooks in North Carolina Google Apps for Education and other cloud-based resources are crucial to learning in North Carolina’s Union County Public Schools, so it’s not surprising that the district chose to place rugged Lenovo Chromebooks in the hands of all students in grades 6-12. Union County Public Schools in Monroe, North Carolina, started planning its 1:1 program six years ago with a series of pilot tests across the district. “We tried out several devices with teachers who had the skills to get a feel of what a 1:1 class would look like,” says Scott, lead instructional technology facilitator. “We then set up pilots in middle and high school classrooms to work with students and get their feedback as well.” Based on those tests, UCPS decided to start its full-scale 1:1 rollout in the middle schools because classes are on the same hall and students have the same teachers throughout the day. Once the middle schools were set, the high schools came next.