What The iPad Has Done To Education 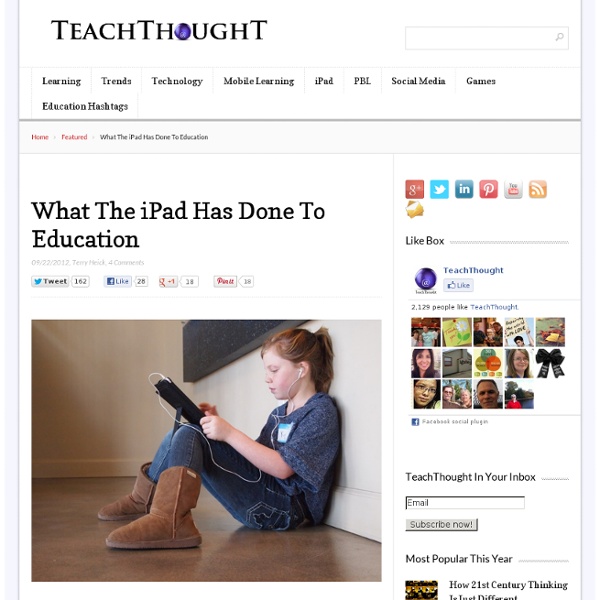 As the iPad approaches popularity that’d make The Beatles blush, it’s easy to forget what technology in learning looked like before the little tablet from Cupertino entered our collective pedagogical consciousness. It’s also easy to forget what exactly it does from a functional perspective that makes it such an effective teaching tool. When adopting any new learning tool, from technology to curricula to instructional strategies, the clearer the picture of how that tool ideally functions can be helpful in improving its use. The Learning Process One of the more powerful ways technology can support learning is by removing barriers. The iPad has been a boon functioning as a communication tool for students who have challenges communicating, from learners with autism to English Language Learners. But it also establishes a more direct link between learners, instruction, and content. Not Everyone Convinced What it is about the iPad that makes this sort of potential possible? What does the iPad “do”?

iPad Workflow Solutions for Educators « Jonathan Wylie Recently, I attended ITEC 2012 -Iowa’s premier technology conference for educators. David Pogue and Marco Torres were the keynote speakers, but there were dozens of other excellent breakout sessions over the course of this three-day event. I myself had the opportunity to present twice, so I opted for a couple of iPad sessions that I had been wanting to talk about for some time now, and I have included the slides to the first of these two sessions below – iPad Workflow Solutions for Educators. A digital workflow for the iPad, or the process of getting student work to and from the device, has long been a subject of some consternation among those who use iPads in the classroom. Why? The reason is simple. Thankfully, this is beginning to change. So, feel free to take a look at some of the options that are available to you if you use iPads in the classroom. Like this: Like Loading...

Top 20 Must-Have Educational iPhone & iPad Apps Used By Real Teachers in the Classroom - iPhone app article - Shara Karasic With the advent of the 2011/2012 school year, teachers who have access to mobile technology are scrambling to find the best education apps for the iPod Touch, iPad and iPhone. Educators use apps for everything from communicating with students to inspiring creativity to dissecting virtual frogs. Luckily, we have lots of educators (including Apple Distinguished Educators) on Appolicious who share their lists of the best education apps for elementary, middle school, junior high, and high school. These are the education apps most listed by educators on Appolicious. 1. 3D Brain (iPad, iPhone. Reviewed by educator lmorris: “This is a great learning tool for any student. Subject/Grade: Science (Biology). 4-12. Listed by: Alline, techsupv, and SkylineiPads. 2. Reviewed by educator lmorris: “This is a great app for learning about priceless pieces of art. Subject/Grade: Art. 6-12. Listed by: justatitch, uwcsea and LaurieFowler. 3. Subject/Grade: Language Arts, Math, Science. 4. Listed by: klbruni331.

Got A New iPad? There's An AppList For That! Are you getting your first iPad today? There are tons of apps out there, and we’re to help you sort out the best of the bunch. With our handy AppLists and AppGuides, you can find the best apps to start your iPad experience off right! Everyone loves a freebie. Fresh Out Of The Box For iPad – Free Edition You’ve got your freebies. Fresh Out Of The Box For iPad – Paid Edition Maybe you’re not quite ready to jump into the app pool just yet. Apps For The App-Averse So you bought an iPad purely for its functionality, right? Best iPad Utilities Ah, who are we kidding. Cool iPad Apps to Demo Are you upgrading for the first time to a Retina display with the new iPad 4? Apps That Show Off The iPad’s Retina Display We’ve mentioned a few games on the above lists, but we realize that for some of you, gaming is a huge part of owning an iPad. Five iPad Games To Download Now iPad App Store Gaming Classics Best iCade Compatible Games iPad Multiplayer Games Want more?

Apple Configurator and VPP Resource Links | Jonathan Wylie I recently attended an Apple workshop on using Apple Configurator and managing a Volume Purchase Program in schools. I am doing both already, but I i picked up a few useful tips. Participants were also sent some links to Apple resources on both Configurator and the VPP, and I don’t think that some of them are all that well known, so I am listing those below for anyone that might be interested. Another useful thing I found recently was the US phone number for the Apple Enterprise team, who have been very helpful answering questions I had on problems with Apple Configurator. You can call them on 1-866-752-7753. I can’t say enough good things about the people I have dealt with in that team, so I am sure they could be a great resource too. I realize that these may be a little technical for some people, but please forward them to your IT team to let them take a look at all that Apple has to support educators in the classroom with iOS devices. Like this: Like Loading... Related In "iPad"

iPad Voice Dictation: Commands List & Tips Voice Dictation, or just Dictation as Apple calls it, is one of my favorite features of iOS on the iPad. As I’ve mentioned recently here, I use it more and more and it just keeps getting better. Though Siri may draw more attention, I think dictation is the far more useful feature right now. If you haven’t tried out dictation on the iPad you really should give it a go. Speak slowly and clearly: I know this sounds obvious, but it’s an easy one to forget. Add punctuation commands as you speak: There are a great number of useful commands that can be used with dictation. This morning I ate breakfast, walked the dog, and took my daughter to school. Use languages Other than US English: Dictation supports a range of languages other than just US English. And here are some of the most helpful commands you can use with dictation – with the command listed first and then the result: question mark: ? exclamation point: ! underscore: _ comma: , open parenthesis: ( close parenthesis: ) quote: “ end quote: “

18 Ways iPads Are Being Used In Classrooms Right Now iPads are quickly becoming a popular and powerful educational tool for classrooms. Beyond the immediate benefit of engaging students, iPads can improve education efficiency and standards. However, many teachers are unsure of how to use them effectively. As the case studies below demonstrate, iPads are being used in education environments around the world with great success. So just what are they doing? 1. 2. 3. 4. 5. 6. 7. 8. 9. 10. 11. 12. 13. 14. 15. 16. 17. Similarly, First Words Animals aids with letter and word identification. 18.

Pain and Remedies of Sharing iPads in Schools There is no end to the uses of the iPad in education. I’ve discussed that ad nauseum on this blog. As a learning tool, it has the potential to make a great positive change to learning. If you have your own iPad, privacy, safety and security boils down to deciding to use a passcode to lock your iPad screen and, if required, being connected to your school’s network filtering system. In our situation, the iPads are mainly for the students but I have assigned each of the iPads to a teacher for overnight borrowing. Our school has had issues with using a proxy server with iPads since we’ve had them. However, a new issue has arisen, albeit with a solution already worked out. The intial workaround is to go into Safari settings and clear the History and Cookies. One successful remedy we have working consistently well is accessing the school network. Again, all of this can be dealt with through a number of file sharing or transferring methods.