Apps for Dyslexia and Learning Disabilities 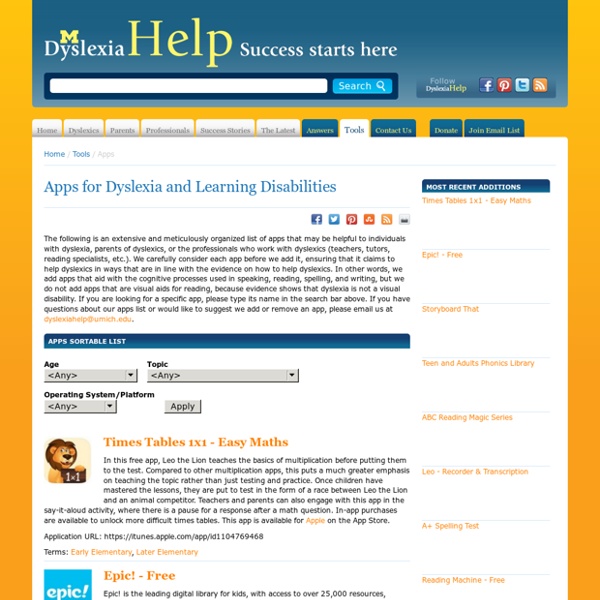 Write in Style is every writer’s best friend. Smart text prediction helps you write in selectable styles, fast and without typos. Writers and bloggers can write in the style of their favorite authors. How would Jane Austen finish this sentence? How would the president phrase the next few words? Write in Style has the answers! Write in Style combines the gray text suggestions known from search engines with the simplicity of a free text area. The best thing is that you can select from a variety of topics, styles and languages to get suggestions fitting your needs: Available styles: W.

“50 Best iPad Apps for Reading Disabilities” “50 Best iPad Apps for Reading Disabilities” Guest Blog by Rosa Ray Whether you’re the parent of a child with a reading disability or an educator that works with learning disabled students on a daily basis, you’re undoubtedly always looking for new tools to help these bright young kids meet their potential and work through their disability. While there are numerous technologies out there that can help, perhaps one of the richest is the iPad, which offers dozens of applications designed to meet the needs of learning disabled kids and beginning readers alike.

Specific Learning Difficulties Published 23 March 2020 The sudden switch to online learning, now happening in many countries, could potentially disadvantage students with Specific Learning Difficulties (SpLDs). In the rush to set up various digital platforms, employ different tools and assign tasks, the needs of students with SpLDs might be ignored or temporarily delegated to the background. Judit Kormos is a Professor in Second Language Acquisition at Lancaster University, where she is the director of the MA TESOL distance programme. Complete Guide to educational and special needs apps, complete list at One Place for Special Needs Complete guide to educational and special needs apps With over 300,000 apps it's easy to become overwhelmed by the number of app choices. It's also easy to spend a small fortune on a lot of useless apps.

Equal Access: Universal Design of Libraries A checklist for making libraries welcoming, accessible, and usable Libraries play an important role in ensuring that everyone has access to information in printed and electronic forms. In making these resources accessible and useful to everyone, principles of universal design (UD) can be employed. Legal Issues Section 504 of the Rehabilitation Act of 1973 and the Americans with Disabilities Act of 1990, and the Americans with Disabilities Act Amendments of 2008 prohibit discrimination against individuals with disabilities. According to these laws, no otherwise qualified person with a disability shall, solely by reason of his or her disability, be excluded from the participation in, be denied the benefits of, or be subjected to discrimination under any program or activity of a public entity.

Debunking the Myths about Dyslexia Upon completion of this section, you will: Be able to discern fact from fiction concerning common dyslexia myths See that dyslexia is commonly misunderstood by the general public There are many signs or clues to dyslexia which are discussed in depth on this website; however it is also important to be aware of the misconceptions and myths surrounding the disorder. There are several myths regarding dyslexia. Educational and Assistive Technology Consulting Services — EdTech Associates As we move from computer-based classrooms to online 24/7 digital learning environments, a closer look on how students with specific learning challenges will be supported needs to be addressed. Undoubtedly, the access to mobile devices has increased significantly with new school models being created as we move to 24/7 access to the curriculum by students with devices like iPads, iPod touches and Xoom. The focus of our resources for students with learning challenges is updated here to include apps for the iPod touch, iPhone and iPad. Return often for revisions for Apps for Dyslexic Students and new resources for students identified with autism. A new day has arrived for dyslexic students where apps have been created to support the challenges that they have on a daily basis in school. Here is the "Top Ten apps" (with links to iTunes) for them to get started.

Sibling's Voice - VOR It was a matinee showing of the Broadway play “The King and I” and the excited audience members took their seats. One mother that was attending, however, decided to bring her autistic son with her and hoped that he wouldn’t be a distraction to the other members of the audience. When the play started, however, things. didn’t go as expected. The mother’s son started making a fuss and members of the audience became frustrated. How the crowd reacted, however, shocked Kelvin Loh, one of the actors in the Broadway play. After the play was over, Kelvin went on Facebook in order to collect his thoughts.

/html5/page.php?kid1=t_d9926f6b91ad2c_f6d350047303ec&kid2=t_d9926f6b91ad2c&d1=classroom.engage.teachertraining&d2=agnesgodo&d3= The labels used to describe Specific Learning Difficulties (SpLDs) vary greatly across contexts. In the USA the Diagnostic and Statistic Manual of Mental Disorders of the American Psychiatric Association uses the label specific learning disorder. In Canada, Australia and the United Kingdom, the terms learning disability and learning difficulty are in use. The labels learning disorder and learning disability are appropriate in the field of biology, medicine and psychology where the focus is on examining the exact nature and cause of SpLDs. In the field of education in the United Kingdom, individuals are often described as having specific learning differences, which reflects the view that if institutions meet the differing needs of students, these learning differences might lose their relevance.

iPad Apps for individuals wirh Special Educational Needs - download a simple guide. Search through the Internet and you will find loads of advice about Apps that meet a whole range of personal, educational and business needs. You can go on for ever exploring new Apps (I do it all the time!) and find you have a device full of Apps and you can’t remember which one you thought would be useful for what! UDL in the ESSA Date: Wednesday, February 17, 2016 This past December, Congress passed the Every Student Succeeds Act (ESSA), which replaces No Child Left Behind. And for the first time, the nation’s general K-12 education law defines and endorses Universal Design for Learning. As CAST’s friends at the National Down Syndrome Society (NDSS) point out— UDL is referenced numerous times throughout the ESSA bill, and states are encouraged to design assessments using UDL principles, to award grants to local education agencies who use UDL, and to adopt technology that aligns with UDL. NDSS and the 45+ fellow members of the National UDL Task Force, which was formed in 2006, have played a critical role in raising awareness on Capitol Hill of UDL’s potential to support better teaching and learning with high expectations for all students, including those with disabilities.

Dyslexia and the Brain: What Does Current Research Tell Us? Click the "References" link above to hide these references. Adams, M.J. (1990). Beginning to read: Thinking and learning about print. Cambridge, MA: MIT Press. American Optometric Association. (2004). iDevices in the Special Education Classroom A number of built-in accessibility features, tools, and add-ons are helping to prompt Apple's iPad into the classroom. Now, the push to get textbooks accessed through this device to get rid of all those heavy books, ah, it is happening!! With a text reader and highlighter, this will really be something worth talking about. Students learn in different ways.