Projecting Your iPad Wirelessly - Without an Apple TV 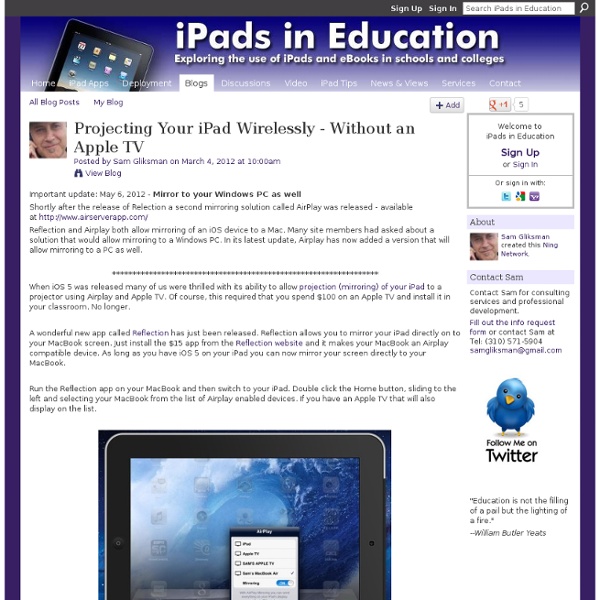 Important update: May 6, 2012 - Mirror to your Windows PC as well Shortly after the release of Relection a second mirroring solution called AirPlay was released - available at Reflection and Airplay both allow mirroring of an iOS device to a Mac. Many site members had asked about a solution that would allow mirroring to a Windows PC. When iOS 5 was released many of us were thrilled with its ability to allow projection (mirroring) of your iPad to a projector using Airplay and Apple TV. A wonderful new app called Reflection has just been released. Run the Reflection app on your MacBook and then switch to your iPad. Once you select your MacBook, you can now display your iPad on the laptop screen (as seen below ... and please don't remind me how many emails I still need to open...). Reflection is a wonderful solution for any situation where you need to project your iPad screen and don't have an Apple TV. When to use Reflection rather than an Apple TV: Sam Gliksman Related:  iPads in the Classroom • willsman

How To Connect An iPad To A Smartboard It’s really simple–so simple that you’re going to feel silly for not having already known this–and if you tweet this out to a colleague without checking out the stunning simplicity of it all, you’re going to feel crunchy (remember that term?) later when you realize it wasn’t quite the revelation you’d thought it might be. Context If you’ve only got one iPad, or are trying to guide the entire class through an activity, the classroom projector can act as a modeling tool for students to follow along. By displaying the iPad on the projector, you’ve got an easy way to broadcast your screen–or a student’s screen during a presentation–to the entire class. What You Need Process To use the Smartboard as a projection display, you only need an Apple VGA adapter, the same style you’d use for other gadgets including monitors. Sorry it wasn’t more intricate or secretive than that.

AirPlay Mirroring to a Mac (no Apple TV required) Update: Reflection has been renamed Reflector. It is available for Macintosh and for Windows PCs. I am so excited for a new Mac app called Reflection! It shows my iPad's screen live on my computer screen wirelessly! In the past I've used different ways to show iPad's screen on a projector to an audience. I've used a document camera, a Point2View webcam, Apple's VGA adapter with an old-fashioned VGA switch, and an expensive Ephiphan VGA2USB signal grabber. All of these past methods require iPad to be stationary. Wireless mirroring to Apple TV is made possible by AirPlay, a feature of iPad 2 and iPhone 4S. As someone who travels, it's not ideal for me to carry around an Apple TV and VGA adapter and hope that I can set it up on the network at the school or conference. Finally a Mac app has been released that does what I've been wanting. Reflection literally takes less than two minutes to setup. Download Reflection and copy it to your Applications folder. What else might you need to know?

Create your own iPad keyboard for less than $10! One of the more common complaints among iPad users is that the keyboard is awkward to use. Apple offers a wireless keyboard solution at the prohibitive price of about $70 plus shipping but you can actually create your own simple iPad keyboard for less than $10. You need two simple components: A USB camera connection kit (see left). This is normally used for connecting digital cameras to your iPad. You can find them on eBay for around $3.A USB keyboard. The process is very easy. Ironically, PC keyboards worked well and the only problem we encountered was in trying to connect some Apple keyboards. Sam Gliksman samgliksman@gmail.com

transferring-worksheets-to-your-ipad Transferring worksheets to your iPad Recently I shared a photo with all of you with my daughter using printables I created on the iPad. Several people emailed me and asked how I did that. So, today I am giving a tutorial on how to do that. By putting worksheets on your iPad, you not only save tons of ink and paper.. But you also make worksheets a bit more fun. Step 1: Have a PDF file of the worksheets you want to put on your iPad. Today I have a simple Fall Worksheet printable to share with you to get you started. To download, please read and agree to my terms of use: To download, click here: Step 2: Once you have a file, make sure you have Dropbox installed on your computer. Step 3: Locate the file you want to put on to your iPad. Then right click on it to copy the file. Step 4: Open up the Dropbox folder. Then right click in the folder and click “paste” Step 4: The file will then appear in the dropbox folder. or Step 6: Open the Good Notes APP on your iPad. Then click on dropbox. Thanks!

Implanted LED Tattoos May Become The Next Big Trend While it may seem like tattoos are the norm now, no one has ink like this. A team from the University of Illinois led by John Rogers has devised a method to actually install LED lights under the skin. The research, published today in Nature Materials, saw the team develop flexible arrays 2.5 μm thick and 100 x 100 μm square which are currently smaller than any commercially available array. In their research, the team printed circuits “directly onto a rigid glass substrate and then transferred them to an inexpensive biocompatible polymer called poly(dimethylsiloxane) (PDMS) to create a mesh-like array of LEDs and photodetectors.” In short, the university team has allowed LEDs to be placed under the skin while allowing for stretching and twisting by as much as 75 percent. Rogers said of his team’s research that commercializing the technology was “incredibly appealing” and he couldn’t wait to see the impact it has. + University of Illinois Via DVICE via PhysOrg

Tip 114 - Audio QR Codes Imagine students’ artwork hanging in your school’s hallway and beside each masterpiece is a QR code. When parents, students, and other teachers scan the code using a mobile device, they hear the student telling about themselves and the relevance of their art... Or what about a QR code in the back of a library book that allows you to hear a student’s review of the book? Or a QR code sent home to parents that allows them to listen to their 1st grader reading or telling a story? Sounds difficult, doesn’t it? Not familiar with QR codes? 2 Options for Recording the audio file and generating a URL: Option 1: 1. Note - The first time you use this site, you will need to click a couple of buttons to set it up. 2. 3. 4. Option 2: 1. 2. 3. 4. 5. Creating the QR Code: Use an online QR Creator 1. - QR Hacker - Kaywa - QuickQR 2. 3. 4. Batch-Generating Codes in a Google Spreadsheet 1. (For instructions, see Tip 111 ) Suggested fields: - First Name

How To Setup Parental Controls (Restrictions) on the iPad The iPad is a wonderfully easy and intuitive device to use. This is generally nothing but a major advantage – but at times it can cause issues if you have children who share your iPad or are allowed to use it from time to time. Problems you might encounter range from a child inadvertently deleting a frequently-used app to discovering that your child’s favorite new iPad game has allowed them to rack up hundreds of dollars worth of charges to your credit card via In-App purchases. Fortunately, the iPad (and iOS) comes with a strong set of parental controls that you can choose to apply to reduce the chances of seeing any problems when you allow your kids to use an iPad, it’s a shared one or one of their own. You’ll find these controls in the iPad’s Settings app – under Settings > General > Restrictions. To get started you tap the ‘Enable Restrictions’ button at the top of the page – when you do you’ll be asked to set a passcode and confirm it. Allow Allow Changes Allowed Content Game Center

$1 Billion Isn’t Cool. You Know What’s Cool? $50 Billion. Goldman And Facebook Agree. While everyone has been busy wondering when Facebook was going to IPO, most were looking past the first question: how is Facebook going to IPO? But not TechCrunch alum Evelyn Rusli and Andrew Ross Sorkin. Tonight the pair are reporting that Goldman Sachs has just led a major new investment in the social network. An investment that values it at a nice round $50 billion. And the likely reason is so Goldman can take Facebook public. More specifically, Goldman has invested $450 million in Facebook while Russian firm (and current large stakeholder) Digital Sky Technologies threw in another $50 million for a total of $500 million in this round. So is the IPO a done deal? Yet. The SEC is said to be looking into whether or not that Facebook is improperly skirting around the rules for going public. Either way, Goldman looks to make a a good chunk of change before the IPO as well. If that doesn’t piss the SEC off too much, that is huge for the firm.

The Teacher's Guide To The One iPad Classroom Today, I’m going to tell you a fairy tale: Once upon a time, my mother in law (a third grade teacher) was in her classroom at school when her principal walked in and gave her an iPad for her class to use. Well, technically it was supposed to be for the entire third grade to share, but that’s almost beside the point. After some initial excitement, she discussed how the entire third grade was supposed to share a single iPad with her fellow third grade teachers, and the iPad was promptly banished into a drawer, never to see the light of day again. The end. Wait, should I have warned you that the fairy tale didn’t have a happy ending? Unfortunately, it isn’t an isolated incident. Use apps for….. ….And more!