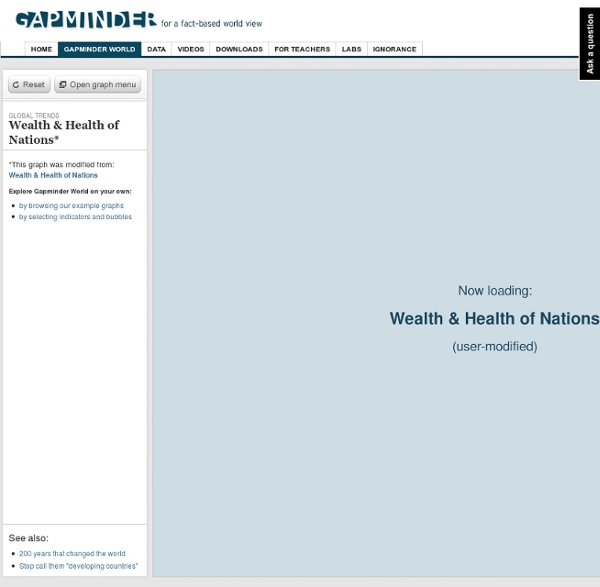 The Joy of Stats About the video Hans Rosling says there’s nothing boring about stats, and then goes on to prove it. A one-hour long documentary produced by Wingspan Productions and broadcast by BBC, 2010. A DVD is available to order from Wingspan Productions. Raising the roof on debt Peter Schiff is one of the few non-biased investment advisors to have correctly called the current bear market before it began. Published time: May 17, 2011 18:38 Today the U.S. government officially borrowed beyond its $14.29 trillion statutory debt limit.

Crisis narrows China-UK gap About this Video 200 years ago, United Kingdom was a leading nation of the world – both in regard to health and economy. In this video, Hans Rosling details UK’s 200-year journey, to present time, and also shows that China, in the coming five years, will narrow the gap to UK faster than ever. Related content Desktop This software has been renamed to Gapminder World Offline Because of technical problems the software on this page is no longer being maintained! Please visit Gapminder World Offline (Beta) instead. Keiser Report — RT Programs Every week Max Keiser looks at all the scandal behind the financial news headlines. Max Keiser and Stacy Herbert discuss Americans as the big globalization losers, though they refuse to admit it because they’ve bought Hot Tips from Losers.... April 26, 2014 11:37

Information is beautiful: war games Amid confusion over the rise in defence cuts, I was surprised to learn that the UK has one of the biggest military budgets in the world - nearly £40bn ($60 bn) in 2008. But I was less surprised to see who had the biggest. Yep, the United States spent a staggering $607bn (£402 bn) on defence in 2008. Currently engaged in what will likely be the longest ground war in US history in Afghanistan. Harbourer of thousands of nuclear weapons. 1.5m soldiers. Fleets of aircrafts, bombs and seemingly endless amounts of military technology. eAtlas of Gender is launched Gender equality matters for development The education and health levels of women and girls have improved greatly over the years. But in many parts of the world, women are still dying in childbirth, or not being born at all, at alarming rates. Women continue to lack voice and decision-making ability in the household and in society; and, their economic opportunities remain very constrained.

Human rights & democracy statistics About this Video In this video, made for the Oslo freedom Forum 2009, Hans Rosling discuss the difficulty in measuring progress in Human Rights in the form of comparable numerical statistics. He also shows the surprisingly weak correlation between existing estimates for democracy and socio-economic progress. L019: Bitcoin P2P Currency: The Most Dangerous Project We've Ever Seen - Launch - Solid discussions of this piece on BoingBoing.net, Hacker News, Slashdot and Reddit. Rob Tercek has a follow up to this piece here. by Jason Calacanis and the LAUNCH team A month ago I heard folks talking online about a virtual currency called bitcoin that is untraceable and un-hackable. Folks were using it to buy and sell drugs online, support content they liked and worst of all -- gasp!

Rhetological Fallacies A brain-blending categorisation and visualisation of errors and manipulations of rhetoric and logical thinking. How many do you use? The word ‘rhetological’ is made up. Just so I can munge two types of entity: rhetorical techniques and logical fallacies. Both are used heavily by institutional powers – governments, religions, political parties, across the entire spectrum to sway opinion, confuse and obfuscate. And, unfortunately, we internalise them, like bad habits, into our own decision-making and mental processes.

Comparison of mining pools Reward types & explanation: CPPSRB - Capped Pay Per Share with Recent Backpay. [1] DGM - Double Geometric Method. A hybrid between PPLNS and Geometric reward types that enables to operator to absorb some of the variance risk. Operator receives portion of payout on short rounds and returns it on longer rounds to normalize payments. [2] ESMPPS - Equalized Shared Maximum Pay Per Share. Boxing Clever: What Law Firms Can Learn From Effective Business Intelligence (Edge Int'l) By Tony Bash, Edge International, UK Managing for success May 2012 10 PRACTICE MANAGEMENT: BUSINESS INTELLIGENCE Ihave been working with law firms for longer than I care to remember, and, over those years, one of the more common terms bandied about has been business intelligence (BI). Sadly, however, time and again, that intelligence has provided very little real insight. This is because effective BI isn’t what often masquerades as it in law firms – a pack of Excel spreadsheets about the firm’s performance that goes out in a hardcopy monthly management report. And no, it isn’t any better if the reports are emailed as PDFs or put on the intranet! BI isn’t anything to do with data that looks at the past, since, as we hear so often, the past is no guide to the future.