The Crisis of Credit Visualized 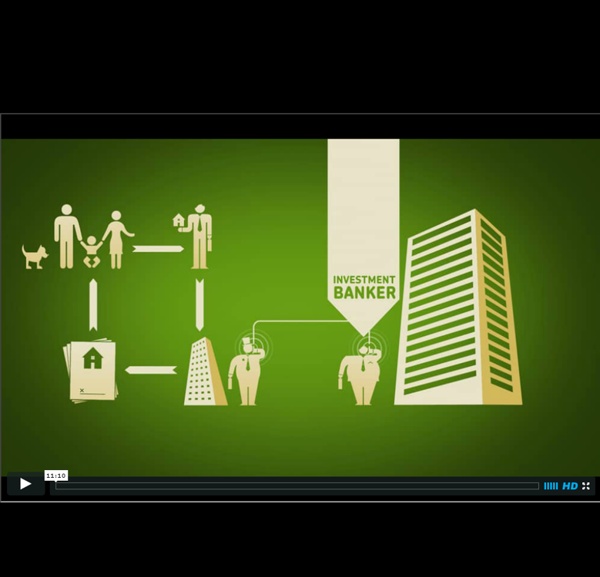 Matt Taibbi on Deluded Tea Partiers, Ayn Rand and How the U.S. Is Like the Soviet Union November 21, 2010 | Like this article? Join our email list: Stay up to date with the latest headlines via email. The United States has become mired in a complex web of economic instruments that are directly tied to the so-called “bubble” economy. Some economists held them as potential means to assist Americans buy homes, but others think these instruments have merely enabled fraudulent behavior that wrecked the U.S. economy.

80+ Excellent Cinema 4D Tutorials and Best Practices CINEMA 4D is a 3-D application that is popular amongst matte painters in film production, largely due to the BodyPaint 3D functionality. It is equally popular amongst motion graphics artists, thanks to its excellent integration with compositing application pipelines, and a very artist-friendly, customizable workflow and interface. It has been used for films such as Chronicles of Narnia, Beowulf, Polar Express, Spiderman 3 and Monster House. CINEMA 4D’s intuitive interface and logical workflow make it possible for those new to 3D artistry to dive in and be productive quickly. Feedback is smooth and interactive so you can let your creativity run free. It’s been weeks, since we have been Rounding-Up Excellent Cinema 4D Tutorials and Best Practices which can help you to create amazing 3D graphics.

The System 472: Road Sage UPDATE: The Quirky Nomads Podcast has made this comic into a radio production! More info here » ALSO: Now avaiable as an 11×17 print! Consumable Youth Rebellion Over the past 30 or so years, most people have chosen to pursue the rewards of conformity instead of the fruits of revolt. What they have been left with are ugly and stupid lives, ugly and stupid places and a planet pushed to the very edge of destruction by capitalism’s efforts to keep feeding them new promises of consumable happiness. But the thought that one is wasting one’s life is not a cheerful one, and respectable citizens everywhere have gone to considerable lengths to avoid it. They cling to these illusions with ferocious desperation; but the whole house of lying ghosts and grim parodies is a fragile one, and it is threatened by the depredations of delinquency. To the extent that delinquency prevents respectable citizens from misperceiving themselves as happy and free people who are blessed with rich experiences and who continue to grow as individuals, it provokes their fury.

More Than 1 Billion People Are Hungry in the World - By Abhijit Banerjee and Esther Duflo For many in the West, poverty is almost synonymous with hunger. Indeed, the announcement by the United Nations Food and Agriculture Organization in 2009 that more than 1 billion people are suffering from hunger grabbed headlines in a way that any number of World Bank estimates of how many poor people live on less than a dollar a day never did. But is it really true? Are there really more than a billion people going to bed hungry each night?

The Tarahumaras: An Endangered Species : Mexico Culture & Arts Shep Lenchek Never conquered by the Aztecs and despite being defeated by Mexican armies, the Tarahumaras still consider themselves an independant nation. So strong is this conviction that in the Fifties they more than once took complaints directly to the United Nations. Revolutionary Spirit In May 1968, the Situationist-inspired Paris riots set off a chain reaction of refusal against consumer capitalism. First students, then workers, then professors, nurses, doctors, bus drivers and a piecemeal league of artists and anarchists took to the streets. They erected barricades, fought with police, occupied offices, factories, railway depots, theaters and university campuses, sang songs, issued manifestoes, sprayed slogans like “Live Without Dead Time” and “Down with the Spectacular-Commodity Culture” all over Paris. The first wildcat general strike in history spread rapidly, first around Paris, then France and then to hundreds of cities and campuses around the world. For a few heady weeks a tantalizing question hung in the air: What if the whole world turned into Paris? Could this be the beginning of the first global revolution?

Is Islam Compatible with Capitalism? by Guy Sorman, City Journal Summer 2011 The Middle East’s future depends on the answer. BeBa/Iberfoto/The Image Works A sixteenth-century Turkish bazaar. Muslim tradition has long accepted the marketplace, though sharia constrained its efficiency. The moment you arrive at the airport in Cairo, you discover how little Egypt—the heart of Arab civilization—is governed by the rule of law. You line up to show your passport to the customs officer; you wait and wait and wait.

Infographic of the Day: Is College Really Worth It? Is going to college really worth it? Probably so, but it's not that clear cut, and economics have been arguing the point for 30 years. Most studies tend to show that college-educated people end up making far more money in the course of their lifetimes. (The niggle: Usually, it's not worth paying for a private university.) Still, that evidence isn't totally cut and dry: What do you really learn in college? FBI: If We Told You, You Might Sue Often when the government tries to suppress information about its surveillance programs, it cites national-security concerns. But not always. In 2008, a few years after the Bush administration's warrantless-wiretapping program was revealed for the first time by the New York Times, Congress passed the FISA Amendments Act. That act authorizes the government to engage in dragnet surveillance of Americans' international communications without meaningful oversight. As we've explained before (including in our lawsuit challenging the statute), the FISA Amendments Act is unconstitutional. In 2009, we also filed a Freedom of Information Act request to learn more about the government's interpretation and implementation of the FISA Amendments Act.

Game changers: Five opportunities for US growth and renewal The US economy is struggling to find a new formula for vigorous growth. But all growth opportunities are not created equal. New McKinsey research pinpoints five catalysts—in energy, trade, technology, infrastructure, and talent development—that can quickly create jobs and deliver a substantial boost to GDP by 2020. An animated video below also runs the numbers on these game changers and frames the challenge for business and government to make the most of the opportunity. Exhibit Infographic of the Day: How Segregated is Your City? Recently, cartographer Bill Rankin produced an astounding map of Chicago, which managed to show the city's areas of racial integration. Eric Fischer saw those maps, and took it upon himself to create similar ones for the top 40 cities in the United States. Fisher used a straight forward method borrowed from Rankin: Using U.S.

A Culture of Fear - Jonathan M. Finegold Catalan Upon the collapse of the Soviet Union, Soviet foreign spokesman Gennadi Gerasimov warned the United States, "We have done the most terrible thing to you that we could possibly have done. We have deprived you of an enemy." For nearly half a century, the elusive threat posed by the Soviet Union formed the basis of American foreign and domestic policy. Much of the United States' political and economic development was in fact a product of the government's exploitation of a supposed Soviet menace. The Hammock Fallacy Hypocrisy is the tribute vice pays to virtue. So when you see something like the current scramble by Republicans to declare their deep concern for America’s poor, it’s a good sign, indicating a positive change in social norms. Goodbye, sneering at the 47 percent; hello, fake compassion. And the big new poverty report from the House Budget Committee, led by Representative Paul Ryan, offers additional reasons for optimism. Mr. Ryan used to rely on “scholarship” from places like the Heritage Foundation.