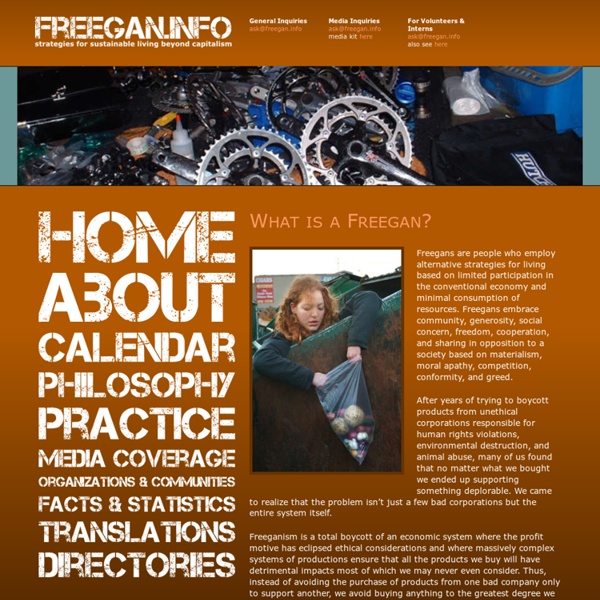 Freegans are people who employ alternative strategies for living based on limited participation in the conventional economy and minimal consumption of resources. Freegans embrace community, generosity, social concern, freedom, cooperation, and sharing in opposition to a society based on materialism, moral apathy, competition, conformity, and greed. After years of trying to boycott products from unethical corporations responsible for human rights violations, environmental destruction, and animal abuse, many of us found that no matter what we bought we ended up supporting something deplorable. We came to realize that the problem isn’t just a few bad corporations but the entire system itself. Freeganism is a total boycott of an economic system where the profit motive has eclipsed ethical considerations and where massively complex systems of productions ensure that all the products we buy will have detrimental impacts most of which we may never even consider.

Signe Chanel: A look inside the House of Chanel This documentary is a little old, but Signe Chanel (House of Chanel) takes us into the world of Chanel Haute Couture. As viewers we see how a collection moves along from conception of ideas, the drawings and pattern making. Then there is the intricate garment creation and eventually the runway show (where Oprah has a small cameo). But what happens after a fashion show? Watch and see, there are some lucky (wealthy) ladies who can afford to purchase these one-of-a-kind, personally tailored garments. If you have fast internet and some time of your hands, it is worth seeing the whole documentary, the amount of work and talent that goes into creating a single garment is amazing.

Freeganism Freeganism is the practice of reclaiming and eating food that has been discarded. Freegans and freeganism are often seen as part of a wider "anti-consumerist" ideology, and freegans often employ a range of alternative living strategies based on limited participation in the conventional economy and minimal consumption of resources. Freegans "embrace community, generosity, social concern, freedom, cooperation, and sharing in opposition to a society based on materialism, moral apathy, competition, conformity, and greed."[1] Practices[edit]

David Graeber on MAUSS Have you noticed how there aren't any new French intellectuals any more? There was a veritable flood in the late '70s and early '80s: Derrida, Foucault, Baudrillard, Kristeva, Lyotard, de Certeau ... but there has been almost no one since. Trendy academics and intellectual hipsters have been forced to endlessly recycle theories now 20 or 30 years old, or turn to countries like Italy or even Slovenia for dazzling meta-theory.

Paula Scher Paula Scher moved to New York City and took her first job as a layout artist for Random House's children's book division. CBS Records In 1972, she was hired by CBS Records to the advertising and promotions department. After two years, she left CBS Records to pursue a more creative endeavor at a competing label, Atlantic Records, where she became the art director, designing her first album covers. A year later Scher returned to CBS as an art director for the cover department.

Campaign against Climate Change The Campaign against Climate Change brings people together to push for the urgent and resolute action we need to prevent the catastrophic destabilisation of global climate. Philosophy Here in the UK the CCC directed its campaigning efforts for many years against the Bush administration in the US because it was the biggest block on any kind of progress towards such an agreement. At the same time we recognise that the UK is amongst the world's richer and longest-industrialised countries whose high-consuming lifestyles and consequent high current and historical emissions of carbon dioxide are the major cause of climate change which will impact hardest and most immediately on the world's poorest and most vulnerable communities.

green family living Domes are common public structures, being used in government legislature buildings, sports complexes and religious buildings…even as covers for road salt. As homes, they are less common, although the igloo is a notable exception. And that’s too bad, because domes are incredibly strong structures that enclose a volume of space more economically than conventional architecture that is based on squares and rectangles. In a dome, the roof and exterior walls are integrated into a continuous curved surface, which removes the need for the space- and material-wasting interior support walls and attic.