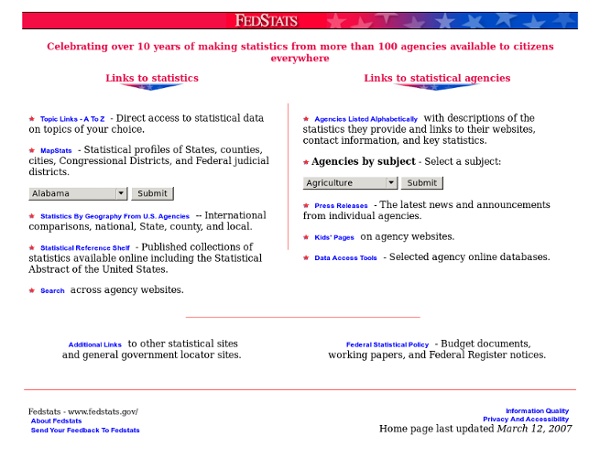 Topic links - A to Z - Direct access to statistical data on topics of your choice. MapStats - Statistical profiles of States, counties, cities, Congressional Districts, and Federal judicial districts. Statistics by geography from U.S. agencies -- International comparisons, national, State, county, and local. Statistical reference shelf - Published collections of statistics available online including the Statistical Abstract of the United States. Search across agency websites. Agencies listed alphabetically with descriptions of the statistics they provide and links to their websites, contact information, and key statistics.

Occupational Outlook Handbook, 2010-11 Edition Funeral Directors Funeral directors, also called morticians and undertakers, manage funeral homes and arrange the details of a funeral. view profile » Human Rights Maps This page contains links to the different human rights maps which I publish on this blog, now and again. These maps form part of one of my main efforts here: a data and statistical approach to human rights issues. More on this here. The maps here are usually world maps or maps for certain continents or countries. Of course they all contain information on particular countries, but if you want to select the blogposts for one particular country only, you may want to do a search instead. To view all the maps at once click here.

Forensic Sites | Ames Laboratory Home » Mfrc » Forensic Sites Forensic Sites Meetings, Conferences, and Short Courses MFRC Training Calendar Democratic Party (United States) Since the 1930s, the party has promoted a social liberal platform.[2][11][12] Until the late 20th century the party had a powerful conservative and populist wing based in the rural South, which over time has greatly diminished. Today its Congressional caucus is composed mostly of progressives and centrists.[13] History The Democratic Party evolved from the Jeffersonian Republican or Democratic-Republican Party organized by Thomas Jefferson and James Madison in opposition to the Federalist party of Alexander Hamilton and John Adams. The party favored republicanism, a weak federal government, states' rights, agrarian interests (especially Southern planters) and strict adherence to the Constitution; it opposed a national bank, close ties to Great Britain, and business and banking interests.

Flip-Flop Refashion: Part 1 (Braided Straps) Summer is great. And warm. And full of outdoor activities and trips to the pool and random walks around the neighborhood. I love it. And my shoe of choice for these warmer months?? As We May Think - Magazine As Director of the Office of Scientific Research and Development, Dr. Vannevar Bush has coordinated the activities of some six thousand leading American scientists in the application of science to warfare. In this significant article he holds up an incentive for scientists when the fighting has ceased. He urges that men of science should then turn to the massive task of making more accessible our bewildering store of knowledge. For years inventions have extended man's physical powers rather than the powers of his mind. Trip hammers that multiply the fists, microscopes that sharpen the eye, and engines of destruction and detection are new results, but not the end results, of modern science.

The 100 Best Video Sites For Educators Bringing multimedia into the classroom is a great way to engage students in learning. Supplementing lessons, opening up new interests, and offering inspiration, online videos make for an incredible teaching tool. In 2010, we covered our favorite 100 video sites for educators, and we’ve now updated our list for 2012 with more than 100 resources and more than 25 brand new entries. AAHA Guidelines OTHER SITES: Career Center | DEVTP | JAAHA | NEWStat | Microchip Lookup | My Veterinary Career | Pet Owners | Students | Yearly Conference Search: More search options Login: Remember me? Anthro-Inspired Mirror You all know we love a good Anthropologie knockoff around here – so a couple of days ago when I was browsing online I came across this mirror. Oh I definitely need that. Hold the presses – did that say $498???

Research Spotlight on Cooperative Learning by NEA staff researchers Found In: teaching strategies Learning can be structured in three ways: Competitive learning - students work against each other. Health care reform benefit changes in 2011 - Mar. 3 By Parija Kavilanz, senior writerMarch 3, 2011: 6:01 AM ET NEW YORK (CNNMoney) -- Under health care reform, consumers will see several new changes to their insurance coverage this year, the most significant of which affects the nation's 47 million Medicare beneficiaries. Amy Bergner, principal with global benefits consulting firm Mercer, said senior citizens who are also Medicare enrollees will see the biggest effects. "One of the most important changes is how much seniors will now pay for prescription medicines," Bergner said. Here's what you need to know: 50% discount on prescription drugs: On Jan. 1, drugmakers began giving seniors a 50% discount on brand-name prescription medicines filled in the Medicare Part D "coverage gap."