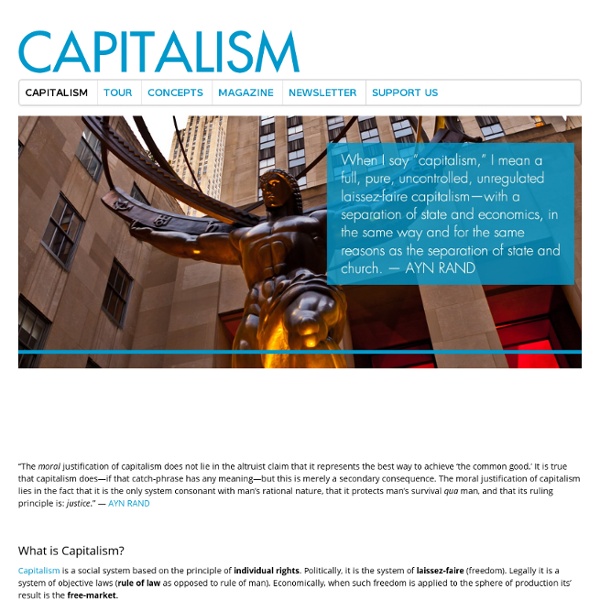 Laissez-faire Etymology and usage[edit] Legend has it that the term laissaez faire originated in a meeting that took place around 1681 between powerful French Comptroller-General of Finances Jean-Baptiste Colbert and a group of French businessmen headed by a certain M. Le Gendre. When the eager mercantilist minister asked how the French state could be of service to the merchants and help promote their commerce, Le Gendre replied simply "Laissez-nous faire" ("Leave it to us" or "Let us do ["it," the French verb not having to take an object]").[2] The anecdote on the Colbert–Le Gendre meeting appeared in a 1751 article in the Journal économique, written by French minister and champion of free trade René de Voyer, Marquis d'Argenson—also the first known appearance of the term in print.[3] Argenson himself had used the phrase earlier (1736) in his own diaries, in a famous outburst: Laissez faire, telle devrait être la devise de toute puissance publique, depuis que le monde est civilisé ... China[edit]

Adam Smith, Wealth of Nations, Content Introduction Chapter 1. Of the Division of Stock Chapter 2. Of Money considered as a particular branch of the general Society, or of the Expense of maintaining the National Capital Chapter 3. Chapter 4. Chapter 5. Introduction Chapter 1. Chapter 2. Chapter 3. Part 1. PART 2. CHAPTER 4. CHAPTER 5. CHAPTER VI Of Treaties of Commerce CHAPTER VII Of Colonies PART 1 Of the Motives for establishing new Colonies PART 2 Causes of Prosperity of New Colonies PART 3 Of the Advantages which Europe has derived from the Discovery of America, and from that of a Passage to the East Indies by the Cape of Good Hope CHAPTER VIII Conclusion of the Mercantile System CHAPTER IX Of the Agricultural Systems, or of those Systems of Political Economy which represent the Produce of Land as either the sole or the principal Source of the Revenue and Wealth every Country

The Great Domain of Cost-Plus: The Waste Production Economy The mainstream Left faults corporate capitalism for planned obsolescence, waste, and general excess — but usually misses the statist root of the problem. Kevin Carson, though, consistently strikes it. His eleventh research study for the Center is now available for download: The Great Domain of Cost-Plus: The Waste Production Economy [PDF] Cost-Plus: The Waste Production Economy By Kevin Carson “Mass production requires running machinery at full speed to minimize unit costs, without regard to preexisting demand. This “ready to print” version of Cost-Plus was created by Invisible Molotov. Invisible Molotov is a market anarchist zine distro & publishing house. Translations for this article: Portuguese, O Grande Domínio do Custo Acrescido: A Economia de Produção de Desperdício.

Finance for Physicists Finance for Physicists This page arose because I am often asked for advice and suggestions about how to prepare for, and get a job on Wall Street as a quantitative analyst. Everything here is subjective and personal opinion, but I hope that you will find it useful. What do physicists actually do on Wall Street? Risky business on Wall Street? Physics with finance at the University of Illinois at Urbana-Champaign In order to provide a cheap and easy way for physics students at my home institution to become knowledgeable in finance, I created a course option that yields a Masters in Finance for Physics students. Courses at other universities There are many courses offered in computational finance at academic institutions. Job hunting on Wall Street To get a job on Wall St., it is essential to be well-prepared and knowledgeable about financial derivatives. A fun place to start is the ingenious Comix series, from the trade magazine Derivatives Strategy. Books J. E. Getting a job

STUDY: The Market, Not Government, Is The Worker’s Friend FOR IMMEDIATE RELEASE 09/30/10 POC Thomas L. Knapp media@c4ss.org 530-618-C4SS September 30 – In the Center for a Stateless Society’s latest study, “Labor Struggle: A Free Market Model,” C4SS Research Associate Kevin Carson examines the role of state labor regulation in halting the progress of unionism and explores the real source of pre-Wagner Act gains for labor: Direct action and worker solidarity in the face of combined state and corporate power. “The predominance of the conventional strike as we know it, as the primary weapon of labor struggle,” writes Carson, “is in fact a byproduct of the labor relations regime created under the Wagner Act. … In the system of labor relations extant before Wagner, strikes were only one part of the total range of available tactics. The Center for a Stateless Society is a project of the Molinari Institute, dedicated to building public awareness of, and support for, market anarchism. -30- about 210 words

Beyond Super-Elites and Conspicuous Consumption: Real Ecological Sustainability in the Twenty-First Century This "Chapter Eighteen" is part twenty of Truthout's continuing series of excerpts from Gar Alperovitz's "America beyond Capitalism." This is an exclusive Truthout series from political economist and author Gar Alperovitz. We are publishing weekly installments of the new edition of "America Beyond Capitalism," a visionary book first published in 2005, whose time has come. Donate to Truthout and receive a free copy. Pluralist Commonwealth strategies aim to undercut forces that permit unrestrained expansion by building up converging lines of foundational restructuring over time, especially those that reduce key inequality and psychological consumption drivers and develop new community cultural norms. Although there is dispute about the precise dimensions of the problem, prudence alone suggests the importance of confronting basic ecological limits. Just how strong such pressures can be is suggested by studies of what Americans feel they need in order to achieve their hoped-for goals.

Commanding Heights : Jeffrey Sachs | on PB The Rich Nation/Poor Nation Gap INTERVIEWER: The demonstrators at Seattle in Washington seem to see the world as a frightening place. What are they afraid of? JEFFREY SACHS: Globalization has clearly raised lots of different kinds of concerns that the world is not a very fair place right now. INTERVIEWER: You were in Seattle yourself. JEFFREY SACHS: I saw the demonstrators ... on the streets. INTERVIEWER: One of the big things that you referred to is the gap between the rich countries and the poor countries. JEFFREY SACHS: The world is more unequal than at any time in world history. It happens that the real success stories, those countries that we now call the developed economies, were the high-income economies or, somewhat of a misnomer, the industrialized economies. INTERVIEWER: That's a great moral problem of our age, isn't it? JEFFREY SACHS: It is an incredible moral problem -- how to live together with this vast gap in wealth. back to top The Rapid Pace of Change Since the 1980s

Serious Inflation Signs in PPI Numbers "There’s really nothing here to shake my view that deflation, not inflation, is the threat." -Paul Krugman in the New York Times on November 7, 2010. There is simply no way to interpret the current Producer Price Index data other than price inflation continues to trend higher. The PPI for finished goods rose 0.8 percent in January, seasonally adjusted, the U.S. At the earlier stages of processing, prices received by manufacturers of intermediate goods moved up 1.1 percent (a 13.2 per cent annualized rate), and of greatest concern the crude goods index rose 3.3 percent (a 39.6 annualized rate). For the 3-month period ended in January, crude material prices climbed 11.5 percent after moving up 8.8 percent from July to October. Even Nixon's core inflation came in at 0.5 per cent, an annualized rate of 6.0 per cent.

Exponential Economist Meets Finite Physicist [slimstat f='count' w='ip' lf='resource contains economist'] views this month; [slimstat f='count' w='ip' lf='strtotime equals 2011-07-01|interval equals -1'] overall Some while back, I found myself sitting next to an accomplished economics professor at a dinner event. Shortly after pleasantries, I said to him, “economic growth cannot continue indefinitely,” just to see where things would go. It was a lively and informative conversation. I was somewhat alarmed by the disconnect between economic theory and physical constraints—not for the first time, but here it was up-close and personal. Cast of characters: Physicist, played by me; Economist, played by an established economics professor from a prestigious institution. Note: because I have a better retention of my own thoughts than those of my conversational companion, this recreation is lopsided to represent my own points/words. Act One: Bread and Butter Physicist: Hi, I’m Tom. Economist: Hi Tom, I’m [ahem..cough]. Total U.S.