8 Empowering Middle Grade Novels for Kids Interested in Social Justice - The B&N Kids Blog. As the United States watches a new administration take over the White House after a contentious election year, a wave of social and political activism has swept the country. 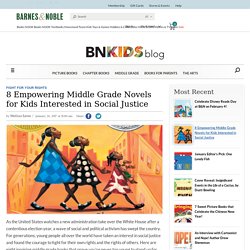 For generations, young people all over the world have taken an interest in social justice and found the courage to fight for their own rights and the rights of others. Here are eight inspiring middle grade books that prove you’re never too young to stand up for what you believe in and make a difference. The Breadwinner Trilogy, by Deborah Ellis This series follows 11-year-old Parvana, who lives under Taliban rule in Afghanistan. For Teachers - Diverse and Multicultural Children's Literature - LITED 3121 Advanced Children's Literature - Watson and Meachum - LibGuides at University of Northern Iowa. Black Children's Literature Got de Blues - Nancy Tolson Call Number: UNI Stacks PS153.N5 T66 2008 Publication Date: 2008 Here is an innovative exploration of the blues aesthetic that reflects the literary work created by Black authors and illustrators for the Black child reader. 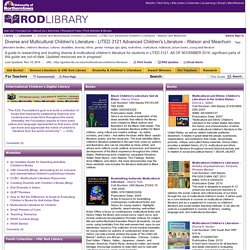 This book examines literature written for Black children, using critical and creative writings - by artists, scholars, and critics - that define the blues within Black «adult» literature, poetry, and the visual arts. T. Photo At a book signing for “Surf’s Up,” my newest picture book about two frogs searching for the perfect book, a librarian approached me. 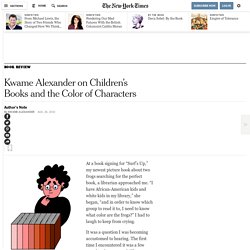 “I have African-American kids and white kids in my library,” she began, “and in order to know which group to read it to, I need to know what color are the frogs?” I had to laugh to keep from crying. It was a question I was becoming accustomed to hearing. The first time I encountered it was a few months after my novel “The Crossover” was published. Without a doubt, the public- and private-school students in Dallas and Pasadena and Aurora, Ill., who read “The Crossover” know the race of the main characters — as do the students I’ve worked with in Singapore and Ghana.

When we segregate literature, we focus only on mirrors. The mind of an adult begins in the imagination of a child. 30 Multicultural Picture Books about Immigration. June is Immigrant Heritage Month! 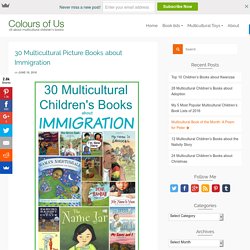 Throughout the month, the diverse heritage of the United States as a nation of immigrants is celebrated. A great opportunity to teach all children empathy and kindness towards new immigrants with these touching multicultural picture books about immigration! And for children who have gone or are going through the difficult experience of immigration, these books can be helpful in talking about it and processing their feelings. Multicultural Picture Books about Immigration Preschool The Name Jar by Yangsook Choi Recently arrived from Korea, Unhei worries that her new class mates won’t be able to pronounce her name.

Two White Rabbitsby Jairo Buitrago Told from a little girl’s perspective, Two White Rabbits follows her and her father as they travel north toward the US border. More 2016 Américas Award titles: 2016 Américas Award Winning Children’s Books The Seeds of Friendshipby Michael Foreman Elementary School African Immigrants. This Land Is Our Land. 25 Titles to Celebrate Hispanic Heritage Month – Picture Books. 24 Sep Finally getting back on track, up early today to work on this awesome list and then headed to the Princeton Children’s Literature Festival for the day… can’t wait! 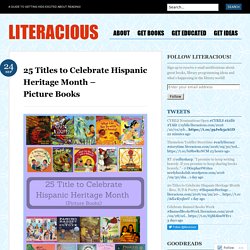 A side note, many of these titles focus on Mexican or Mexican American characters and although there are some on the list from other Hispanic countries, those titles are more difficult to come across. Gathering the Sun: An Alphabet in Spanish and English by Alma Flor AdaChato’s Kitchen by Gary SotoDoña Flor by Pat MoraWhat Can You Do with a Paleta? By Carmen TafollaBebé Goes Shopping by Susan Middleton ElyaRound is a Tortilla: A Book of Shapes by Roseanne ThongPapá and Me by Arthur DorrosWhat Can You Do with a Rebozo?

Like this: Like Loading... Tags: bilingual, Hispanic authors, Hispanic characters, Hispanic Heritage Month, Hispanic illustrators, picture books, read aloud. The Uncomfortable Truth About Children's Books. Shannon Wright One afternoon last fall, I found myself reading my picture book The Sea Serpent and Me to a group of schoolchildren in the island nation of Grenada. 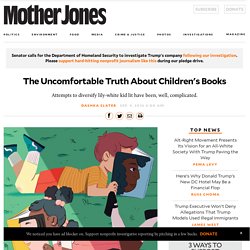 The story is about a little girl who befriends a tiny serpent that falls out of her bathroom faucet. I had thought it would appeal to children who lived by the sea, but as I looked at their uncomprehending faces, I realized how wrong I was. It wasn't just my American accent and unfamiliar vocabulary, but the story's central dilemma: The girl wants to keep the serpent at home with her, but as each day passes, he grows larger and larger. "What do you think she should do? " "Kill him and cook him," one kid suggested. It took me a few seconds to understand that he wasn't joking. Roughly 80 percent of the children's book world—authors and illustrators, editors, execs, marketers, and reviewers—is white. I think of that kid from time to time when I need to remind myself that my worldview is pretty limited. 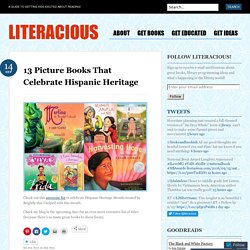 Check my blog in the upcoming days for an even more extensive list of titles (because there’s so many great books to chose from).