Zopa - Loans from people not banks 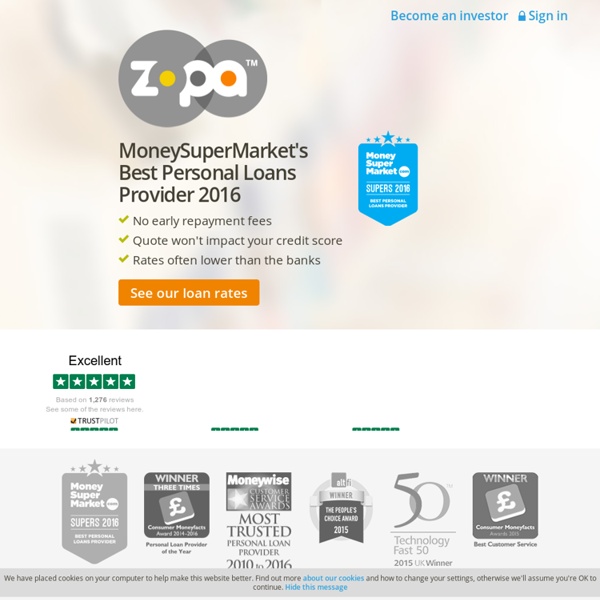 We have placed cookies on your computer to help make this website better. Find out more about our cookies and how to change your settings, otherwise we'll assume you're OK to continue. Hide this message © Zopa Limited 2014 All rights reserved. 'Zopa' and the Zopa logo are trade marks of Zopa Limited. Zopa is a member of CIFAS– the UK's leading anti-fraud association, and we are registered with the Office of the Information Commissioner (No.

Related:  Jobs of the future and Automation • Mix

Kinobi Will Use Kinect To Teach You Yoga, Dancing Or Maybe Even Surgery YouTube makes it easy to find instructional videos on practically any topic. There are 18,600,000 search results for “how to” on the site at the moment. Obviously not all of them are relevant, but that’s a staggering number. But if you’re trying to learn a physical skill — like dancing, yoga or martial arts — how can you tell if you’re doing the moves correctly? Kinobi wants to solve this problem by using the Microsoft Kinect device to monitor your activity and give you real-time feedback. Peerbackers Strength in Numbers peerbackers is a new way to fund entrepreneurs. It is an online funding platform that allows business owners to raise capital from their “peers”—in small increments—in exchange for tangible rewards to those who contribute. We’re the connectors— our online marketplace directly links business people who are looking for a small amount of start-up or growth capital with individuals who are willing to contribute that funding in small increments. These individuals can be friends, family or complete strangers…but they all share one thing—at least $10 to spare and a desire to have a positive impact on the world. Not to mention—the contributors get cool rewards too!

Crowd funding Crowdfunding is the practice of funding a project or venture by raising monetary contributions from a large number of people, typically via the internet.[1] One early-stage equity expert described it as “the practice of raising funds from two or more people over the internet towards a common Service, Project, Product, Investment, Cause, and Experience, or SPPICE.”[2] The crowdfunding model is fueled by three types of actors: the project initiator who proposes the idea and/or project to be funded; individuals or groups who support the idea; and a moderating organization (the "platform") that brings the parties together to launch the idea.[3] In 2013, the crowdfunding industry grew to be over $5.1 billion worldwide.[4] History[edit] Types[edit]

OneRiot.com – Realtime Search for the Realtime Web A few weeks ago, a small team from @WalmartLabs visited the offices of OneRiot in beautiful Boulder, Colorado. OneRiot has developed some pretty nifty technology that analyzes social media signals from popular networks like Twitter and Facebook to deliver ads that are relevant to consumers’ interests. As our teams debated the finer points of Big Data, Fast Data, and machine learning technologies, it became clear to us that we could find no better colleagues than the guys at OneRiot. As a part of Walmart, we're continuing to work with the intensity of a technology startup. Today I’m pumped to share the news that, within 30 days of that first meeting, we have closed a transaction to acquire the key assets of OneRiot. The technology team at OneRiot will move to Silicon Valley and become part of @WalmartLabs in September.

The Myth of a Superhuman AI I’ve heard that in the future computerized AIs will become so much smarter than us that they will take all our jobs and resources, and humans will go extinct. Is this true? That’s the most common question I get whenever I give a talk about AI. The questioners are earnest; their worry stems in part from some experts who are asking themselves the same thing. Resumes Are Bullshit. HireArt Is Better. HireArt, a newly launched Y Combinator-backed company, is working to solve a major problem that all employers face today: resumes are bullshit. Job candidates often like to fluff up their experience, and sometimes they even outright lie about their abilities. Other times, potentially great employees are overlooked because they have unorthodox backgrounds that don’t match up with what an employer thinks they need in terms of experience. Sometimes these kinds of things are realized during the in-person interview.

How Memoto raised $500,000 on Kickstarter, part 1. Still being in something of a shock over the overwhelming response Memoto’s Kickstarter project has had, we feel we need, for reasons of self-therapy if nothing else, to put down in words what has really happened these past few weeks since we launched. We will do this in two parts, one where we describe the process leading up to the launch of the project and one where we disclose some lessons learned during the actual project. So, what’s Kickstarter? Well basically, it’s a website for crowdfunding projects. Anyone can set up a project and seek funding – and anyone can fund a project. 10 Ways to Start a Fund for Social Good Online Fundraising is a key component for most social good campaigns and projects. Thanks to the the Internet and the social web, raising money for a non-profit, community project or charitable organization or relief effort is easier than ever before. The web makes it possible to get your message across and collect money from people all over the world and to include your social graph in the process. If you have an idea or a cause that you want to bring awareness to and raise funds around, there are lots of great online tools to help get you started. Whether you want to raise money for a local community center or help fundraise as part of a broader social good campaign, these tools make it easy to get the word out and collect the funds you need.

Robots Will Transform Fast Food Visitors to Henn-na, a restaurant outside Nagasaki, Japan, are greeted by a peculiar sight: their food being prepared by a row of humanoid robots that bear a passing resemblance to the Terminator. The “head chef,” incongruously named Andrew, specializes in okonomiyaki, a Japanese pancake. Using his two long arms, he stirs batter in a metal bowl, then pours it onto a hot grill.

Trouble waking up? This ejector bed should fix that If you're one of the 7 billion people in this world, you probably have trouble waking up in the morning. An impetuous inventor from the UK has just solved this problem. YouTuber Colin Furze built what he's calling a "High Voltage Ejector Bed," and the name pretty much says it all. Furze built a metal frame which resembles a Murphy bed, except instead of folding backwards to be flush with a wall, it pushes the bed forward away from the wall. An air compressor powers two pistons which push the bed forward at a set speed. Furze also added lights and a couple of trumpets for maximum wake-up power.

Hacking Kickstarter: How to Raise $100,000 in 10 Days (Includes Successful Templates, E-mails, etc.) Mike Del Ponte co-founded Soma, which raised more than $100,000 on Kickstarter using virtual assistants and free apps. I first met Mike Del Ponte two years ago when he was running marketing at BranchOut, a startup I advise. Before joining BranchOut, Mike had explored a variety of career paths, including preparing for the priesthood at Yale Divinity School and serving as a peacemaker in the West Bank. Earlier this year, Mike came to me with a new product idea called Soma. Soma is, in its simplest form, a high-end competitor to Brita water filters. A World Without Work 1. Youngstown, U.S.A. The end of work is still just a futuristic concept for most of the United States, but it is something like a moment in history for Youngstown, Ohio, one its residents can cite with precision: September 19, 1977. For much of the 20th century, Youngstown’s steel mills delivered such great prosperity that the city was a model of the American dream, boasting a median income and a homeownership rate that were among the nation’s highest.