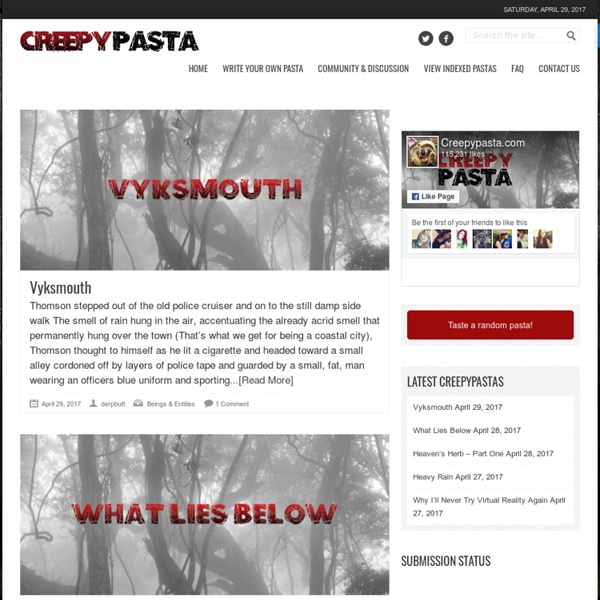 Rating: 8.0/10 (61 votes cast) [Please read the first in the Chalk series here! -Derp] You would think that being a cult investigator would be so exciting that I couldn’t get bored. The problem is that I get completely obsessed with something, learn everything about it, and when I figure there’s nothing new to see I lose all interest. It doesn’t matter how freaky the subject is or how dangerous, there comes a point where I get the sense that I’ve seen it all, done it all, and it’s time to move on.

History's Most Overlooked Mysteries Tuan C. Nguyen | July 25, 2007 10:23am ET Credit: Photographed by Aurel Stein, circa 1910 Although many of life's great mysteries remain unsolved, there are some lesser known ones that also have stumped researchers for centuries. Here's a look at some of the most intriguing historical mysteries, from the mysterious, and blonde, Tarim mummies from China to the undecipherable Voynich manuscript to lost city of Helike. CLEANSING AND CHARGING CRYSTALS Cleansing crystals using herbs is a lovely way. Two herbs spring to mind straight away, Cedar and Sage both being powerful aromatic healing herbs. The best way to do this is to buy a smudging pack which consists of a block of the herb all tied up together so that it can be picked up easily in one go. Then light the ends of the block and allow to smoulder. Hold the crystal over the smoking herb saying the appropriate words. It is probably a good idea to have smudged the whole room, before you started to cleanse the sacred space.

How it's made Have you ever wondered how Pringles get Pringle-shaped? Or how about pretzels? How is any machine able to mass produce the food and products we love so much? These mesmerizing animated gifs show just how it’s done for 22 different everyday items… you won’t be able to look away. (Seriously, it’s going to be extremely difficult to stop watching these.)

Paranormal Zone X Amityville: The True Story In December 1975, George and Kathleen Lutz and their three children moved into 112 Ocean Avenue, a large Dutch Colonial house in Amityville. This was a suburban neighborhood which was located on the south shore of Long Island, New York. Ghosts, spirits, and paranormal activity in a haunted house My desire to pursue psychic development evolved from my initial curiosity in ghosts which began when I was a teenager growing up in a home where paranormal phenomenon occurred. Since then I have become more knowledgeable and respectful of spirits and abandoned the word ghosts. Our family home was built by my great-great-grandfather in 1910 in Wilkes-Barre, a small industrial city in northeastern Pennsylvania.

Real Nurses Share True Ghost Stories Here are a few creepy tales from AllNurses.com, a website dedicated to nurses and the medical profession. Pleasant dreams! Don’t Let Them Take Me The best I have heard is from a nurse who said that one night she was floated to oncology at the hospital where she used to work. UNEXPLAINED PHENOMENA - The Alternative Top Ten Over the past decades the designs have become increasingly complex and still remain a mystery as to their origin. Clearly some of the formations are man-made but experts are quick to point out that it is fairly easy to identify these as their construction is often very basic and there is usually evidence of human activity ranging from footprints to vehicle tracks. However, a great many of the formations simply seem to appear as if from out of nowhere - often during the night but occasionally during broad daylight. Crop circles in Wiltshire often appear at the centre of the county and within a 15 mile radius of the megalithic stone circles of Avebury. They tend to materialise from late April and continue to manifest throughout the summer months of June, July and August.

Auras and energy, energy healing and energy stones & crystals The common phrase is “I see your true colors,” which is a reference to someone’s true intentions…their true self. Auras are someone’s true colors, these shades of energy that surround us tell our story to readers who are able to see them. The hues that hover or float around us reveal our personalities, emotional state, physical health, and much more. Humans are not the only beings that possess auras since animals and plants also have energy that radiates. An aura reader can see these shades of energy that surround us by entering into a shallow meditative state so that they can focus their psychic vision. Once in this state, a reader can observe the array of colors and discern what may be upsetting a client or reveal information about them.

10 Mind-Blowing Theories That Will Change Your Perception of the World Reality is not as obvious and simple as we like to think. Some of the things that we accept as true at face value are notoriously wrong. Scientists and philosophers have made every effort to change our common perceptions of it. Scientist Photographs The Soul Leaving The Body Source: esotericonline.net The timing of astral disembodiment in which the spirit leaves the body has been captured by Russian scientist Konstantin Korotkov, who photographed a person at the moment of his death with a bioelectrographic camera. The image taken using the gas discharge visualization method, an advanced technique of Kirlian photography, shows in blue the life force of the person leaving the body gradually. According to Korotkov, navel and head are the parties who first lose their life force (which would be the soul) and the groin and the heart are the last areas where the spirit before surfing the phantasmagoria of the infinite. In other cases, according to Korotkov, the “the soul” of people who suffer a violent and unexpected death usually manifests a state of confusion in your power settings and return to the body in the days following death.

6 Insane Discoveries That Science Can't Explain We like to feel superior to the people who lived centuries ago, what with their shitty mud huts and curing colds by drilling a hole in their skulls. But we have to give them credit: They left behind some artifacts that have left the smartest of modern scientists scratching their heads. For instance, you have the following enigmas that we believe were created for no other purpose than to fuck with future generations. The Voynich Manuscript The Mystery: The Voynich manuscript is an ancient book that has thwarted all attempts at deciphering its contents. How to Use Crystals the Simple Way There are numerous ways to use your stones. Just to name a few common ways. Meditation, Altars or special area for your collection, room placement, your work place, vehicles, carrying them and wearing them as jewelry or mineral makeup. In simplest terms, using them will fall into one of “The Four Its”. 1. Hold It

haha yeah creepypasta is pretty strange for a name! by daz666 Jul 28

www.creepypasta.com is the best websites ever for reading scary stories! Though I can't understand why they chose the name "Creepypasta"..... by klutzybookworm Jul 28