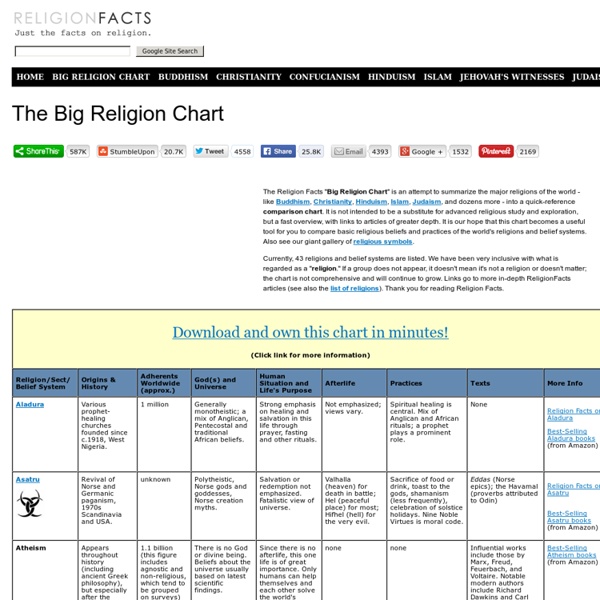 The major world religions The information provided below is intended to provide a short introduction to the major world religions as defined classically. Each description has been kept very short so that it is easy to read straight through all of them and get a general impression of the diversity of spiritual paths humanity takes to live the kind of life God wants. As a result, a great many things have been omitted. The First Principles of Theosophy The First Principles of Theosophy By Curuppumullage Jinarajadasa First published in 1921 Theosophy is the wisdom arising from the study of the evolution of life and form. World religions Menu Sponsored link. Symbols of some of the largest religions in the world: The symbols of fourteen religions are shown. Clockwise from the North Pole, they are: Baha'i, Buddhism, Christianity, Confucianism, Hinduism, Islam, Jainism, Judaism, Shinto, Sikhism, Taoism, Wicca and some other Neopagan religions, Zoroastrianism, and Druidism.

Difference Between Islam and Buddhism Islam vs Buddhism When it comes to some of the major religions in the world, a lot of people are skeptical, or even fearful of something that they do not know a lot about. Here, we will try to do away with some of the most common misconceptions regarding the two most common religions in the world: Islam and Buddhism. First, let’s take a look at what Islam, as a religion, is all about.

Steve Beckow: The Christ Child Within By Steve Beckow, Golden Age of Gaia, May 1, 2015 There’s no knowledge more important than the knowledge of who we are. And who we are is God. Comparison of Genesis with Creation Stories of the Ancient Near East One Viewpoint Many professors in colleges, universities and seminaries today agree with the following ideas and teach them to their students. This is one reason young people who have had a strong religious faith lose it when they go to college. For many centuries, Jewish and Christian theologians agreed that the accounts of the world's origin given in Genesis were not only inspired by God, but owed nothing to any other scriptures.

Atheist, Gnostic, Theist, Agnostic Too many times I have informed someone that I am an atheist, only to have them reply, “Oh, but how could you know that God doesn’t exist? You’re taking a faith position!” Many headaches later, we finally come to an agreement over the definitions of these words. This arrangement is an attempt to clarify and classify these words, so that their rogue meanings no longer confuse and muddle religious debate.

Johnsmallman's Blog All of God’s divine creation, all sentient beings, even those who appear to be utterly unaware of their inherent divine nature, are assisting humanity at this point in its spiritual awakening. All are One. There is no separation, there is only an illusion of separation, and therefore throughout creation all sentient life is involved and taking part in the grand awakening process. You are not, and never have been alone or abandoned, you are just experiencing a dream that seems very real. The Story Of The Storytellers - The Gnostic Gospels The 52 texts discovered in Nag Hammadi, Egypt include 'secret' gospels poems and myths attributing to Jesus sayings and beliefs which are very different from the New Testament. Scholar Elaine Pagels explores these documents and their implications. From The Gnostic Gospels by Elaine Pagels Vintage Books, New York: 1979 pp. xiii-xxiii In December 1945 an Arab peasant made an astonishing archeological discovery in Upper Egypt.

An atheist at Christmas Christmas is inevitably a rather problematic time for atheists. Does one sour the mood, somewhere between the turkey and the pudding, and overtly declare the entire festivity is built on the naivety and, if one's feeling particularly spiky, the blatant stupidity of one's ancestors? Or does one simply fill up the stocking, sing Away In A Manger and go with the occasion in a spirit of politeness?