Why Our Food is So Dependent on Oil. "Concentrate on what cannot lie. 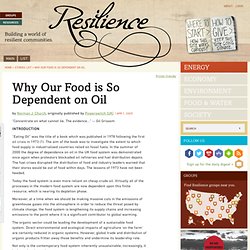 The evidence... " -- Gil Grissom “Eating Oil” was the title of a book which was published in 1978 following the first oil crisis in 1973 (1). The aim of the book was to investigate the extent to which food supply in industrialised countries relied on fossil fuels. In the summer of 2000 the degree of dependence on oil in the UK food system was demonstrated once again when protestors blockaded oil refineries and fuel distribution depots. Activism Humor. Speaker Leaves Audience Stunned: The Secret of Food Marketing. Pay special attention to how people react to the speaker. 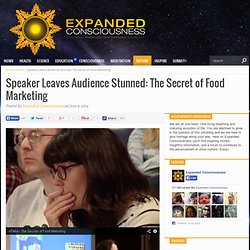 Full disclosure: The speaker in this video is actually an actress named Kate Miles, but the facts about produce and its marketing are 100% real. The audience is also real, and thus the looks of disgust are totally real too. 9 Facts About Factory Farms: 1) According to the USDA, 36.8 billion pounds of broiler chicken were raised and killed for consumption in 2013. Since these animals live in such close quarters, some farm operators remove the beaks of chickens, turkeys and ducks to keep them from pecking one another to death, often by burning or cutting the beaks off. 2) In 2011, more than 80 percent of antibiotics produced were fed to livestock. 3) According to one study, 65 percent of all hogs tested had pneumonia-like lesions on their lungs.

Hy-Line defended this practice by insisting that it was industry standard. Source: Huffington Post Video Courtesy of Catsnake. Something Horrible Was Done To Our Wheat In The 60's That We're Just Realizing Now. Gluten intolerance is no longer a fringe medical concept. 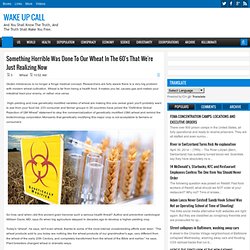 Researchers are fully aware there is a very big problem with modern wheat cultivation. Wheat is far from being a health food. It makes you fat, causes gas and makes your intestinal tract your enemy, or rather vice-versa. High-yielding and now genetically modified varieties of wheat are making this one cereal grain you'll probably want to axe from your food list. 233 consumer and farmer groups in 26 countries have joined the “Definitive Global Rejection of GM Wheat” statement to stop the commercialization of genetically modified (GM) wheat and remind the biotechnology corporation Monsanto that genetically modifying this major crop is not acceptable to farmers or consumers.

So how–and when–did this ancient grain become such a serious health threat? Something Horrible Was Done To Our Wheat In The 60's That We're Just Realizing Now. Gluten intolerance is no longer a fringe medical concept. 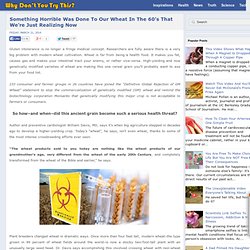 Researchers are fully aware there is a very big problem with modern wheat cultivation. Wheat is far from being a health food. It makes you fat, causes gas and makes your intestinal tract your enemy, or rather vice-versa. Growing Food is Like Printing Your Own Money. Join Ron as he embarks on his next project: igniting a (horti)cultural revolution! 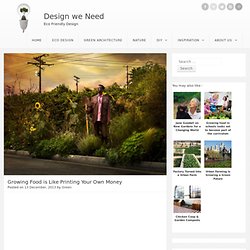 Ron envisions a world where gangstas garden, where cool kids know their nutrition and where communities embrace the act of growing, knowing and sharing the best of the earth’s fresh-grown food. Ron is ready to realize his vision for community gardening and rejuvenation. Self-taught African Teen Wows M.I.T. Scientists calculate the energy required to store wind and solar power on the grid. By Mark Shwartz Charles Barnhart A new study finds that it may be better for the environment to temporarily shut down a wind turbine than to store the surplus electricity it generates. 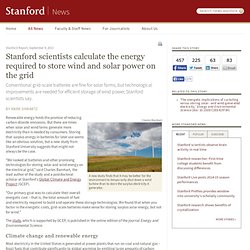 Renewable energy holds the promise of reducing carbon dioxide emissions. But there are times when solar and wind farms generate more electricity than is needed by consumers. Storing that surplus energy in batteries for later use seems like an obvious solution, but a new study from Stanford University suggests that might not always be the case. "We looked at batteries and other promising technologies for storing solar and wind energy on the electrical grid," said Charles Barnhart, the lead author of the study and a postdoctoral scholar at Stanford's Global Climate and Energy Project (GCEP).

"Our primary goal was to calculate their overall energetic cost – that is, the total amount of fuel and electricity required to build and operate these storage technologies. Climate change and renewable energy Other options. Roundup: The sneaky and cheap contraceptive hiding in your food. (NaturalNews) The dirty truth about glyphosate, the active chemical in Monsanto's Roundup herbicide formula, keeps rearing its ugly head, this time in a new study published in the journal Free Radical Medicine & Biology. 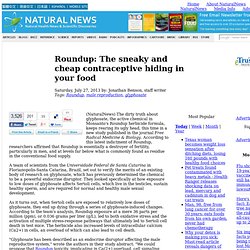 According to this latest indictment of Roundup, researchers affirmed that Roundup is essentially a destroyer of fertility, particularly in men, and at levels far below what is commonly found as residue in the conventional food supply. A team of scientists from the Universidade Federal de Santa Catarina in Florianopolis-Santa Catarina, Brazil, set out to verify the merits of an existing body of research on glyphosate, which has previously determined the chemical to be a powerful endocrine disruptor.

They looked specifically at how exposure to low doses of glyphosate affects Sertoli cells, which live in the testicles, sustain healthy sperm, and are required for normal and healthy male sexual development.