SYNERGY -Oneness of the Elements

PHILLIP COLLINS. Phillip Collins brings a multi-dimensional background into being one of the co-founders of The Angel News Network and founder of The Modern Day Mystery School as a teacher/life coach, author/poet, filmmaker and healing arts light ascension therapist addressing the balancing of our emotional, mental and physical bodies during the transformational times. 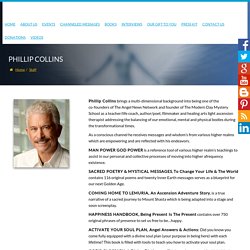 As a conscious channel he receives messages and wisdom’s from various higher realms which are empowering and are reflected with his endeavors. MAN POWER GOD POWER is a reference tool of various higher realm’s teachings to assist in our personal and collective processes of moving into higher afrequency existence. SACRED POETRY & MYSTICAL MESSAGES, To Change Your Life & The World contains 116 original poems and twenty Inner Earth messages serves as a blueprint for our next Golden Age. HAPPINESS HANDBOOK, Being Present Is The Present contains over 750 original phrases of presence to set us free to be…happy. NewRealities - New York's Portal for Mind, Body, Spirit Activities - Home. My Beautiful Disaster: Derek Amato at TEDxMiddlebury. The Breath Center – Breathwork and Holistic Healing in Los Angeles.

Sustainable Flow - Home. Contact - Center for Quantum Activism. Mind and Meaning in Politics The worldview of scientific materialism not only undermines consciousness but also undermines all our experiences except the sensory physical ones and, even then, only the object pole of it. 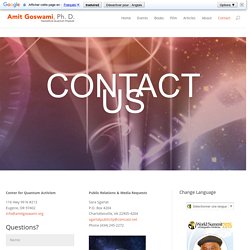 When we do science within the primacy of consciousness, we can include not only the subject pole... (Read More) Quantum Politics, Part III In the quantum worldview of evolution, a human being currently is defined by a mental ego. (Read More) Quantum Physicist Amit Goswami has co-founded Quantum Economics Business Coaching™ in collaboration with Dr. Non-Locality: We are all interconnected - even without signals, and experimental evidence is proving our inherent unity.

Tangled Hierarchy: In our brain, we become one with the neuronal images of an external object because of a tangled-hierarchy, a circularity. Contact - Center for Quantum Activism. Contact Us. CE4 Research Group - STOP alien abductions, is it possible? YES. What you are about to see is probably the best kept secret in the UFO research community. 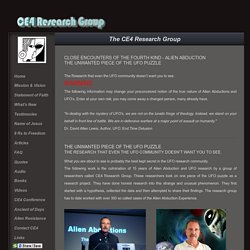 The following work is the culmination of 15 years of Alien Abduction and UFO research by a group of researchers called CE4 Research Group. These researchers took on one piece of the UFO puzzle as a research project. They have done honest research into this strange and unusual phenomenon. They first started with a hypothesis, collected the data and then attempted to share their findings.

The research group has to date worked with over 350 so called cases of the Alien Abduction Experience. Joe Jordan is the President and co-founder of CE4 Research Group, an Alien Abduction investigation and research team based out of Cocoa, Florida. He has spoken during six Roswell UFO Festivals in Roswell, New Mexico, including the 60th Anniversary Conference in 2007. 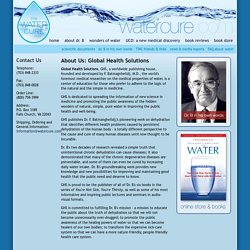 Box 3189 Falls Church, VA 22043 Shipping, Ordering and General Information:information@watercure.com Global Health Solutions, GHS, a worldwide publishing house, founded and developed by F. GHS is dedicated to spreading the information of new science in medicine and promoting the public awareness of the hidden wonders of natural, simple, pure water in improving the public health and well-being. GHS publishes Dr. Dr. GHS is proud to be the publisher of all of Dr. GHS is committed to fulfilling Dr. NewRealities - New York's Portal for Mind, Body, Spirit Activities - Home. Hydrogen House Project: Mike Strizki's Bio - Hydrogen House Project. Founder of the Hydrogen House Project, Mike Strizki served as Project Engineer for over 16 years with the Office of Research and Technology in the New Jersey Department of Transportation where he developed renewable energy technologies. 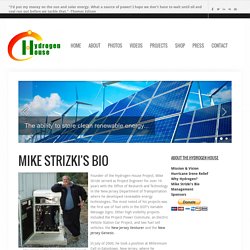 The most noted of his projects was the first use of fuel cells in the DOT’s Variable Message Signs. Other high visibility projects included the Project Power Commute, an Electric Vehicle Station Car Project, and two fuel cell vehicles: the New Jersey Venturer and the New Jersey Genesis. In July of 2000, he took a position at Millennium Cell in Eatontown, New Jersey, where he completed a world range record with the New Jersey Genesis, a distance of over 400 miles on a single refueling. In 2003 he served as Project Engineer for both the Peugeot Fuel Cell Fire Engine and the Duffy Fuel Cell Electric Boat. In January 2004, he joined the team at Advanced Solar Products as a project engineer for photovoltaic installations. Support Charles L. Gilchrist creating Mandala Fine Art, Sacred Geometry Videos.