The Appearance and The Work of God

10 How can man ascertain God’s existence since he cannot see God? And how does God work to save man? The answer from God’s word: “How many creatures are there living and reproducing in the vast expanse of the universe, following the law of life over and over, adhering to one constant rule. 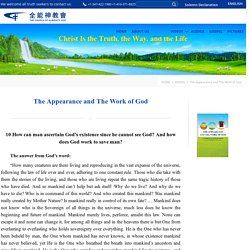 Those who die take with them the stories of the living, and those who are living repeat the same tragic history of those who have died. And so mankind can’t help but ask itself: Why do we live? And why do we have to die? Who is in command of this world? 9 Since God loves man, why will He send disasters to destroy all the wicked who resist God? The answer from God’s word: “The approach of the end of all things indicates the end of God’s work and indicates the end of humanity’s development. 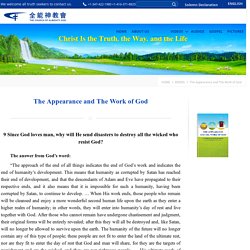 This means that humanity as corrupted by Satan has reached their end of development, and that the descendants of Adam and Eve have propagated to their respective ends, and it also means that it is impossible for such a humanity, having been corrupted by Satan, to continue to develop. … When His work ends, those people who remain will be cleansed and enjoy a more wonderful second human life upon the earth as they enter a higher realm of humanity; in other words, they will enter into humanity’s day of rest and live together with God. After those who cannot remain have undergone chastisement and judgment, their original forms will be entirely revealed; after this they will all be destroyed and, like Satan, will no longer be allowed to survive upon the earth. From “God and Man Will Enter Into Rest Together” in The Word Appears in the Flesh. 8 Why does one have to pray, have meetings, and read God’s words while believing in God so as to receive a new life?

The answer from God’s word: “Prayer is one of the ways in which man cooperates with God, it is a means by which man calls upon God, and it is the process by which man is touched by God’s Spirit. 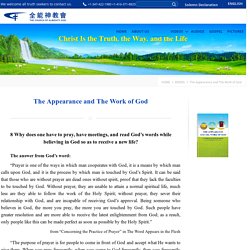 It can be said that those who are without prayer are dead ones without spirit, proof that they lack the faculties to be touched by God. 7 A common saying goes, “Everyone will die if the heaven falls.” Will the believers in God be spared of death when disasters befall? The answer from God’s word: “God created this world, He created this mankind, and moreover He was the architect of ancient Greek culture and human civilization. 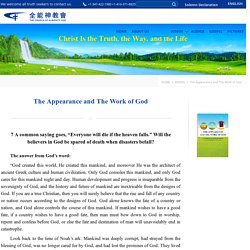 Only God consoles this mankind, and only God cares for this mankind night and day. Human development and progress is inseparable from the sovereignty of God, and the history and future of mankind are inextricable from the designs of God. If you are a true Christian, then you will surely believe that the rise and fall of any country or nation occurs according to the designs of God. 6 Can one be saved if he does not believe in God but only accumulates good deeds without doing evil? The answer from God’s word: “… without the guidance of God, no matter how much rulers and sociologists wrack their brains to preserve human civilization, it is to no avail. 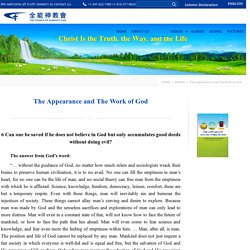 No one can fill the emptiness in man’s heart, for no one can be the life of man, and no social theory can free man from the emptiness with which he is afflicted. Science, knowledge, freedom, democracy, leisure, comfort, these are but a temporary respite. Even with these things, man will inevitably sin and bemoan the injustices of society.

These things cannot allay man’s craving and desire to explore. From “God Presides Over the Fate of All Mankind” in The Word Appears in the Flesh. 5 A common saying goes, “Good will be rewarded with good, and evil with evil.” Then why doesn’t God destroy all the wicked? 4 Can Buddhists or Taoists be saved by separating themselves from the human society to practice Buddhism or Taoism? Bible Reference: “Why should the heathen say, Where is now their God? 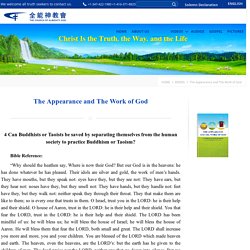 3 In my view, every religion teaches people to be good. Is it that one can be saved as long as he believes sincerely and does not do evil, regardless of which religion he believes in? The answer from God’s word: “He who is incapable of creating the world will be incapable of bringing it to an end, whereas He who created the world will surely bring it to an end, and so if one is unable to bring the age to an end and is merely to help man cultivate his mind, then he will surely not be God, and will surely not be the Lord of mankind. 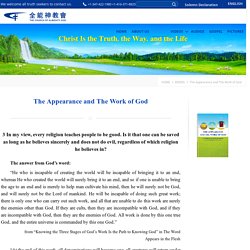 He will be incapable of doing such great work; there is only one who can carry out such work, and all that are unable to do this work are surely the enemies other than God. 2 Why is the world dark and evil? Is it that mankind should be destroyed when they have been corrupted to the utmost? The answer from God’s word: “Man lost his God-fearing heart after being corrupted by Satan and lost the function that one of God’s creatures should have, becoming an enemy disobedient to God. 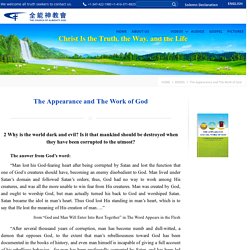 Man lived under Satan’s domain and followed Satan’s orders; thus, God had no way to work among His creatures, and was all the more unable to win fear from His creatures. 1 Why should mankind believe in God?