Harvard referencing 2013. F4D3. 'Am I ugly?' YouTube video: Worrying new trend sees tweens asking the public about their looks. By Daisy Dumas Updated: 14:08 GMT, 21 February 2012 Teen and tween girls and boys are posting clips of themselves on to YouTube accompanied by the question 'Am I ugly? 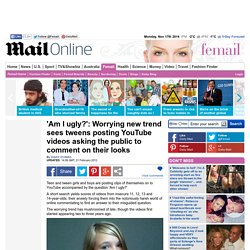 ' A short search yields scores of videos from insecure 11, 12, 13 and 14-year-olds, their anxiety forcing them into the notoriously harsh world of online commentating to find an answer to their misguided question. The worrying trend has mushroomed of late, though the videos first started appearing two to three years ago. Worrying: Young, impressionable girls are taking to YouTube to ask the public whether they are ugly, fat or pretty. Shoshan Roberts now receiving RAPE threats from online commenters. A hidden camera video showing actress Shoshan Roberts receiving comments from men on the street has been viewed over 11.8million timesMen tell her 'What's up, Beautiful? 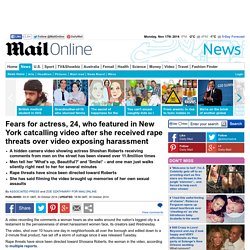 ' Gender Swap uses Oculus Rift to put you in another body. BeAnother Lab is taking advantage of the first-person perspective of Oculus Rift to explore ideas of gender, intimacy, mutual respect and more. 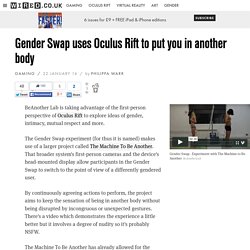 The Gender Swap experiment (for thus it is named) makes use of a larger project called The Machine To Be Another. VIDEO: Hidden camera reveals cat calls, harassment of New York City woman. We've all seen versions of the cliche scene where a woman walks by a construction site and all the laborers turn her way, whistling and shouting catcalls to get her attention. 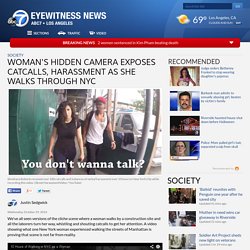 A video showing what one New York woman experienced walking the streets of Manhattan is proving that scene is not far from reality. Tap to see video if viewing on News app. The video, posted to YouTube by Street HarassmentVideo and sponsored by Hollaback, an organization aimed at ending street harassment, shows Shoshana B. This App Lets You Share Your Life With A Stranger For 20 Days.

Imagine intimately watching the life of a stranger on the other side of the world from the palm of your hand. 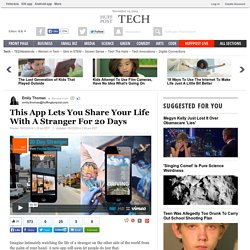 A new app will soon let people do just that. Researchers at MIT have teamed up with The Dalai Lama Center for Ethics and Transformative Values to launch an iPhone app called 20 Day Stranger, which connects two anonymous strangers for 20 days. Oculus Rift exhibit lets couples swap bodies. The Gender Swap experiment was set up by BeAnotherLab in BarcelonaIts system lets people experience the world through another person’s eyesEach partner wears an Oculus Rift head-mounted display Using built-in cameras, the image from one display is shown on the otherBy synchronising movements, wearers 'experience' their partner's body By Victoria Woollaston Published: 11:14 GMT, 22 January 2014 | Updated: 13:10 GMT, 22 January 2014. 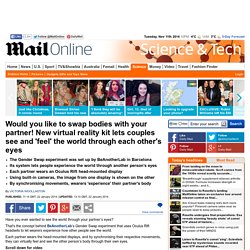 Pills for Weightloss and Lipsuction Alternatives - Reverse Women's Hair Loss. If someone told you 20 years ago that women would be on waiting lists to have botulinum toxin injected in their face, chances are you would have thought that person was nuts. 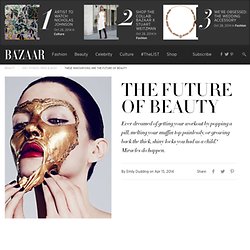 Alas, no one has yet come up with a way to truly turn back the hands of time. Nevertheless, there is some amazing work being done in labs that has the potential to change how we look, feel, and age in the not-so-distant future. Researchers are busy trying to fulfill some of our most deeply held beauty wishes, from the benefits of exercise without lifting a finger to having a full head of hair well into old age. But while we may not be quite there, there is reason to hope. Just ask the thousands of mice in research labs, looking pretty darn svelte, no treadmill required. Channel 4 to broadcast alternative to "insulting" housing estate ident. Revolution by Russell Brand – digested read. Russell Brand admits he's 'open minded' about 9/11 conspiracy theories in Newsnight interview with Evan Davis - People - News. The comedian turned political activist was in typically combative form during his promotional interview with new anchor Evan Davis last night, scheduled to push the release of his new book, Revolution. 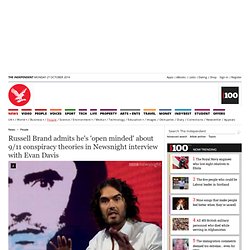 As well as shouting about his utopian stance on social reform, he also admitted he remained perceptive to the validity of 9/11 conspiracy theories. "We have to remain open-minded to kind of possibility," he said, asked by Davis whether he believed the terror attacks on the Twin Towers had been orchestrated by the American government. Responding to Davis's description of his ideas as "piecemeal", Brand retorted: "You don't understand. We don't want hegemonic figures coming in and didactically shouting at us, we want to organise ourselves. " Elsewhere during the heated debate, he claimed that the BBC "shamefully sabotaged" the Scottish Independence Referendum. The HuffPost Election Panel: The Young, Undecided Voters That Parties Need In 2015.

From the student sit-ins to the poll tax riots, politics was once the domain of the young and angry. 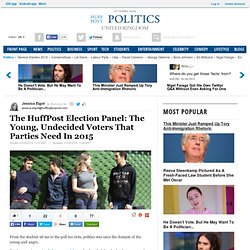 But in 2010, just 44% of 18-24 year-olds, trudged to their local school or community centre to wedge their paper into the ballot box. Dubai looks to dominate plastic surgery market with medical tourism. DUBAI, United Arab Emirates -- Dubai, the emirate known for its celebration of over-the-top glamour and luxury, is racing ahead to dominate the Middle East's plastic surgery market with plans to attract half a million medical tourists in six years. 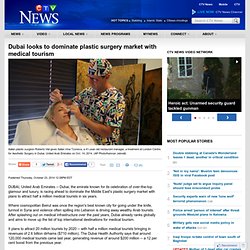 Where cosmopolitan Beirut was once the region's best known city for going under the knife, turmoil in Syria and violence often spilling into Lebanon is driving away wealthy Arab tourists. After splashing out on medical infrastructure over the past years, Dubai already ranks globally and aims to move up the list of top international destinations for medical tourism. It plans to attract 20 million tourists by 2020 -- with half a million medical tourists bringing in revenues of 2.6 billion dirhams ($710 million). The Dubai Health Authority says that around 120,000 medical tourists came last year, generating revenue of around $200 million -- a 12 per cent boost from the previous year. Through the Wormhole - "Will We Become God" Movie: future tourists could "travel the virtual world" Future tourists could "travel the virtual world instead of the physical" Dezeen and MINI Frontiers: advances in 3D-scanning technology could enable virtual tourism by providing a "life-like experience" of faraway places says architect Pernilla Ohrstedt (+ movie).

"In the near future it's really conceivable that we will start travelling the virtual world instead of the physical world, because it will be scanned at such high resolution," she says. Sou Fujimoto stacks aluminium boxes for "nomadic house" installation. Japanese architect Sou Fujimoto has created an installation in Paris' Jardins des Tuileries composed of suspended metal cubes and plants, for the FIAC art fair. Commissioned by Parisian art gallery Philippe Gravier, the Many Small Cubes installation features stacked boxes – some filled with plants and small trees – that are connected either just on one corner or one edge. Together they create a structure with seemingly random cantilevers and openings on a tree-lined avenue in the Tuileries park. A void in the centre represents the "living area", with formal entrances at either side and lots of other access points if "one doesn't mind lowering their head," said a statement from Fujimoto.

The Dezeen guide to Brutalist architecture.

Cloning. Online Behaviour. Icloud. It’s not just women: everyone lies on Facebook. Prenups will now include a no-tweeting clause. Why women constantly lie about life on Facebook. According to the OnePoll survey, one third of women surveyed admitted to “dishonesty” on social media sites such as Facebook and Twitter at some stage. Social Media is Virtual Escapism — TheGutes. A$AP Rocky's Awesome Generation. What is the best contribution for the next generation? The class of 2014 answers: What makes your generation different from the generation before? Life without i-technology, why it's no life at all. Digital dependency has pulled in a generation. Are we being short changed by the currency of social media? Will facebook become the new home of ecommerce? Reality isn't Working.