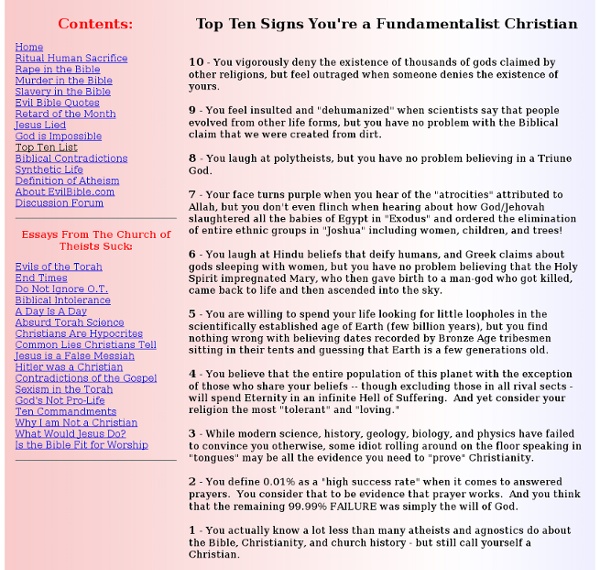 Atheism with Positivity Alberta Officials Reject Proposed Catholic Sex Ed Lessons That “Deny Science” Alberta officials deserve praise for this strong stance against harmful misinformation. Read more Meaninglessness MEANINGLESSNESS and EXISTENTIAL DEPRESSION "It is here that we encounter the central theme of existentialism: to live is to suffer, to survive is to find meaning in the suffering." - Victor Frankl Talk about it: info@livereal.com What's the point? We all get up in the morning, go to bed in the evening, eat, sleep, work, eat, sleep, and work, day after day after day, but . . .

Why Atheism? Just about everyone is an atheist when it comes to other gods — the gods that other people believe in or that nobody believes in anymore. I’m an atheist about all gods because there's no reliable evidence for any god, or even for Jesus. There is also extensive evidence that Jesus and all gods are fictional characters — myths created mainly by people who had little understanding of how our universe operates. Retard of the Month A monthly feature of the EvilBible.com web site is the award of the Retard of the Month to the person or persons who have demonstrated an exceptional level of public stupidity due to religion. Nominees must be public officials or public figures. Suggestions for future Retards of the Month can be made by e-mailing the editor at Editor(at)EvilBible.com. [Note: Due to time constraints this Retard of the Month page will no longer be updated monthly. Future retards will be selected as time allows.] The Retard of the Month for October 2006 is:

RTP - Home Page The Ragged Trousered Philosopher or 'RTP' as we are affectionately known to our friends, is an exercise in Web authorship which has been going on since 1996 (the core 'book' was started in 1986), the title of which was inspired by Robert Tressell's classic 'The Ragged Trousered Philanthropists'. But that's about as far as the resemblance goes. There is little doubt that life on Earth is headed in the general direction being painted here. How to win Rock-paper-scissors every time I admit it. When I first heard there are actual tournaments for Rock-paper-scissors, sanctioned by the World Rock Paper Scissors Society, I laughed. I mean seriously, $50k to the winner of a game that requires no skill whatsoever?

“Can’t You Atheists Keep Your Opinions To Yourselves?”—No I Cannot. Reasons Why I am Vocal about my Atheism The other day I received an email asking me why I am so vocal in my atheist and general anti-religion commentary. It was a well meant email, in that it was not full of hate speech, religious rage, etc. It concluded with the question, “From now on, why can’t we just keep our religious opinions to ourselves?”

Atheism Atheism is, in a broad sense, the rejection of belief in the existence of deities.[1][2] In a narrower sense, atheism is specifically the position that there are no deities.[3][4][5] Most inclusively, atheism is the absence of belief that any deities exist.[4][5][6][7] Atheism is contrasted with theism,[8][9] which, in its most general form, is the belief that at least one deity exists.[9][10][11] The term "atheism" originated from the Greek ἄθεος (atheos), meaning "without god(s)", used as a pejorative term applied to those thought to reject the gods worshiped by the larger society.[12] With the spread of freethought, skeptical inquiry, and subsequent increase in criticism of religion, application of the term narrowed in scope. The first individuals to identify themselves using the word "atheist" lived in the 18th century during the Age of Enlightenment. Arguments for atheism range from the philosophical to social and historical approaches.

Related:
Related:  For Verily I say unto You what God hath told me   -  Greek God and Goddesses   -  New Message from God Revelations for The World.   -  How the Desire to Find God is Written in the Human Heart   -  God   -  The Appearance and The Work of God   -  Monster God   -  Divinity.. God.. Oneness..   -  god is great   -  God and stuff   -  Bible Questions Answered   -  RELEVANT Magazine | Faith, culture and intentional living   -  Albert Hofmann Foundation   -  Hallucinogen - Wikipedia, the free encyclopedia   -  bringyou.to - Apologetics degree Resources and Information.   -  Scientific Facts in The Bible   -  A Trip to the Moon / Le Voyage dans la lune - 1902 - YouTube   -  Aretha Franklin - I say a little prayer ( Official song ) HQ version , Photos / Photoshoots - YouTube   -  Study Resources :: The Names of God in the Old Testament   -  unnamed soundsculpture on Vimeo   -  The Seven Spiritual Laws of Success by Deepak Chopra | Laws Of Vibrational Energy   -  God's Wife Edited Out of the Bible -- Almost   -  25 Life Changing Lessons to Learn from Buddha | Earth. We are one.