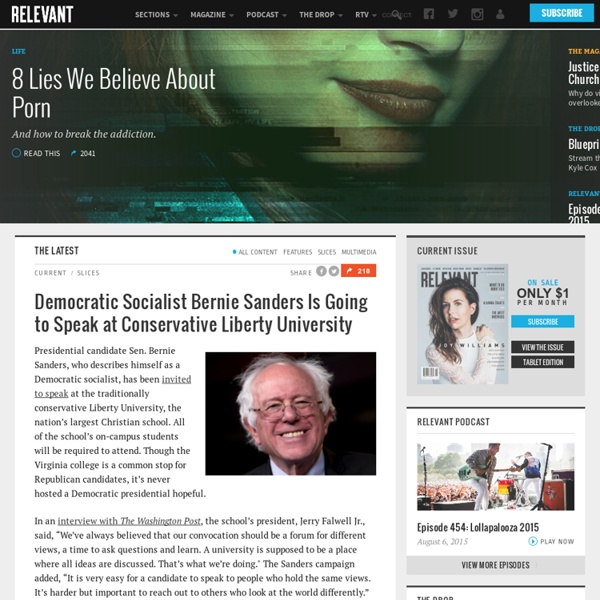 Time has released their annual list of the world's most influential people, and this year's cover went to Her Royal Highness Queen Bey, which is just one more thing to check off Miss Carter's bucket list before she hits 40. In a video on Time's website, Beyoncé said, "I feel like my mother and my daughter have probably been the most influential. And being a mother—and becoming a mother, and looking at my daughter in her eyes—made me into a woman. And made me very, very strong." The list also included Vladimir Putin, Pope Francis, Megyn Kelly, Jack Ma, Robin Wright, Rand Paul, Matthew McConaughey, Carrie Underwood, Seth Meyers, Richard Sherman, Michele Bachelet, Malala Yousafzai, Edward Snowden, Marina Abramovic, Miley Cyrus, Key and Peele and lots more. Check out the whole list here ...

Gene Edward Veith Is Bono, the lead singer and songwriter for the rock group U2, a Christian? He says he is and writes about Christianity in his lyrics. Yet many people question whether Bono is "really" a Christian, due to his notoriously bad language, liberal politics, and rock star antics (though he has been faithfully married for 23 years). But in a new book of interviews, Bono in Conversation by Michka Assayas, Bono, though using some salty language, makes an explicit confession of faith. The interviewer, Mr.

YW Lesson #27 lm1 Scripture Study I had this cute handout attached to a cellophane bag filled with Almond "joys". But forgot to take a picture. I also found this AWESOME spiritual Directory Assistance card online (on sugardoodle by Tresa Edmunds 2006) I think this was the girls favorite thing. They asked to get extra's for their friends. Johnny Webber It’s November, and Christmas is right around the corner. Luckily, I’m here to help you get your shopping done early, and there is no need to even leave your couch. Here are ten websites that aggregate useful, funny, and amazing products just waiting to be bought (Disclaimer: most of these websites run off of Amazon affiliate links, not that that affects your price in any way): 1. thisiswhyimbroke.com

Why God Doesn’t Tell You Everything… It’s Wednesday night, and I’m helping our kids get their shoes on, jackets on, and Bibles ready as we’re about to rush to church. I hustle them out the door, tell Corina we’re waiting for her in the car, and then load them into the van. Along the way, I tell Timothy (our 7-year-old): “Watch out for the puddle in the driveway. Good Friday Quotes, Bible Verses For Good Friday Good Friday takes place today, making it a great day to share Good Friday quotes and Good Friday Bible verses with others. To make that simple, HuffPost Religion collected a series of Bible verses and quotes for this Christian holiday commemorating the crucifixion of Jesus Christ. Traditions on Good Friday -- also known as Holy Friday and Black Friday -- include prayer, fasting and almsgiving. Here are 10 quotes to help commemorate Good Friday: "See, my servant shall prosper, he shall be raised high and greatly exalted." - Isaiah 52:13

Chapter 5 - Crosses churches to keep evil spirits at bay and to mark the graves of those who claimed their promise of eternal life. The main reason for the large number of variations was the use of the cross in heraldry. Heraldry was the art of creating and displaying coats of arms during the Middle Ages. THE CROSS ADORNED – A cross that is decorated with lilies or floral arrangements. This form of cross is very popular during Easter celebrations. THE CROSS AIGUISÉE (Equisée) – A cross with square endings and triangular caps.

Quotes About Bible The Bible is like the proverbial "elephant" that six blind men try to understand. Learned scholars and religious priests spend their lifetime studying the Bible. But no one can claim to know the complete truth. Brief Overview of the Bible's Storyline Dennis Bratcher * Note that the time period in which a writing is set or describes does not mean that it was written in that era. For example, Kings is a recounting of Israel's entire history in the land from the perspective of exile after the nation had been destroyed (after 586 BC).

Related:  Church
Related:  God ?   -  For Verily I say unto You what God hath told me   -  Greek God and Goddesses   -  New Message from God Revelations for The World.   -  How the Desire to Find God is Written in the Human Heart   -  The Appearance and The Work of God   -  Monster God   -  Divinity.. God.. Oneness..   -  god is great   -  God and stuff   -  Bible Questions Answered   -  Top Ten List   -  Signs Of The End | Apocalypse | Bible Prophecy Truth   -  Shamanism - Wikipedia, the free encyclopedia   -  Albert Hofmann Foundation   -  Hallucinogen - Wikipedia, the free encyclopedia   -  bringyou.to - Apologetics degree Resources and Information.   -  Scientific Facts in The Bible   -  A Trip to the Moon / Le Voyage dans la lune - 1902 - YouTube   -  Aretha Franklin - I say a little prayer ( Official song ) HQ version , Photos / Photoshoots - YouTube   -  Study Resources :: The Names of God in the Old Testament   -  unnamed soundsculpture on Vimeo   -  The Seven Spiritual Laws of Success by Deepak Chopra | Laws Of Vibrational Energy   -  God's Wife Edited Out of the Bible -- Almost   -  25 Life Changing Lessons to Learn from Buddha | Earth. We are one.