New Message from God Revelations for The World.

The New Message from God. Right-click here to download As revealed to God’s Messenger Marshall Vian Summers on April 17, 2007 in Istanbul, Turkey The peoples and the nations of the world are entering a time of grave difficulty and change. 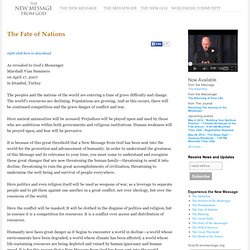 The world’s resources are declining. Populations are growing. And as this occurs, there will be continued competition and the grave danger of conflict and war. Here ancient animosities will be aroused. The Voice of the Revelation. The New Message from God. As revealed to Marshall Vian Summers on February 24, 2011 in Boulder, Colorado God has spoken again. 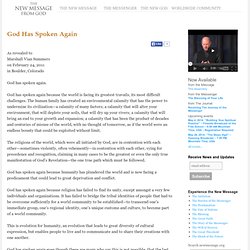 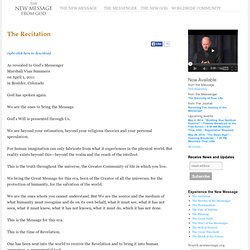 We are the ones to bring the Message. God’s Will is presented through Us. We are beyond your estimation, beyond your religious theories and your personal speculation. For human imagination can only fabricate from what it experiences in the physical world. Please view these Revelations from left to. The New Message from God. Right-click here to download As revealed to God’s MessengerMarshall Vian Summerson April 30, 2011in Boulder, Colorado [Read also the New Message Book of Prophecy] 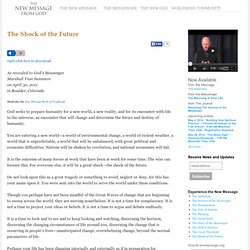 The Goal and Purpose of the Revelation. Right-click here to download As revealed to God’s MessengerMarshall Vian Summerson November 3, 2012in Kuala Lumpur, Malaysia Humanity is entering a dangerous phase in its development, a phase where it will exhaust the world’s resources in many ways, leading to economic contraction and in some places complete collapse. 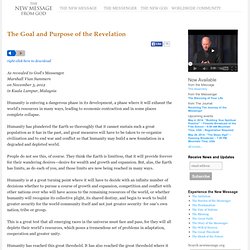 Humanity has plundered the Earth so thoroughly that it cannot sustain such a great population as it has in the past, and great measures will have to be taken to re-organize civilization and to end war and conflict so that humanity may build a new foundation in a degraded and depleted world. People do not see this, of course. They think the Earth is limitless, that it will provide forever for their wandering desires—desire for wealth and growth and expansion. This is a great test that all emerging races in the universe must face and pass, for they will all deplete their world’s resources, which poses a tremendous set of problems in adaptation, cooperation and greater unity.

The New Message from God. Right-click here to download As revealed to God’s MessengerMarshall Vian Summerson February 12, 2009in Boulder, Colorado Here the new God is the old God, unveiled and clarified. 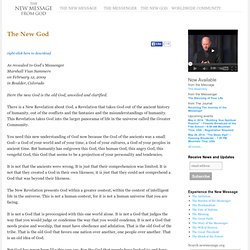 There is a New Revelation about God, a Revelation that takes God out of the ancient history of humanity, out of the conflicts and the fantasies and the misunderstandings of humanity. This Revelation takes God into the larger panorama of life in the universe called the Greater Community. You need this new understanding of God now because the God of the ancients was a small God—a God of your world and of your time, a God of your cultures, a God of your peoples in ancient time. The Race to Save Human Civilization. Right-click here to download As revealed to God’s MessengerMarshall Vian Summerson July 22, 2009in Aleppo, Syria While everything appears to be normal in these days, Great Waves of change are coming to the world—change on a level never seen before, change that will affect every person in the world. 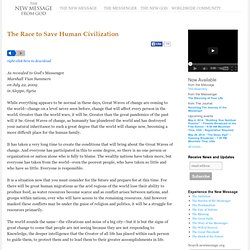 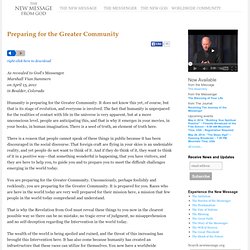 God Is Moving Humanity in a New Direction. Right-click here to download. 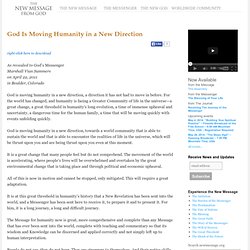 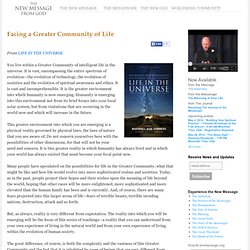 It is vast, encompassing the entire spectrum of evolution—the evolution of technology, the evolution of societies and the evolution of spiritual awareness and ethics. It is vast and incomprehensible. Entering the Greater Community. Right-click here to download As revealed to God’s MessengerMarshall Vian SummersMay 27, 2011in Boulder, Colorado God’s New Revelation opens the doors to a universe of intelligent life, providing perspective, insight and understanding never available before.

The human family does not realize its vulnerability to this Greater Community or its relationship with this Greater Community. Living in isolation for so very long, your whole notion of yourself, your notion of Creation and the Divine, are very much associated with this one world alone. Yet so many people in the world today have roots in the Greater Community, for much of their previous experience occurred there before coming into this world in this life. It is like you are an isolated tribe who has never been discovered by the outer world, not knowing the greater powers that exist around you and completely unprepared for the day when your existence would be discovered from the outside. People want many things from visitors here. Who Are the Allies of Humanity? Humanity is not alone in the universe, for the universe you will encounter is full of intelligent life. Living in a well-inhabited and long-established region of space, your world will find itself in a greater neighborhood.

Allies of Humanity Book 3, Now Available. What Will Save Humanity. Right-click here to download As revealed to God’s MessengerMarshall Vian Summerson March 30, 2008in Boulder, Colorado Humanity is about to face its greatest trial and its most difficult challenges. Many people are feeling this, of course—a vague sense of anxiety, pervasive concern over the future—while others still dream that life will continue as they have known it, only better now, for it must be better, they think.

But humanity is entering its time of great trial and difficulty. This must be accepted if you are to understand where your life is going, if you are to understand the sequence of events, if you are to understand how you must prepare for the future—a future that will be unlike the past in so many ways. Those who argue against this are perpetuating their own sense of denial, revealing their weakness and their inability to face a changing set of circumstances. You may project any ideas upon the future—your hopes, your fears, your dreams, your anxieties. The hour is late. The New Message on Religion. Right-click here to download As revealed to God’s MessengerMarshall Vian Summerson July 20, 2009in Boulder, Colorado At this time and place, it is important to speak about the purpose of religion. Religion is part of the human experience, and any attempts that have been made to eradicate it or to minimize it have proven to be unsuccessful. Nature and Natural Disasters. How God Speaks to the World.