Who Is God? Einstein letter dismissing God sells for $330,000 US - World. A letter written by Albert Einstein in which he dismissed belief in God as a "product of human weaknesses" was auctioned off Thursday for more than $330,000 US, destroying previous selling records of letters by the renowned physicist. 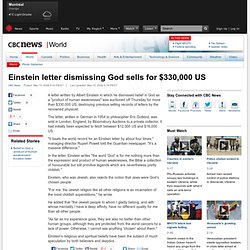 The letter, written in German in 1954 to philosopher Eric Gutkind, was sold in London, England, by Bloomsbury Auctions to a private collector. It had initially been expected to fetch between $12,000 US and $16,000 US. "It beats the world record for an Einstein letter by about four times," managing director Rupert Powell told the Guardian newspaper. "It's a massive difference. " In the letter, Einstein writes "the word 'God' is for me nothing more than the expression and product of human weaknesses, the Bible a collection of honourable but still primitive legends which are nevertheless pretty childish.

" Godchecker.com - Your Guide To The Gods. Mythology with a twist! God instructs stoner grandfather to become smelly: He avoids bathing for 37 years. Some say cleanliness is next to godliness, but not Guru Kailash Singh who quit bathing 37 years ago, because he believe he’d be rewarded for his sacrifice.Kailash, 65, a farmer from India, stopped using soap and water in 1974, after his wedding. 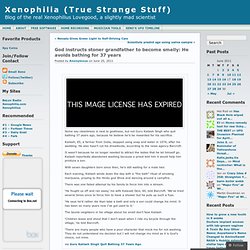 He also hasn’t cut his dreadlocks, according to the news agency Barcroft.It wasn’t because he no longer needed to attract the ladies that he let himself go. Kailash reportedly abandoned washing because a priest told him it would help him produce a son.With seven daughters born since then, he’s still waiting for a male heir.Each evening, Kailash winds down the day with a “fire bath” ritual of smoking marijuana, praying to the Hindu god Shiva and dancing around a campfire.There was one failed attempt by his family to force him into a stream.

Stephen Hawking: 'There is no heaven; it's a fairy story' A belief that heaven or an afterlife awaits us is a "fairy story" for people afraid of death, Stephen Hawking has said. 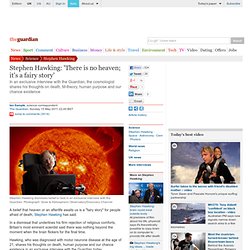 In a dismissal that underlines his firm rejection of religious comforts, Britain's most eminent scientist said there was nothing beyond the moment when the brain flickers for the final time. Hawking, who was diagnosed with motor neurone disease at the age of 21, shares his thoughts on death, human purpose and our chance existence in an exclusive interview with the Guardian today. The incurable illness was expected to kill Hawking within a few years of its symptoms arising, an outlook that turned the young scientist to Wagner, but ultimately led him to enjoy life more, he has said, despite the cloud hanging over his future.

"I have lived with the prospect of an early death for the last 49 years. I'm not afraid of death, but I'm in no hurry to die. "I regard the brain as a computer which will stop working when its components fail. The universe is governed by science. Top Ten List. God's Wife Edited Out of the Bible. - God, also known as Yahweh, had a wife named Asherah, according to a British theologian. - Amulets, figurines, inscriptions and ancient texts, including the Bible, reveal Asherah's once prominent standing. 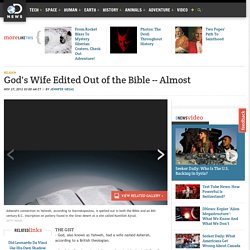 God had a wife, Asherah, whom the Book of Kings suggests was worshiped alongside Yahweh in his temple in Israel, according to an Oxford scholar. ‘God is a Myth!’ Raelian Movement launches atheistic campaign. The International Raelian Movement (www.rael.org) has just launched the next phase of its atheistic campaign by purchasing very high profile billboard space on the busy I-15 southbound freeway in Las Vegas. 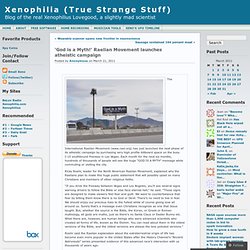 Each month for the next six months, hundreds of thousands of people will see the huge “GOD IS A MYTH” message while commuting or visiting the city.Ricky Roehr, leader for the North American Raelian Movement, explained why the Raelians plan to make this huge public statement that will possibly upset so many Christians and members of other religious faiths.

“If you drive the freeway between Vegas and Los Angeles, you’ll see several signs warning drivers to follow the Bible or else face eternal hell,” he said. “Those signs are designed to make viewers feel fear and guilt. Fantastic Beliefs. Anyone interested in the history of religions will inevitably become familiar with all manner of truly fantastic stories and beliefs. 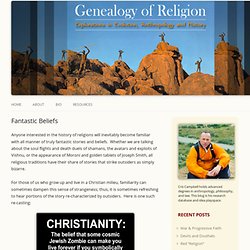 James Randi Speaks: Questioning the Bible. James Randi on God. James Randi about atheism and religion 1-2. Randi01. Get a stripped-down copy of this page. 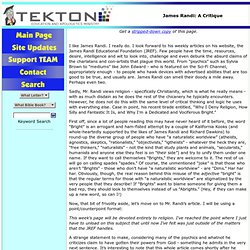 I like James Randi. I really do. I look forward to his weekly articles on his website, the James Randi Educational Foundation (JREF). Few people have the time, resources, desire, intelligence and wit to look into, challenge and even debunk the absurd claims of the charlatans and con-artists that plague this world. From “psychics” such as Sylvia Brown to “mediums” like John Edward - who is featured on the Sci-Fi Channel, appropriately enough - to people who hawk devices with advertised abilities that are too good to be true, and usually are. Sadly, Mr. Religion and Philosophy. God on Trial: The Verdict.