Resistance of Synthetic and Biologic Surgical Meshes to Methicillin-Resistant Staphylococcus aureus Biofilm: An In Vitro Investigation. Surgical meshes have become the standard procedure for a variety of surgical applications with 20 million meshes being implanted each year. 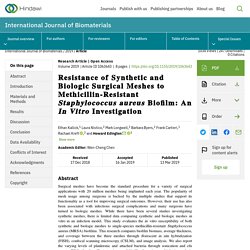 The popularity of mesh usage among surgeons is backed by the multiple studies that support its functionality as a tool for improving surgical outcomes. However, their use has also been associated with infectious surgical complications and many surgeons have turned to biologic meshes. While there have been several studies investigating synthetic meshes, there is limited data comparing synthetic and biologic meshes in vitro in an infection model. This study evaluates the in vitro susceptibility of both synthetic and biologic meshes to single-species methicillin-resistant Staphylococcus aureus (MRSA) biofilms. This research compares biofilm biomass, average thickness, and coverage between the three meshes through florescent in situ hybridization (FISH), confocal scanning microscopy (CSLM), and image analysis. 1. 2. 2.1. 2.2. Hindawi. 2014MULH5312 these KULAGA. Host response to synthetic mesh in women with mesh complications. Treatment of Biofilm Infections on Implants with Low-frequency Ultrasound and Antibiotics. 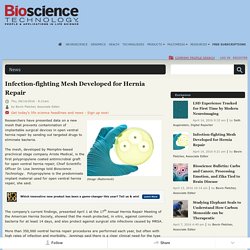 Preclinical Bioassay of a Polypropylene Mesh for Hernia Repair Pretreated with Antibacterial Solutions of Chlorhexidine and Allicin: An In Vivo Study. Abstract Introduction Prosthetic mesh infection constitutes one of the major complications following hernia repair. 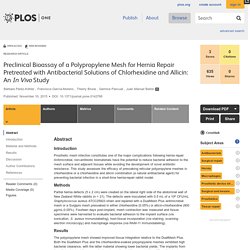 Antimicrobial, non-antibiotic biomaterials have the potential to reduce bacterial adhesion to the mesh surface and adjacent tissues while avoiding the development of novel antibiotic resistance. Direct demonstration of bacterial biofilms on prosthetic mesh after ventral herniorrhaphy. Biofilm engineer Phil Stewart continues Provost's Distinguished Lecturer Series March 8. BOZEMAN – When Phil Stewart takes stock of his career – as a researcher, educator and administrator with the Center for Biofilm Engineering at Montana State University – he sees research that opened up new terrain in the engineering world. 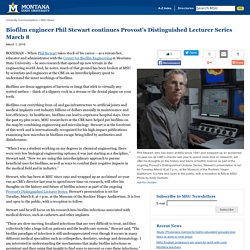 And, he notes, much of that ground has been broken at MSU by scientists and engineers at the CBE on an interdisciplinary quest to understand the inner workings of biofilms. Biofilms are dense aggregates of bacteria or fungi that stick to virtually any wetted surface – think of a slippery rock in a stream or the dental plaque on your teeth. Biofilms coat everything from oil and gas infrastructure to artificial joints and medical implants cost industry billions of dollars annually in maintenance and lost efficiency. In healthcare, biofilms can lead to expensive hospital stays. Over the past 25-plus years, MSU researchers at the CBE have helped put biofilms on the map by combining engineering and microbiology. 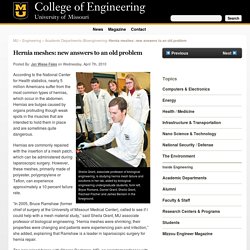 According to the National Center for Health statistics, nearly 5 million Americans suffer from the most common types of hernias, which occur in the abdomen. Hernias are bulges caused by organs protruding though weak spots in the muscles that are intended to hold them in place and are sometimes quite dangerous. Hernias are commonly repaired with the insertion of a mesh patch, which can be administered during laparoscopic surgery. However, these meshes, primarily made of polyester, polypropylene or Teflon, can experience approximately a 10 percent failure rate. “Medical device companies realize the importance of analyzing the meshes,” Grant said. “Companies are starting to listen to us,” Grant said. Baxter : Patent Issued for Method for the Improvement of Mesh Implant Biocompatibility. 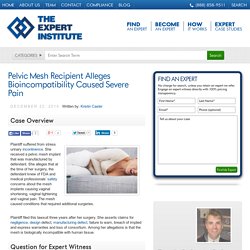 She received a pelvic mesh implant that was manufactured by defendant. She alleges that at the time of her surgery, the defendant knew of FDA and medical professionals’ safety concerns about the mesh implants causing vaginal shortening, vaginal tightening and vaginal pain. Interview with Dr. Randall Wolcott, bacterial biofilm wound specialist. Patients with diabetic neuropathy may not notice minor injuries due to loss of feeling in their lower extremities. 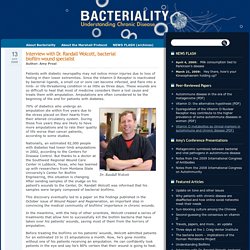 Since the Vitamin D Receptor is inactivated by bacterial ligands, a small cut or sore can become infected, and flare into a limb- or life-threatening condition in as little as three days. These wounds are so difficult to heal that most of medicine considers them a lost cause and treats them with amputation. Amputations are often considered to be the beginning of the end for patients with diabetes.

Dr. Randall Wolcott 70% of diabetics who undergo an amputation die within five years due to the stress placed on their hearts from their altered circulatory system. Nationally, an estimated 82,000 people with diabetes had lower-limb amputations in 2002, according to the Centers for Disease Control. Before treating the biofilms on his patients’ wounds, Wolcott admitted patients for an estimated 10 to 15 amputations a month. Could you explain what a biofilm is?