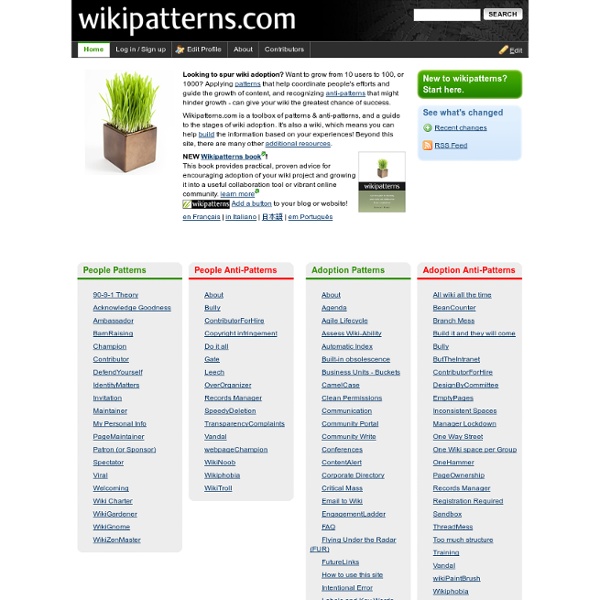 Looking to spur wiki adoption? Want to grow from 10 users to 100, or 1000? Applying patterns that help coordinate people's efforts and guide the growth of content, and recognizing anti-patterns that might hinder growth - can give your wiki the greatest chance of success. Wikipatterns.com is a toolbox of patterns & anti-patterns, and a guide to the stages of wiki adoption. It's also a wiki, which means you can help build the information based on your experiences! Beyond this site, there are many other additional resources . NEW Wikipatterns book ! Add a button to your blog or website!

Wikis Are Alive and Kicking in the Enterprise Look in the wiki! If you haven't heard that cry already, chances are you will soon, as the use of wikis in enterprise environments spreads like wildfire. Proliferating virally, wiki usage has grown exponentially in recent months, along with other consumer-centric technologies—including blogs, podcasts and RSS—that have made their way into the workplace thanks in part to the influx of the tech-savvy entry-level employees of so-called Generation Y. A wiki, which means "quick" in Hawaiian, is a Web site that enables users to easily edit and update shared content. Computer programmer Ward Cunningham originated the wiki concept and gave it its name more than a decade ago.

Sramana Mitra on Strategy » Enterprise 3.0 = (SaaS + EE) Posted on Monday, Feb 26th 2007 I have written several pieces recently about the Extended Enterprise trend, covering Segments such as Collaboration, CRM and PLM. In the same vein, that I have proposed a framework for Web 3.0 = (4C + P + VS), I would like to discuss in this piece, a framework for Enterprise 3.0. Fot those working with web technologies, and focused on business applications, the trend to watch carefully is the Extended Enterprise one, which hasn’t quite become mainstream yet. Saas (Software-As-A-Service) or OnDemand is already a well understood and accepted trend.Nick Carr wrote in November 2006: “Large companies appear to be jumping en masse onto the software-as-a-service bandwagon, according to a new survey of CIOs by management consultants McKinsey & Company. However, to come up with new ideas, or to position your existing SaaS technology on a problem that matters to customers today, I suggest, you focus on the Extended Enterprise trend.

How to web 2.0 your bank Thinking about the CMO problem at ANA, when about 5% knew about web 2.0. This begs the question of what are the implications for Banks. What specifically should a bank think about, if it wants to join the web 2.0 cool club? My belief is that there are simple staged elements that can be adopted that will engender internal confidence while producing satisfaction for customers. The definition of web 2.0 and why it matters There is only one definition, here, because O’Reilly invented it. CIOs Spurn Web 2.0 Startups - Enterprises Want Suites and Large, Forrester Research has just released two reports concerning 'web 2.0' in the enterprise. Forrester recently surveyed 119 CIOs on the topic and their answers illustrate what IT honchos want Äì and don't want Äì from social software technologies such as blogs, wikis, podcasts, RSS, social networking, and content tagging. According to the report entitled CIOs Want Suites For Web 2.0, the enterprise Web 2.0 market "is beginning to consolidate". Apparently CIOs have a strong desire to purchase web 2.0 products "as a suite, as well as an equally strong desire to purchase these technologies from large, incumbent software vendors." 61% of respondents indicated that they would prefer both a suite solution and a large, incumbent vendor.

Rough Type: Nicholas Carr&#039;s Blog: Two views of Web 2.0 in b « Deneutralizing the net | Main | Is a "neutral" net anticompetitive? » March 21, 2007 Some hard data is coming out this week on the adoption of Web 2.0 tools by companies. » The invasion of Enterprise 2.0 software Blogger and stock analyst Paul Kedrosky introduced the topic of Enterprise 2.0 at a morning workshop at the Web 2.0 Summit by trying not to define the concept, calling the definitional discussion a masturbatory exercise. Nonetheless, he offered Harvard Business School Associate Professor Andrew McAfee's definition as a starting point: Enterprise 2.0 is the use of emergent social software platforms within companies, or between companies and their partners or customers.

Dicentra spectabilis Other common names include "Dutchman's breeches", "lyre flower" and "lady-in-a-bath". Description[edit] Growing to 120 cm (47 in) tall by 45 cm (18 in) wide, L. spectabilis is a rhizomatous herbaceous perennial with 3-lobed compound leaves on fleshy green to pink stems. The arching horizontal racemes of up to 20 pendent flowers are borne in spring and early summer. The outer petals are bright fuchsia-pink, while the inner ones are white.

Collaborative Thinking: Putting Enterprise 2.0 In Perspective The two articles below are well-worth a read. I very much agree with Tom Davenport and Andrew McAfee on this point. There has been too much irrational exuberance regarding the technology associated with E2.0.