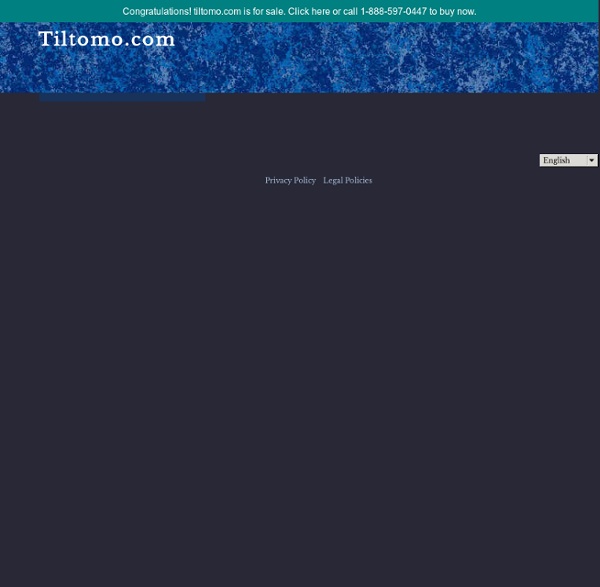 Welcome to Tiltomo. Here you can play with our Visual Search code using two sample databases from flickr. Getting started is easy, search for a tag or click random. Look for an image you like, click one of the Find Similar links under the image. You have two Find Similar modes to choose from: 1.

Why open data & the arts are natural partners #openarts - Edinburgh Festivals Innovation Lab In the run up to Culture Hackday, this is the latest post in our series on open data & the arts. Following on from Ben’s excellent introduction to what open data actually is (and isn’t), here we will start to articulate a vision for where this all might go. Clay Shirky, the renowned commentator on all things digital, has two phrases that I really like. The first is that technology doesn’t become socially useful until it becomes boring. This is patently true – while a particular technology is the latest shiny thing it will only remain the domain of early adopters and lack the ability to truly scale and create widespread impact and change.

How to Search Images Online –Search Engine Journal Image search is evolving rapidly. Today the machine understands much more about images than just a year ago: it can read the text on the image, see its colors and classify it based on its form, shape and textures. So which advanced image search methods can we use today? Image search based on image content (face / landscape / photo / product image search) Face search has been a hot topic recently.

To Tug the Heartstrings, Music Must First Tickle the Brain “The song has that triplet going on underneath that pushes it along, and at a certain point I wanted it to stop because the story suddenly turns very serious,” Mr. Simon said in an interview. “The stopping of sounds and rhythms,” he added, “it’s really important, because, you know, how can I miss you unless you’re gone? If you just keep the thing going like a loop, eventually it loses its power.” An insight like this may seem purely subjective, far removed from anything a scientist could measure. But now some scientists are aiming to do just that, trying to understand and quantify what makes music expressive — what specific aspects make one version of, say, a sonata convey more emotion than another.

Image retrieval The first microcomputer-based image database retrieval system was developed at MIT, in the 1990s, by Banireddy Prasaad, Amar Gupta, Hoo-min Toong, and Stuart Madnick.[1] A 2008 survey article documented progresses after 2007.[2] Search methods[edit] Image search is a specialized data search used to find images. To search for images, a user may provide query terms such as keyword, image file/link, or click on some image, and the system will return images "similar" to the query. The similarity used for search criteria could be meta tags, color distribution in images, region/shape attributes, etc.

Blog Archive » Measuring Innate Functional Brain Connectivity Functional magnetic resonance imaging (fMRI), a method for safely measuring brain activity, has been around for about 15 years. Within the last 10 of those years a revolutionary, if mysterious, method has been developing using the technology. This method, resting state functional connectivity (rs-fcMRI), has recently gained popularity for its putative ability to measure how brain regions interact innately (outside of any particular task context). Being able to measuring innate functional brain connectivity would allow us to know if a set of regions active during a particular task is, in fact, well connected enough generally to be considered a network. Four Powers of Maya EACH of the four Yugas, as described by the ancient Hindu sages, has a correspondence with one of the four powers of Maya, the darkness of Illusion that hides from man his Divine nature. Each Yuga brings to mankind in general an opportunity to control and understand one of these universal powers. The four Illusions, Abidyas, of Maya, counting from the grossest to the most subtle, are: This four-fold aspect of Maya is mentioned in the bible in the following passage (Rev. 4:6): "And in the midst of the throne and round about the throne, were four beasts full of eyes before and behind."

Hinduism Sacred-texts home Journal Articles: Hinduism OCRT: Hinduism Buy CD-ROM Buy books about Hinduism Vedas Upanishads Puranas Other Primary Texts Epics Mahabharata Ramayana Bhagavad Gita Vedanta Later texts Modern books The Vedas There are four Vedas, the Rig Veda, Sama Veda, Yajur Veda and Atharva Veda. The Vedas are the primary texts of Hinduism. They also had a vast influence on Buddhism, Jainism, and Sikhism. What is Kundalini Yoga? TNN Aug 26, 2010, 12.00am IST (What is Kundalini Yoga? ) Kundalini: Awakening the Serpent Power Kundalini: Awakening the Serpent Power by Georg Feuerstein Cleansing the Doors of Perception The way we see the world depends on who we are.

Buddhist Meditation in Thailand text Buddhist Meditation in Thailand Any of us have at one time or another found the toll of living in the modern world hard to bear. Stress, depression and disillusionment are some of the diseases of modern times that leave us yearning for a solution, a cure, so to speak. More and more people are turning to meditation as they fail to find the answer through worldly paths. Buddhist Meditation 120 Ways to Boost Your Brain Power - StumbleUpon Here are 120 things you can do starting today to help you think faster, improve memory, comprehend information better and unleash your brain’s full potential. Solve puzzles and brainteasers.Cultivate ambidexterity. Use your non-dominant hand to brush your teeth, comb your hair or use the mouse. Write with both hands simultaneously.