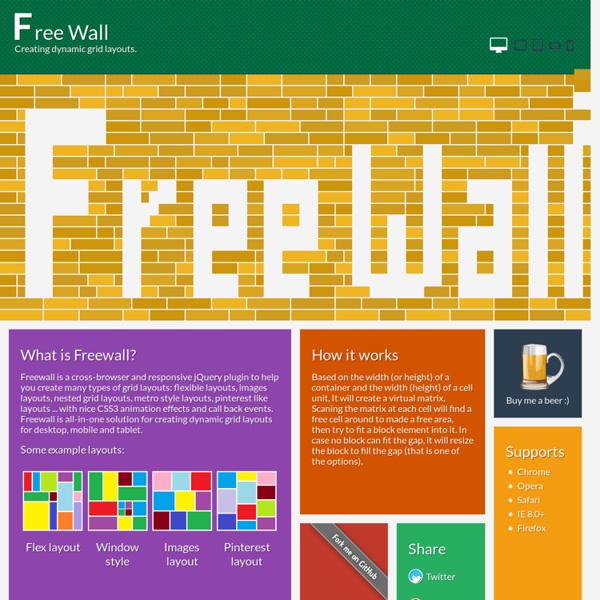 brandonaaron/jquery-mousewheel Masonry 15 Best jQuery Grid Plugins for Developers Todays requirement when designing and developing a website is based on Responsiveness, where ones website must be able to adapt and resize across all handheld devices – thus: our thinking towards a tablet – like approach must incorporate fluid and adaptive as well as responsive layouts in developing a website. Most website design today seems to rely on the Grid system and layout, which allows designers a way by which to organize content on a page, using any combination of margins, guides, rows and columns. Grid design is most commonly seen in newspaper and magazine layouts which consist of columns of text and images. The amount of grid layouts which can be created is basically limitless and can be arranged in a myriad of ways, such as : equally sized two, three and four-column grids with a header across the top, as well as a full-page grid of squares with a consistent look and feel. 1. 2. S Gallery is a jQuery image gallery plugin that displays images in a responsive grid. 3. 6. 7. 9.

gmap : Smashinglabs What is gMap? gMap is a jQuery plugin embedding Google Maps into your website. It allows you to: set center, zoom level and type of map add multiple markers with custom icons, popups and titles position marker by latitude/longitude as well as by its address set your customized map controls retrieve map object and use it for even most complex tasks Purpose of gMap is to help you keep your code clean and to create Google Map in very easy way, without learning its API. Latest stable release: 3.3.0 Donate gMap is free and will stay that way as long as I'm in charge. Social Like Smashinglabs on Facebook to get gMap updates and other JS news. Example This tiny line of code is being used to embed the map below. What has happened to V2 version? It's still available here.

QueryLoader2 – Preload your images with ease Gaya Design is back in business and hitting hard with a redo of the 2009 script QueryLoader. I kept getting e-mails and comments about it and thought I had left it just hanging there for way too long. It had become very outdated. So here it is: version 2 of QueryLoader! A direct link to the zipfile: View the example here: Reason behind v2 QueryLoader2 is a better version of the old script posted in 2009. Compatibility QueryLoader currently works in IE version 9+, Chrome, Safari and Firefox. No dependencies, so no jQuery / Zepto / MooTools needed. Example usage: Include the queryloader2.min.js script in the head section of your webpage. Create a QueryLoader2 object like this for example: Use with NPM / Browserify First install QueryLoader as a dependency in your project: npm install queryloader2 --save-dev Use it in a node / browserify project: jQuery usage Call QueryLoader in $(document).ready() like this:

jQuery Gridly Gridly is a jQuery plugin to enable dragging and dropping as well as resizing on a grids. In the example below try tapping or dragging any of the bricks. Example Add Installation To install download one of these packages and include the jquery.gridly.js and jquery.gridly.css files in your head with the following: Setting up a gridly is easy. Copyright (c) 2013 - 2014 Kevin Sylvestre Transit - CSS transitions and transformations for jQuery What about older browsers? Transit degrades older browsers by simply not doing the transformations (rotate, scale, etc) while still doing standard CSS (opacity, marginLeft, etc) without any animation. Delays and durations will be ignored. // Delegate .transition() calls to .animate()// if the browser can't do CSS transitions.if (!$.support.transition) $.fn.transition = $.fn.animate; Fallback to frame-based animation If you would like to fallback to classic animation when transitions aren't supported, just manually redefine .transitition to .animate. (Note: if you're using custom easing, you may need to also use jQuery Easing, and restrict your use of easing options to the ones defined there.) $.fx.speeds. Default duration Transit honors jQuery's default speed, $.fx.speeds. Custom easing Define custom easing aliases in $.cssEase. Webkit: prevent flickers Having flickering problems in Webkit? Antialias problems in Webkit? Force hardware-acceleration in Webkits to prevent text flickering.

Grid-A-Licious Back in mid 2008, I created a jQuery plugin. I named it Grid-A-Licious and described it as, "Divs are placed in chronological order with a special grid" because I had no clue how to explain it better. I used this script a lot and designed many sites with it during 2008. In Dec 2008, I decided to wrap the script into a Wordpress theme and release it as a christmas gift to the world. Today this floating grid layout effect is heavily used around the net and there are tons of different variations of the script to download and use. So, why am I continuing developing this? The plugin is totally rewritten and the biggest change since the previous versions of Grid-A-Licious (and other similar plugins) is that the items in the grid aren’t using absolute positioning any more. If this is something you’ve been looking for, go ahead and download the plugin and use it. width Default 225px gutter Default 20px selector Default .item animate Default false animationOption Default options below queue Default true