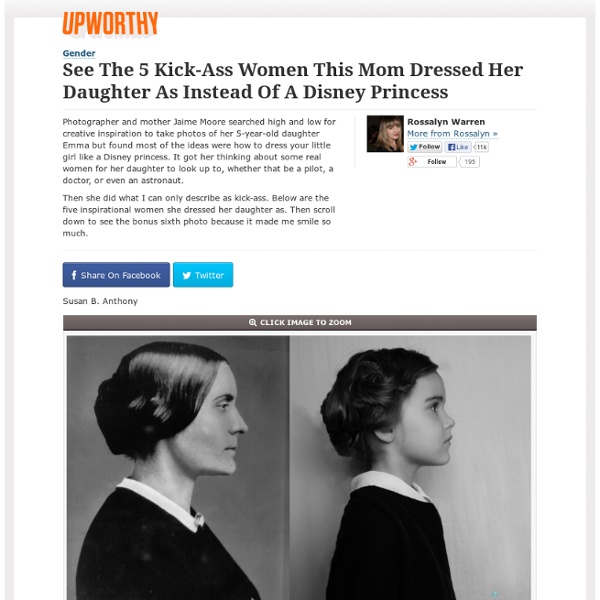 Photographer and mother Jaime Moore searched high and low for creative inspiration to take photos of her 5-year-old daughter Emma but found most of the ideas were how to dress your little girl like a Disney princess. It got her thinking about some real women for her daughter to look up to, whether that be a pilot, a doctor, or even an astronaut. Then she did what I can only describe as kick-ass. Below are the five inspirational women she dressed her daughter as. Then scroll down to see the bonus sixth photo because it made me smile so much. Susan B. Click image to Zoom Coco Chanel Amelia Earhart Helen Keller Jane Goodall The photographer's daughter, Emma. Related:  Beauty and self-image • gender

6 Ways To Invest Your Time Better (And Get More From Life) | Tangible Freedom The amount of time you have is finite. You can’t make more of it, you can’t buy more of it. But what you get out of your time, more often than not, has immense room for improvement. My 5 core principles of what makes something a good investment of time: New habits you choose to start, should meet at least 2 of the following criteria: It Contributes to personal growthIt Contributes to happines/mental well-beingIt Contributes to health/physical well-beingIt Contributes to financial well-beingIt Saves time/increases efficiency Investing money is commonplace. Because I’m not a very finance driven person, I have chosen to focus on returns as not only being money, but mental and physical health, time savings and personal growth. Let’s say you love reading. An example of the other kind, would be finding a shortcut that saves you 2 hours every week. Save Time By Saving Money You can think about investing time to save money in two ways: You reach your money goals faster. Know When To Outsource

Qué se siente cuando a uno lo retocan - BBC Mundo - Noticias Vintage Hair | 1920s 1930s 1940s 1940s 1950s 1960s Vintage Hairstyles Made Easy How to make basic vintage 1940s hair Bangs using pin curls If you are new to vintage hair styling. Rather than jumping straight into those complex setting patterns. Admittedly you can “cheat” with say using curlers or curling tongs. Most of all, it gives you the foundation and confidence to do those more complicated bangs, rolls and waves later on, that just aren't possible without pin curls. Here are some basic hair bangs for you to practise. The clean sectioning of the hair is crucial to pin curl success. 1. 2. 3. 4. 5. Fluff Bangs - Fluff out by running comb through curls. Forward Roll Bangs -Brush all the curls forward together, fang the ends under.

Mom channels iconic heroines in daughter’s photo shoot  Jaime C. Moore Emma dressed up as Amelia Earhart. You're more than a girl. That was the message one Texas mom had for her daughter when she dressed the 5-year-old up last month as iconic heroines like Amelia Earhart and Helen Keller. Jaime C. Photographer Jaime Moore has nothing against princesses, she said, but eschewed the popular Disney-themed photo shoots to encourage her daughter, Emma, to look up to real, strong women. Jaime C. “My daughter wasn’t born into royalty, but she was born into a country where she can now vote, become a doctor, a pilot, an astronaut, or even president if she wants and that’s what really matters,” the Austin-based shutterbug wrote on her website. Jaime C. “I wanted her to know the value of these amazing women who had gone against everything so she can now have everything.” Jaime C. Among the captivating shots are Emma dressed up in strings of pearls and a black hat as she channels Coco Chanel. Jaime C. In another, her hair is wrapped in a chignon like Susan B.

Why Generation Y Yuppies Are Unhappy | Wait But Why Say hi to Lucy. Lucy is part of Generation Y, the generation born between the late 1970s and the mid 1990s. She's also part of a yuppie culture that makes up a large portion of Gen Y. I have a term for yuppies in the Gen Y age group -- I call them Gen Y Protagonists & Special Yuppies, or GYPSYs. A GYPSY is a unique brand of yuppie, one who thinks they are the main character of a very special story. So Lucy's enjoying her GYPSY life, and she's very pleased to be Lucy. Lucy's kind of unhappy. To get to the bottom of why, we need to define what makes someone happy or unhappy in the first place. It's pretty straightforward -- when the reality of someone's life is better than they had expected, they're happy. To provide some context, let's start by bringing Lucy's parents into the discussion: Lucy's parents were born in the '50s -- they're Baby Boomers. Lucy's Depression Era grandparents were obsessed with economic security and raised her parents to build practical, secure careers.

tavi gevinson's blog: when i was just a little girl, i asked my mother, what will i be? I hate to be someone who apologizes for not updating their blog, but I do regret not updating as much lately because I have lots to say! Lots of ~inspiration and ideas! All this energy is going into my room, which for about three years has looked like this. Tee, gift from Sophomore. I took this picture a couple months ago, going for some Heathers/Twin Peaks vibes, but started thinking too much about how I look in it and avoided posting it for a while. First, let's talk about beauty privilege real quick, just so we're all clear and so I don't sound like a jerk: When I say good or pretty or attractive, I mean by the standards that dictate our society, which usually start with being thin and white. People who are conventionally attractive have the privilege of going through life knowing their appearance will usually not act as a barrier in accomplishing what they want to accomplish. (Educational tone over.) "To force some forever identity on other people is stupid. She has a point!

20+ Incredible Lip Art Examples Below you will find a collection of creative lip art examples, all of which display a wide variety of techniques, colors and expertise. Of course, you won't find people walking around the streets with lips similar to the examples below but heck it would look awesome. If you have come across any other examples, let me know in the comment area as I would love to see them! Source International Women's Day 2014: The shocking statistics that show why it is still so important - World - News The earliest Women’s Days were held in the first decade of 20th century. This was before women had the vote, before women could legally terminate a pregnancy. In the UK, it was only ten years since a married woman could legally own her own property, rather than be property herself. More than a century later and it’s tempting to see International Women’s Day as redundant, a celebratory event at best. Loading gallery Feminist quotes from the icons to inspire you 1 of 30 International Women’s Day is still needed to motivate change, at home and abroad. Violence Globally, about one in three women will be beaten or raped during their lifetime. On average, 30% of women who have been in a relationship report that they have experienced some form of physical or sexual violence by their partner. 38 per cent of all murders of women worldwide are committed by a woman's intimate partner. A UN report said 99.3% of women and girls in Egypt had been subjected to sexual harassment. Female Genital Mutilation