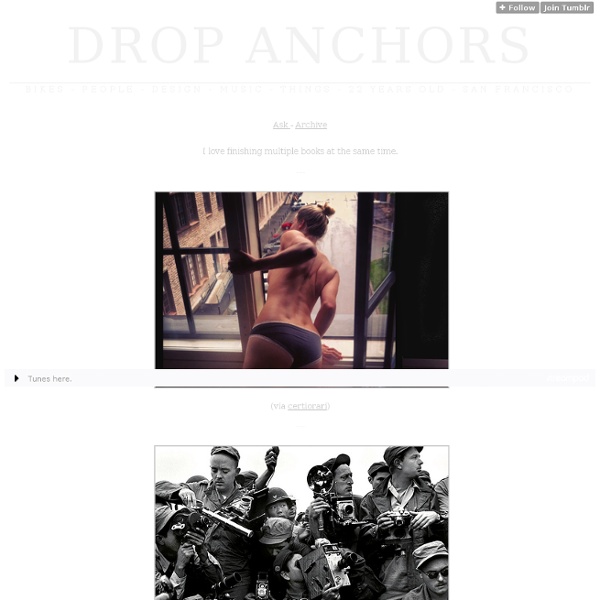 Curved White Giant Puffball Take a look at TMB p/b Equator’s new website! I have assumed a new role on the team: Blog Coordinator or Blog Media Manager or Director of Social Media - Blog Division or something. In doing so I have been editing and posting my teammates’ thoughts and reports. It would make me proud if you checked in every now and again for some roadie news. Visit here! gluing, taping, packing, cutting, measuring, drying, unscrewing… Lakes Basin, Sierra Nevada

FlakPhoto.com | Photography Online Prolly Is Not Probably fuck you very much Macaframa jolly ho pip pip * MASHSF * Beautiful Black and White Photography - Smashing Magazine Advertisement Today, in the era of digital technology black and white often awake nostalgic feelings of the 20th century, the good old times when the television was just invented, when people read colorless printed newspapers and when people were just imagining cell phones equipped with photo cameras. But still, dozens of years later, many artists still use black and white photography for artistic purposes. It is one of the best and cheapest types of photography for the beginners to test their creativity. This showcase is a tribute to this often forgotten and underrated art of photography. In this post we present beautiful examples of black and white photography — an update to previously featured showcase of black and white photography. Beautiful Examples of Black and White Photography Milo Alterio Emir Ozsahin danielsantiagosalguero Philipp Klinger Simon Pais-Thomas Aneta Kowalczyk Running Nowhereby Julien Legrand MustafaDedeogLu Elliott Erwitt MisterKey Andrey Vahrushew Let it Snowby WWWest Drooper

Bike Snob NYC Awesome Random Inspirations by paul0v2 Mon, 04/26/2010 - 11:54 Sometimes we seek an exactly type of inspiration like web inspiration for example but there are times where the unexpected can do some good for your brain. This collection is full of great images that are quite unexpected and pretty awesome at the same time, so what you waiting for? Check them out! Metroplastique