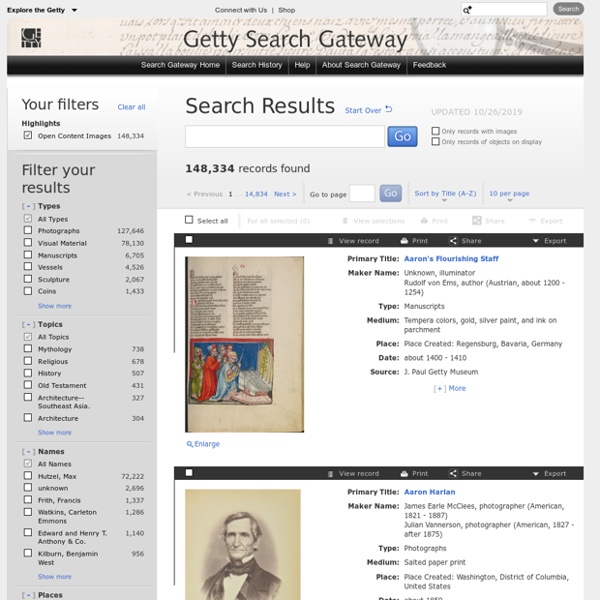 9 of the Strangest and Loveliest Dioramas Ever While there are endless different kinds of dioramas, there is something that most all of them have in common: the strange beauty that comes from capturing our world in miniature, in exacting detail. Some of the most impressive examples of this craft are on display in museums around the globe, while others a bit more off the beaten path. From bizarre to beautiful, here are nine places to see these intricate three-dimensional snapshots of the world. 16 Miles of String - Andrew Russeth: Arte Povera is Everywhere (in Chelsea) Mario Merz, Le case girano intorno a noi o noi giriamo intorno alle case?, 1992, at Gladstone Gallery. Mario Merz has some huge works up at Gladstone Gallery. Michelangelo Pistoletto just finished his first show at Luhring Augustine.

Public Domain Collections: Free to Share & Reuse That means everyone has the freedom to enjoy and reuse these materials in almost limitless ways. The Library now makes it possible to download such items in the highest resolution available directly from the Digital Collections website. Search Digital Collections Resources for Artists: Public Domain Images From the Book Infant's Cabinet of Birds & Beasts - elusivemu.se Elusive Muse is pleased to present a few pages from the public domain book, Infant’s Cabinet of Birds & Beasts. For the rest of these illustrations or for even more public domain resources, drawing references and collage fodder join our special facebook group, MUSE STUDIO where we feature an extensive library of reference material for artists.

Images - Clip Art, Photos, Sounds, & Animations Insert clip art In the newer versions of Office, there's no longer a clip art library, but Office still helps you insert clip art. STEP 1: Select Insert > Online Pictures (In Outlook, when you're using the Reading pane, there isn't an Insert menu. The Trump Resistance Plan: A Timeline – Russia and President Trump Of the Jan. 6, 2017, meeting, when Comey told Trump about the infamous Steele dossier, Trump said: “He shared it so that I would think he had it out there” as leverage against Trump. Of the Feb. 14, 2017, meeting, when Trump said he hoped Comey could see his way to “letting Flynn go,” Trump said: “He said I said ‘hope’ — ‘I hope you can treat Flynn good’ or something like that. I didn’t say anything.

"It's all Greek to me" in 30 languages - Thought - The Forum of European Citizens In France thanks to the studies of Henriette Walter, linguist, we know that there are 2 roots between french and greek languages. One is very old, from greek > latin > french ; the other one is still living, concerns new scientific words for which very often the greek roots are used as bricks, like in the german language for himself. So, in a 21th century very technologic, French will not end to be closely linked to Greek. The same indicates that among current 10.000 to 15.000 words, French received in fact two major impressive imports from others languages.

Millions of historic images posted to Flickr by Robert Miller, Global Director of Books, Internet Archive “Reading a book from the inside out!”. Well not quite, but a new way to read our eBooks has just been launched. Check out this great BBC article: Resources for Artists: Public Domain Images From the Book The Fairy Tales of the Brothers Grimm - elusivemu.se Elusive Muse is pleased to present a few pages from the public domain book, The Fairy Tales of the Brothers Grimm. For the rest of these illustrations or for even more public domain resources, drawing references and collage fodder join our special Facebook group, MUSE STUDIO where we feature an extensive library of reference material for artists.

Royalty-free Sounds - Richard Byrne The Free Music Archive provides free, high-quality, music in a wide range of genres. The content on Free Music Archive is used under various creative commons licenses. The New York State Music Fund provided initial funding for FMA. 15 Famous Sculptures in History click 2x Lincoln Memorial, designed by Daniel Chester French & carved by the Piccirilli Brothers (1920) Originally designed to be 10 feet tall, this marble sculpture of the 16th president of the United States was enlarged to 19 feet from head to foot. It depicts Lincoln in contemplation, sitting inside the majestic temple structure that forms the rest of the Lincoln Memorial. From the 1930s, the space has gained importance as a symbol of race relations in the United States. Bird in Space by Constantin Brancusi (1923)

Armen Avanessian/Alexander Martosin collaboration with Christopher Roth Armen Avanessian * 1973 in Vienna, lives and works in Berlin Alexander Martos * 1972 in Vienna, lives and works in Vienna In collaboration with Christopher Roth DISCREET – An Intelligence Agency for the People is described by Armen Avanessian and Alexander Martos as a para-agency modeled on existing secret services. During a three-week residency at the 9th Berlin Biennale, renegade experts from the fields of the arts, theory, technology, politics, law, hacktivism, and finance analyze and rework some of the core codes of the twenty-first century.

Partners The Museum of Online Museums (MoOM) Exceptional exhibits are highlighted each quarter. Selections from previous seasons are archived here. Please consider joining our MoOM Board of Directors won't you? You'll receive some nice swag and can lord it over your less civic-minded friends.