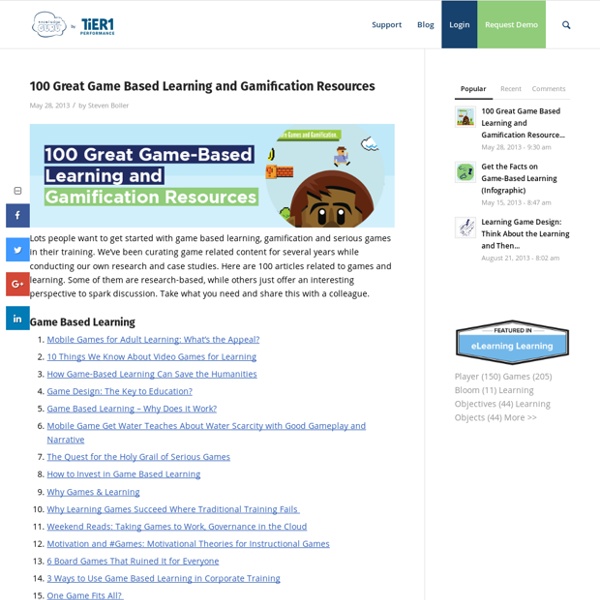 Computer games and learning handbook Aimed at teachers and those interested in using games with an educational intent, this handbook aims to provide some useful anchoring points for educators to make sense of the area and to develop practical approaches to the use of computer games as a medium for learning. It is assumed by some that the models games employ lead to learning, as young people effectively learn how to play without necessarily being explicitly taught, doing vast amounts of reading or interacting with others; while others see games as boring, tedious, time-consuming, and repetitive. Both of these viewpoints can be true: as stated the impact of a game is dependent on the game itself, but also the player, circumstance of use, mediation of the teacher and other players. In fact, many academic researchers of young people’s uses of digital media argue, counter to the hype, that computer games have been insufficiently well researched as a medium for learning.

PeaceMaker - Play the News. Solve the Puzzle. PeaceMaker: Play the News. Solve the Puzzle. For the latest news on PeaceMaker version updates and patches, check this post on our blog. About the Game PeaceMaker is inspired by real events in the Israeli-Palestinian conflict.Be a leader and bring peace to the region before your term in office ends. PeaceMaker is two games in one: play both the role of the Israeli Prime Minister or the Palestinian President.Play the news: how would you react to the events in the Middle East presented using real news footage and images?

edutopia Often when I look at how to help students, I think back on my own journey as a student. When challenged to teach students to trust that the effort of persistence is worth it, I think back on when I myself figured it out. And do you know what I came up with? Serious games examples that explain all you need to know At first sight, putting words like “serious” and “game” together might seem impossible, but it’s not. In recent years, serious games have proven that it is possible to learn while you play. This teaching method is known as game-based learning, a trend that’s expanding at the speed of light in primary schools, prestigious universities and large corporations.

10 PowerPoint Games – tekhnologic There are several benefits to using PowerPoint games in the classroom. They provide an opportunity to model an activity or a game (especially with large classes), they can be fun to play, they are easy to create or edit and they don’t require an internet connection. Since tekhnologic started over two years ago, I have shared several PowerPoint games that I have created. Now, as 2016 draws to a close, I wanted to put together a bumper pack of PowerPoint games to thank everyone who has been following this blog. You’ll find a few some new games as well as some old favorites. I hope you will enjoy playing them.

Making Games: The Ultimate Project-Based Learning Part 6 of MindShift’s Guide to Games and Learning. As game-based learning increases in popularity, it’s easy to get pigeon-holed into one particular way of thinking about it or one way of employing it. This is true regardless of how teachers feel about gaming in the classroom, whether they’re for or against it. One common objection to game-based learning is that students will sit in front of screens being taught at. Sure, games are interactive, but on some level, don’t they still just replace the sage on the stage with the sage on the screen?

A Wonderful Tool to Help Students Easily Design Their Own Games October 12, 2015 Gamestar Mechanic is a gaming platform where students grades 4 to 9 get to learn how to design their own games using the learning principles of game design. Gamester Mechanic features three main components to engage students in game-based learning: the Quest, Workshop and Game Alley. In the Quest, students get to interact with challenging games and get help from a budding game designer character who will walk students through the core principles of game design. AWS Certification Online Course in India Learn Amazon Web Services Online Training Amazon Web Services (AWS) is a far-reaching, developing distributed computing stage given by Amazon.com. Web administrations are some of the time called cloud administrations or remote figuring administrations. The main AWS offerings were propelled in 2006 to give online administrations to sites and customer-side applications. An Amazon Web service describes both technology and company. The company Aws is a subsidiary of Amazon.com and provides on-demand cloud service platform to both individuals, companies, and governments on a free subscription basis for 12 months.Aws provides more than 70 services spanning a wide range include Compute, Storage, Networking, Database, Analytics, Application services.

5 Ways to Take Some of the Distance Out of Distance Learning in Middle and High School Teachers understand the importance of physically being in the student space of the classroom. It’s essential for engaging students who are off track, for making specific points, and for energizing already on-task learners. But how can we connect with students when we’re separated by either a computer screen or the physical barriers we currently need to keep everyone safe in the classroom? The following are five ideas we’ve tried this year with middle school and college students—they should also work with the high school students in between. 1. Be Dramatic—Shout and Whisper