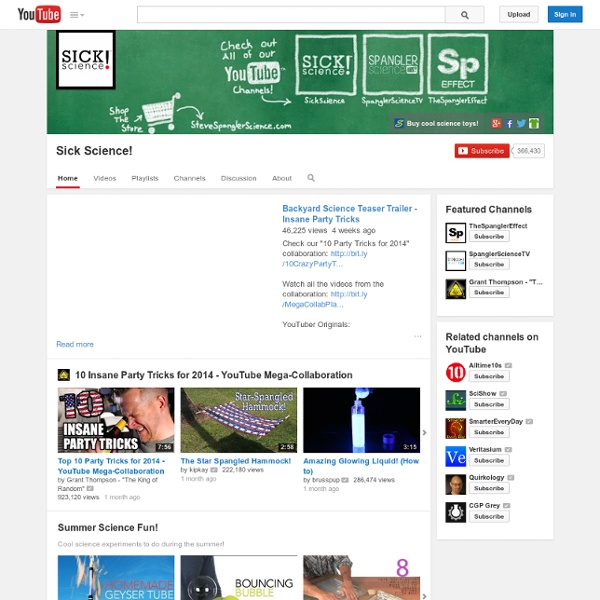 GET THE KIT HERE: http://www.stevespanglersci... Click here to get the secret: http://www.stevespanglersci... Density can be a difficult scientific property to grasp, that's why we like making it colorful, fun, and (most importantly) simple! The Salt Water Density Straw is the epitome of kitchen science. You'll use materials are right in your house, and with just a bit of salt, you'll create a colorful experience that will have young scientists understanding density in moments. Want more experiments like this?

SmarterEveryDay Twitter SmarterEveryDay Loading... Ideas - TREEFINDER My subversive attempts to do something useful. The Rotary Piston Array Machine -- Air-Sea Temperature Difference Engine -- Solarthermal Power Generator The Rotary Stirling Engine The Wave Pump Heat Engine With No Compressor Portable Tent Platform The rotary piston array (RPA) is the possibly most compact and most elegant machine to transform the volumetric change of gas into shaft work and vice versa. It can be used as pneumatic motor, steam engine, gas compressor, vacuum pump and the like, but also as part of new heat or combustion engines which – like the Stirling engine – open new ways to harvest renewable energy. Other possible uses are refrigeration and air-conditioning. The idea has been overlooked for at least 110 years, as some old patents indicate, and it seems to have been reinvented several times (e.g.

HomeschoolScientist Upload TheHomeschoolScientist.com Subscription preferences Big Think There are only two events in the universe that defy the laws of physics: black holes and the big bang, and while scientists try to explain them, crucial evidence may be eaten up in the meantime. Christophe Galfard's book is "The Universe in Your Hand A Journey Through Space, Time, and Beyond" ( Read more at BigThink.com: Follow Big Think here:YouTube: storybots The StoryBots travel to the Land of the Lymph to learn how a cold virus spreads, how the immune system in our bodies fights viruses, and what we can do to stay healthier. (Wash your hands!) SUBSCRIBE: About Netflix Jr.:Welcome to the official Netflix Jr. channel! Where kids can learn, sing and play with their favorite Netflix characters - from StoryBots to Super Monsters and everyone in between.