Getting started with "Getting Things Done" 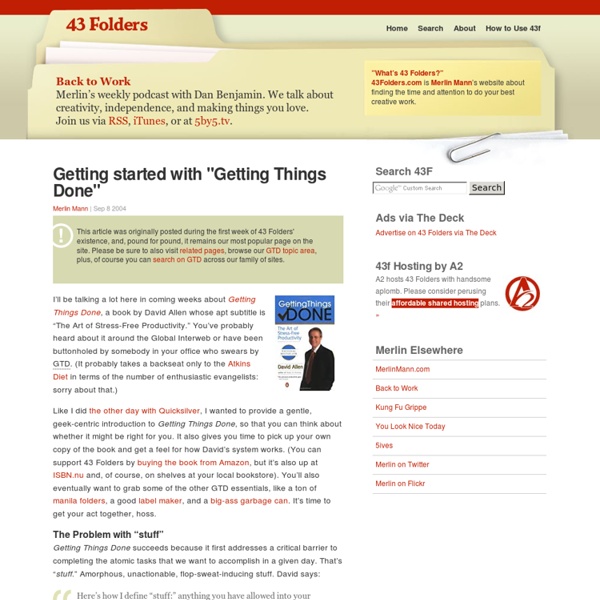 This article was originally posted during the first week of 43 Folders' existence, and, pound for pound, it remains our most popular page on the site. Please be sure to also visit related pages, browse our GTD topic area, plus, of course you can search on GTD across our family of sites. I’ll be talking a lot here in coming weeks about Getting Things Done, a book by David Allen whose apt subtitle is “The Art of Stress-Free Productivity.” You’ve probably heard about it around the Global Interweb or have been buttonholed by somebody in your office who swears by GTD. (It probably takes a backseat only to the Atkins Diet in terms of the number of enthusiastic evangelists: sorry about that.) Like I did the other day with Quicksilver, I wanted to provide a gentle, geek-centric introduction to Getting Things Done, so that you can think about whether it might be right for you. The Problem with “stuff” Stuff is bouncing around in our heads and causing untold stress and anxiety. GTD is geek-friendly

Related:  an even BETTER VERSION of yourself • GTD • Organising tools

Getting Things Done The GTD method rests on the idea of moving planned tasks and projects out of the mind by recording them externally and then breaking them into actionable work items. This allows one to focus attention on taking action on tasks, instead of on recalling them. First published in 2001, a revised edition of the book was released in 2015 to reflect the changes in information technology during the preceding decade and incorporate recent scientific research supporting the system's claims regarding how the mind functions.[2] Themes[edit] Allen first demonstrates stress reduction from the method with the following exercise, centered on something that has entered your life that has an unclear outcome or where the next action is not defined. (Allen calls these sources of stress "open loops," "incompletes," or "stuff.")[1]:13

7 Secrets of the Super Organized A few years ago, my life was a mess. So was my house, my desk, my mind. Then I learned, one by one, a few habits that got me completely organized. Am I perfect? Of course not, and I don’t aim to be. How Seinfeld’s Productivity Secret Fixed My Procrastination Problem I’ve long been overwhelmed by an unwieldy list of goals that would sit, unaccomplished, in a long-term to-do list year after year. Then I came across a simple trick that solved my chronic problem. As gimmicky as it may sound, I’m now accomplishing everything I’d been putting off in just an hour a day. Here’s how you can, too. Yes. Another Backup Lecture. Daring Fireball: An Ode to DiskWarrior, SuperDuper, and Dropbox Hard drives are fragile. Read as much as you can bear to about how they work, how incredibly precisely they must operate in order to cram so many bits onto such small disks. It’s a miracle to me that they work at all. Every hard drive in the world will eventually fail.

GTD Toolbox: 100+ Resources for Getting Things Done Getting Things Done, also abbreviated as GTD, is a popular time management productivity method created by David Allen. The method is just as popular today as it was back in 2007 when we ran our GTD Ninja post featuring more than 50 apps to help you be more productive and organized. But there are a host of new applications out there to help you be even more productive this year. Below are more than 100 of them. What are your favorite GTD tools?

29 Ways to Beat Procrastination Once and For All We all procrastinate. Sometimes it’s not a bad thing, but it can turn into something evil and nasty if we aren’t careful. Try these procrastination beating techniques to destroy this deadly foe once and for all. 1. Get up and move One of the best ways to “change the channel” of procrastination is to change your scenery. as a low effort GTD tool « Licorize' Blog Licorize is not associated in any form with Mr. David Allen or its company, When referring to the GTD book, we will refer to Piatkus edition 2009. Here we consider Licorize as a tool which can help in using the Getting Things Done methodology. We also briefly introduce the methodology. Getting Things Done, also abbreviated as GTD, is a popular time management productivity method created by David Allen.

Five Ways to Become Happier Today Transcript Question: What can people do each day to be happier? Tal Ben-Shahar: The first thing to do to become happier, paradoxically, is to accept painful emotions, to accept them as a part of being alive. You know, there are two kinds of people who don't experience painful emotions such as anxiety or disappointment, sadness, envy; two kinds of people who don't experience these painful emotions. They are the psychopaths and the dead. Hipster PDA Although it began as a joke, or perhaps a statement about technology fetishism, the Hipster PDA has rapidly gained popularity with serious users,[4] with hundreds posting pictures of their customized hPDAs on photo sharing sites and exchanging tips on Internet mailing lists. Advocates of the hPDA claim that it is a cheap, lightweight, freeform organizer[5] that doesn't need batteries and is unlikely to be stolen. Enthusiasts also design and share index-card-size printable templates for storing contacts, to-do lists, calendars, notes, project plans, and so on. A Hipster Nano PDA utilizes business cards with blank backs and one that has a calendar on the back.

5 Time management tricks I learned from years of hating Tim Ferriss I have hated Tim Ferriss for a long time. I have hated him since we both had editors at Crown Publishing who sat next to each other and I heard how difficult he is. I didn’t blog about it because first of all, I’m sure the buzz about me is that I’m difficult, too. And also, his book, The 4-Hour Workweek, was a bestseller and mine wasn’t. Guest Post: How To Hack Your Environment For Maximum Learning This guest post was written by Andrianes Pinantoan. Andrianes is currently studying a TAFE course to be a freelance writer. When not working, he can be found with a camera in hand. You can find him on Google+. Back when I was in secondary school in Singapore, the usual place students went to study was McDonald’s. 2 years after I graduated from secondary school, a roommate of mine told me that “the place to study in” was the airport. You might think that as long as you qare studying, it doesn’t matter where you do it, but your learning environment actually plays a huge role in your learning efficiency and effectiveness.

How to Do What You Love January 2006 To do something well you have to like it. That idea is not exactly novel. We've got it down to four words: "Do what you love." But it's not enough just to tell people that. How to be more interesting to other people...lol For a while, I was a visual artist. Well, sort of. I mean, I made money from it.