How to Organize Evernote for Maximum Efficiency 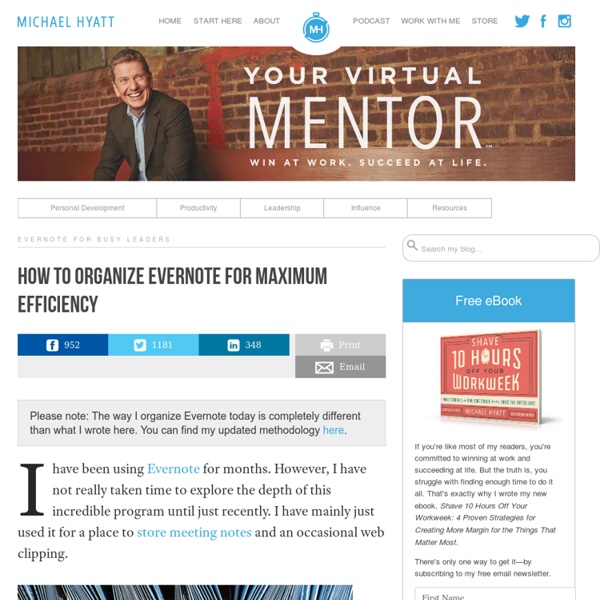 Please note: The way I organize Evernote today is completely different than what I wrote here. You can find my updated methodology here. I have been using Evernote for months. However, I have not really taken time to explore the depth of this incredible program until just recently. Photo courtesy of ©iStockphoto.com/STEVECOLEccs However, thanks to Brett Kelly’s very helpful e-book, Evernote Essentials, the Evernote user forum, and a little experimentation, I have begun to see the incredible power of this digital repository. It all begins by establishing a solid organizational structure. If you are just getting started with Evernote, I suggest that you buy Brett Kelly’s remarkably practical e-book, Evernote Essentials, 4.0. First, let’s define some terms: Notebooks: These are collections of individual notes. I tend to think of stacks and notebooks as a vertical (or hierarchical) way of organizing, and tags as a horizontal (or lateral) way of organizing. Here are my current tags: Related:  GTD

The Item Hierarchy in v0.8 Parents and children When we want to get something done - like, say, get a web-package to manage my task list - then usually I can't do it in one action: it gets broken down into several tasks. So, I create a project "get a web-package to manage my task list", and then I set out what the very next thing I have to do, to start making that happen: "search web for existing GTD software". That's a next action, and the sole reason I'm doing it is to get one step closer to making the project happen. A lot of the things I do are very specific, with a definable completion status - they are projects. A description of the hierarchy In 0.8, the hierarchy of projects and actions that form the core of the GTD productivity system, has been extended as follows: Values -> Vision -> Roles -> Goals -> Projects -> Actions This is a synthesis of the hierarchy set out in Covey (needs reference) , with the runway-50,000ft analogy set out in the GTD book. For these four categories: You can use it as you see fit.

Outlook 2010: Mail Alert Notification From Specified Sender Undoubtedly Desktop Mail Alert Notification is a great feature of Outlook 2010, but it happens sometime that you don’t want to be buzzed every time a new email arrives in your Inbox, and only need to be notified when a mail is received from specified persons. So if you have been on the look out for a way to alert you on specific emails only, then this post may help. Launch Outlook 2010, on the File menu click Options, and navigate to the Mail option in the left side column, under the Message Arrival section. Uncheck Display a Desktop Alert. This will disable all the desktop alert mail notifications. Switch to Home tab, select the mail from the specific sender on which you want active mail alert notification, and from the Rule drop-down button, click Create Rule. You will reach Create Rule dialog, click Advance Options. From Rules Wizard, enable the specific sender checkbox on which you want to activate desktop alert notification, and Click Next. Advertisement

How to Get Your Stuff into Evernote It is no secret that I am a big fan of Evernote. It is one of those amazing tools that can radically boost your productivity. I use it probably more than any other program other than Mac Mail. It has enabled me to realize my dream of a paperless office. But Evernote can also be initially intimidating. If you are just getting started with Evernote, I suggest that you buy Brett Kelly’s remarkably practical e-book, Evernote Essentials, Second Edition. Now, after several months of really exploring the program, I have discovered ten different tools for getting my content into Evernote: Type It. Record it. You don’t have to use all of these techniques, of course. Question: Which of these tools do you find yourself using the most? Want to launch your own blog or upgrade to self-hosted WordPress?

Time management systems - how to choose from the leading systems. Time Management Systems - There are many time management systems available today. An effective system is a key part of getting control of your time. Most people need some sort of a system to save time and make time -- because it is pretty much impossible to keep it all in your head.We like to save you time so we have summarized the key aspects of some of the leading systems available. The Systems we have selected for this overview are: Getting Things Done - GTD - David Allen Time Management Franklin Time Management -- Fraklin Covey Time Power -- Brian Tracy Time Managament from the Inside Out -- Julie Morgenstern Firstly lets look at why you should consider using a System at all. The idea of a System is that it captures all key information. Next we move on to what we suggest you look for as a starting point for your System. Look for a System that includes: 1. Please note, that we are talking about a system here, not a planner or diary. So, we have summarised 4 leading systems for you.

How To Encrypt Evernote On Mac OSX In yesterday’s post, we discussed how to encrypt your Evernote database on Windows. Today, we will be going through how to do the same thing using Mac OSX. Unfortunately it is slightly more cumbersome, but it is certainly do-able. Encrypting Text Inside A Note The “official” way to do encryption in Evernote is to simply encrypt any sensitive text in a note. This is easily done in the Evernote UI Step 1: Select the text you want to Encrypt. Step 2: Right-click (or Command-Click) and choose Encrypt Selected Text. Step 3: Make up a passphrase that you will later use to decrypt this text. Step 4: Your text will now show as encrypted in Evernote. Encrypting Your Evernote Database Here is where things get fun. What is an encrypted sparsebundle? When you read this it might look kinda technical, but its not that bad. Note: You are going to be be moving around your Evernote files. Step 1: Click on Applications, then Utilities and choose Disk Utility Step 2: Go to File, then New then Blank Disk Image

GTD in 15 minutes – A Pragmatic Guide to Getting Things Done GTD—or “Getting things done”—is a framework for organizing and tracking your tasks and projects. Its aim is a bit higher than just “getting things done”, though. (It should have been called “Getting things done in a much better way than just letting things happen, which often turns out not to be very cool at all”.) Its aim is to make you have 100% trust in a system for collecting tasks, ideas, and projects—both vague things like “invent greatest thing ever” and concrete things like “call Ada 25 August to discuss cheesecake recipe”. Sound like all other run-of-the-mill to-do list systems, you say? One of the basic assumptions of GTD is that you are dumb—or, rather, that your subconsciousness is quite dumb when it comes to thinking about things you should have done. Jessica Kerr put it perfectly: Pretend your brain is a white board. A great part of the “magic” is to convert both tasks and whims into physical and visible actions as you soon will see. Awesome! Agenda contexts But… why‽

Ruud Hein »  Evernote GTD How To The following 15 minute setup enables you to use Evernote as a frictionless GTD list application. Easy entry, no multiple notebooks required. Works with you, not against you. The setup features: notebook independent setup: enter and use to do notes anywhere, anytimeProject Listlist aggregating all next actions@ context listsWaiting ForSomeday/Maybe5 “time required” levels & listsdone/audit listtoggle checkbox (/tag) to move items on/off the Someday/Maybe list The description is for an oldÂ Windows desktop client, Evernote 3.1, but works anywhere Evernote does. How It Works You tag Evernote To Do items — those are the ones where you insert a checkbox — with your context(s) and (optional) a time estimate (5, 15, 30,45 or 60 minutes). Saved Searches make these items show up on your @ context list(s), on your Project list when tagged with @project, on Someday/Maybe when tagged with sd — and on one of your time lists if you added that info as a tag. Setting Up Your Saved Searches @ Projects …but…

Scanning documents and notes directly to Evernote with a Canon MP Series printer | Tech and life You don’t have to scan documents to your PC then save them into Evernote organizer in two stages, you can set up your printer/scanner to scan directly into Evernote. I’ve already posted about scanning directly to Evernote with an Epson Perfection 4180 scanner. I recently got a Canon MP series multifunction printer with built in scanner (MP280) and had no trouble setting it up to scan directly to Evernote. Here’s what you do. When you installed your Canon printer drivers and utilities on the CD which came with the printer, you would have installed MP Navigator, the application which, among other things, allows you to scan directly to an application, in our case Evernote. Switch on your printer and place a test sheet on the scanner tray. For me it was actually called MP Navigator EX 4.0 but you may have a different version. Click on Custom and that should open a box like below. This is the part where we select Evernote as the program we want to open the scan with.

Org Glossary: An Explanation of Basic Org-Mode Concepts One of the most common questions for new (and seasoned) users of org-mode is how to organize agenda files. Should you put everything in one big file organized by project? Should you create a new file for each project? Or should you have separate "containers" for different types of data: i.e., one file (or subtree) for appointments, one for reference, one for todos, and so on. The short answer: it doesn't matter. If you are using org-mode for the first time, the simplest approach may be to use a single file and to enter projects or todos as the appear. Perhaps the main consideration in organizing your files is to consider inheritance and restriction. An example: If you'd like all your appointments to belong to the category "appts", then it probably doesn't make sense to scatter them as first level headings among multiple files.

What is Muda? « « Eliminate The Muda!Eliminate The Muda! The concept of Muda [mÅÅda] and its elimination is one of the core principles integral to Getting Rich Living Lean. The core principles of a getting rich living lean and its cousin Lean Management have been in existence for decades, mostly in the form of a philosophy of business management and made famous by a book called The Machine That Changed the World by James P. Womack, Daniel T. The Machine That Changed the World illustrated how the strategies of associate education, efficient production and a constant focus on continuous improvement enabled the Toyota Motor Corporation to grow from an insignificant local automobile producer in Japan in the early 50′s to the industry leading global company that it is today. Simply put muda is waste. Muda is a Japanese word for waste. Every action, step or process in a business and in your life can be categorized in one of three ways. From a business’ perspective, value-added is the stuff a customer is willing to pay for.