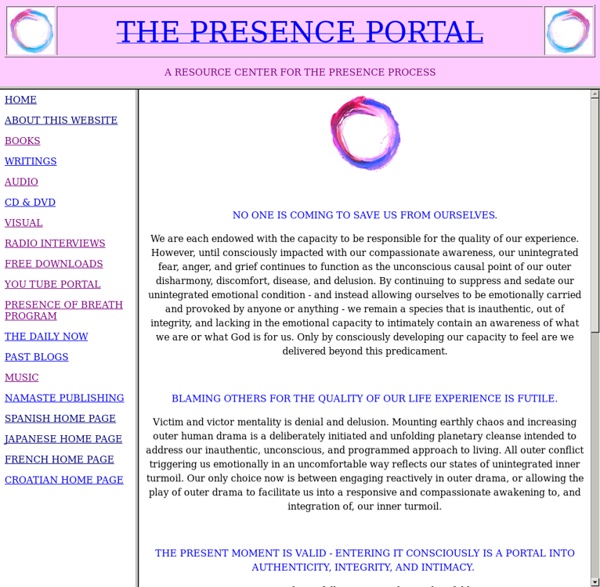 Spirituality in Healing - NICABM - 2012 Here’s what practitioners said about NICABM's programs “This talk offered me one of the most enlightening perspectives I've heard from the counseling field. I'm really excited about this information!” Kim Taff, EdS, LPC, Counselor Atlanta, GA “Thank you for bringing forward the best in research and applications to practice! Patrick Goff, EdD, Licensed Psychologist/Educator Roseau, Commonwealth of Dominica "What an outstanding call - full of understandable physiological information, implications for our clients, and ideas for therapy and intervention. Joanne Williams, Social Work Gilston, Australia I Don't Think I'm Alone I can’t think of anything more powerful or more necessary – especially right now – than becoming a more spiritually enlightened practitioner. Of the thousands of you who responded to our recent survey, over 92% of you felt that at least some of the time, your patients' problems were rooted in spiritual issues. You also told us that you wanted to know: NNorth York, Ontario, Canada

Jules Romains Jules Romains, born Louis Henri Jean Farigoule (August 26, 1885 – August 14, 1972), was a French poet and writer and the founder of the Unanimism literary movement. His works include the play Knock ou le Triomphe de la médecine, and a cycle of works called Les Hommes de bonne volonté (Men of Good Will). Jules Romains was born in Saint-Julien-Chapteuil in the Haute-Loire but went to Paris to attend first the lycée Condorcet and then the prestigious École normale supérieure. He was close to the Abbaye de Créteil, a utopian group founded in 1906 by Charles Vildrac and René Arcos, which brought together, among others, the writer Georges Duhamel, the painter Albert Gleizes and the musician Albert Doyen. He received his agrégation in philosophy in 1909. In 1927, he signed a petition (that appeared in the magazine Europe on April 15) against the law on the general organization of the nation in time of war, abrogating all intellectual independence and all freedom of expression. Unanimism[edit]

Why you resist letting go of your negative feelings Have you ever noticed that sometimes you have a hard time letting go of a negative emotion that feels really painful, an emotion you wish you could make disappear? In today’s post I’ll explain why that happens and also give you a few techniques to lessen the intensity of those unpleasant feelings. (I provided one such technique in an earlier post, Why we resist letting go of painful feelings When a man says: “I am a man, or a woman says: “I am a woman”, they are describing who they experience themselves to be. The same is frequently true for our intense emotions. There’s another reason it can be hard to let go of a negative feeling. How to lessen the intensity of your negative feelings In the blog post in which I describe my recent upset I offered you one technique for lessening the intensity of your emotions. 1. 2. 3. This week’s exercise Copyright ©2012 Morty Lefkoe

Emilio Del Giudice Last Updated on Wednesday, 18 July 2012 16:24 Wednesday, 11 July 2012 07:26 Written by Administrator Prof. Emilio Del Giudice PhD Emilio DelGiudice from Korotkov.tv on Vimeo. • Born the 1/1/ 1940 in Napoli, Italy• Graduated in Physics the 14 Dec 1961 at the University of Napoli with honours• Postgraduate Degree in Theoretical and Nuclear Physics at the University of Napoli in July 1965 with honours. - Positions at the Faculty of Sciences of University of Napoli:-Assistant Professor of Theoretical Physics from 1963 to 1976-He has taught the following courses:-Theory of Nuclear Forces in the Academic year 1966-67-Elementary Particles Physics in the A.Y. 1967-68-Physics for Geologists from 1972 to 1974 -He has been Research Associate of the National Institute of Nuclear Physics (INFN), Milano branch from 1976 to 1988 and Senior Scientist from 1988 to November 2006, when he retired. -Research interests: a. Emilio Del Giudice, Water conference 2011

New York Open Center Online Learning Webinars Experience outstanding holistic programs, body, mind and spirit, from anywhere in the world with Open Center Online Learning webinars. Check out below our season of compelling live webinars with outstanding presenters. A computer and a broadband connection are all you need anywhere on the planet to enjoy this relaxing, intimate and engaging approach to holistic learning from your home, office, or vacation site. By registering, for each webinar event you will receive the following: 90 minutes of live, interactive webinar content.30 minutes of question-and-answer time with the teacher.30-day access to download a recording of the complete webinar, after the event. (Free software provided to view.) Computer System Requirements If you can watch YouTube videos, you can attend this webinar online. Drew DiVittorio, Dipl (NCCAOM) Join one of the Open Center’s most popular speaker on nutrition and herbalism for an webinar introduction to two vitally important topics of Oriental medicine. Laura Saba

Émile Coué Émile Coué de la Châtaigneraie (French: [emil kue də la ʃɑtɛɲʁɛ]; February 26, 1857 – July 2, 1926) was a French psychologist and pharmacist who introduced a popular method of psychotherapy and self-improvement based on optimistic autosuggestion.[1] Considered at times to represent a second Nancy School, Coué treated many patients in groups and free of charge.[2] Life and career[edit] Coué's family, from the Brittany region of France and with origins in French nobility, had only modest means. A brilliant pupil in school, he initially studied to become a chemist. However, he eventually abandoned these studies as his father, who was a railroad worker, was in a precarious financial state. Working as an apothecary at Troyes from 1882 to 1910, Coué quickly discovered what later came to be known as the placebo effect. In 1901 he began to study under Ambroise-Auguste Liébeault and Hippolyte Bernheim, two leading exponents of hypnosis. The Coué method[edit] General[edit] Underlying principles[edit]

Sudarshan Kriya | Rhythmic Breathing Technique | Yoga Meditation Sudarshan Kriya incorporates specific natural rhythms of the breath which harmonise the body, mind and emotions.This unique breathing technique eliminates stress,fatigue and negative emotions such as anger,frustration and depression, leaving you calm yet energised,focused yet relaxed. Emotions affect the breathing pattern. For example, when you are: Angry: Your breath comes in short, quick cycles.Sad or upset: Your breath comes in long and deep cycles. Breath is the link between the body and the mind. This is where SudarshanKriya comes in. Sudarshan Kriya harmonises the whole system cleansing daily and accumulated stresses, one feels happy and healthy again! Millions of people from all walks of life have been touched by the healing power of the SudarshanKriya. "We need to do a cleansing process within ourselves.