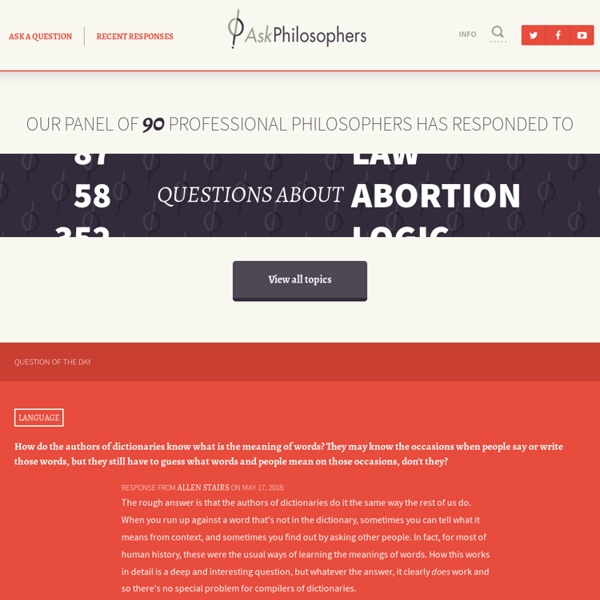 <h3>You appear to have javascript disabled. Please enable javascipt to use this site's full functionality.</h3><br /> We have recently published our second book, What Should I Do? Philosophers on the Good, the Bad, and the Puzzling

KOHLBERG'S STAGES OF MORAL DEVELOPMENT Lawrence Kohlberg was a moral philosopher and student of child development. He was director of Harvard's Center for Moral Education. His special area of interest is the moral development of children - how they develop a sense of right, wrong, and justice. Kohlberg observed that growing children advance through definite stages of moral development in a manner similar to their progression through Piaget's well-known stages of cognitive development. His observations and testing of children and adults, led him to theorize that human beings progress consecutively from one stage to the next in an invariant sequence, not skipping any stage or going back to any previous stage. 17 Web Toys for Your Procrastination Pleasure Sometimes you need to take a break from work and just veg out by doing something mindless and pleasant. TV or a game of solitaire is good for that, but both require a set time commitment. There are hundreds of alternatives on the internet in the form of web toys. These are sites that offer strange visuals, often interactive visuals, that require no real mental effort but might bring a smile to your face for a while.

THE STONE - Opinionator This is the second in a series of interviews about religion that I am conducting for The Stone. The interviewee for this installment is Louise Antony, a professor of philosophy at the University of Massachusetts at Amherst and the editor of the essay collection “Philosophers Without Gods: Meditations on Atheism and the Secular Life.” Gary Gutting: You’ve taken a strong stand as an atheist, so you obviously don’t think there are any good reasons to believe in God. But I imagine there are philosophers whose rational abilities you respect who are theists. How do you explain their disagreement with you? Are they just not thinking clearly on this topic?

The History of Philosophy … Without Any Gaps On Monday, we told you where you can download Free Courses from Top Philosophers (Foucault, Searle, Russell and the rest). As the day went along, our list grew thanks to reader suggestions, and we also discovered another promising resource — a podcast called “The History of Philosophy Without Any Gaps,” created by Peter Adamson, Professor of Ancient and Medieval Philosophy at King’s College London: Beginning with the earliest ancient thinkers, the series will look at the ideas and lives of the major philosophers (eventually covering in detail such giants as Plato, Aristotle, Avicenna, Aquinas, Descartes, and Kant) as well as the lesser-known figures of the tradition.

The Mortality Paradox by Maria Popova “Our overblown intellectual faculties seem to be telling us both that we are eternal and that we are not.” “It is quite impossible for a thinking being to imagine nonbeing, a cessation of thought and life,” Goethe, who ceased to be 181 years ago this week, proclaimed as he concluded that “in this sense, everyone carries the proof of his own immortality within himself.” Hume and Kant The 1700s saw many great thinkers who have left a lasting impact on modern philosophy and science -- and psychology. But there were two who would, between them, define the nature of science, especially psychology. They are, of course, David Hume and Immanuel Kant. David Hume was born April 26, 1711 in Edinburgh, Scotland. His father died the following year and left the estate to his eldest son, John.

Albert Bandura Albert Bandura (born December 4, 1925) is a psychologist who is the David Starr Jordan Professor Emeritus of Social Science in Psychology at Stanford University. For almost six decades, he has been responsible for contributions to many fields of psychology, including social cognitive theory, therapy and personality psychology, and was also influential in the transition between behaviorism and cognitive psychology. He is known as the originator of social learning theory and the theoretical construct of self-efficacy, and is also responsible for the influential 1961 Bobo doll experiment.

Conversations on the Intersection Between Faith and Science The award-winning public radio program On Being, with Krista Tippett, has provided us with in-depth audio interviews on the intersection between faith and science with a range of guests including theoretical physicists and Vatican Observatory astronomers. Listen below and use the comments section to add your voice to the conversation. Freeman Dyson and Paul Davies on Einstein’s God Albert Einstein’s quip that “God does not play dice with the universe,” was about quantum physics, not a statement of faith. But he did ponder the relationship between science and religion and his sense of “the order deeply hidden behind everything.” Freeman Dyson and Paul Davies, both theoretical physicists, join Krista Tippett to explore Einstein’s wisdom on mystery, eternity and the mind of God.

Dale Carnegie Dale Harbison Carnegie (/ˈkɑːrnɪɡi/;[1] spelled Carnagey until c. 1922; November 24, 1888 – November 1, 1955) was an American writer and lecturer and the developer of famous courses in self-improvement, salesmanship, corporate training, public speaking, and interpersonal skills. Born into poverty on a farm in Missouri, he was the author of How to Win Friends and Influence People (1936), a bestseller that remains popular today. He also wrote How to Stop Worrying and Start Living (1948), Lincoln the Unknown (1932), and several other books. One of the core ideas in his books is that it is possible to change other people's behavior by changing one's behavior toward them. Biography[edit]